Manet invented modern art, and a huge new show in Paris sets out to prove it. But how straightforward is the exhibition in its approach? 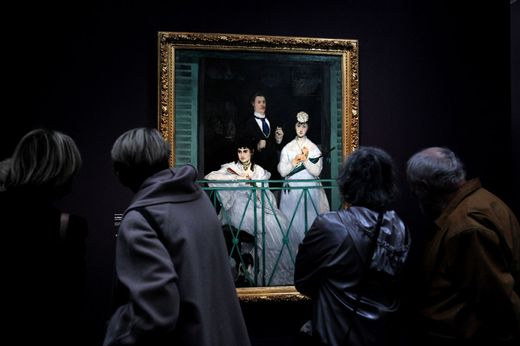 There is a game people like me play at dinner parties that involves deciding on the identity of the first truly modern artist. The game consists chiefly of vacuous and circular argument. And, of course, there is never a proper winner. Some art types will go to their graves shouting Goya. Others never shift from the Courbet camp. I have even heard the occasional scholarly defence of Delacroix. It’s a silly game, but not necessarily a complete waste of time. During these circular and unwinnable arguments, certain bigger truths can become clearer. Difficult things need to be defined. Trends have to be thought about.

Deciding what constitutes “being modern” is in itself a topic that can carry a conversation from dusk till dawn. Yet whatever the journey, for me the conclusion is always the same. For me, the man who invented modern art is always Manet.

So confidently do I believe this to be true that a couple of years ago I made a film for the BBC called Manet: The Man Who Invented Modern Art. How heartening, therefore, and how mildly perplexing, to see that this year’s big spring offering from the Musée d’Orsay, in Paris, is a show entitled Manet, The Man Who Invented Modernity. I will have to see if I can get my DVDs into the shop.

Anyway. Was there really a point at which the old world became a modern one? What, also, does being “modern” actually mean? Since, on this occasion, we do not have all night to discuss it, let us clutch immediately at the handy straw that is Charles Baudelaire. The great poet of Les Fleurs du mal (my candidate, by the way, for the title of the first modern writer) was so exercised by exactly these matters that, in 1863, he published a famous essay called The Painter of Modern Life. In this spectacularly impactful tract, Baudelaire asked for a painter to appear who would treat the present with the same reverence the old masters had lavished on the past. “The lover of universal life,” trilled the excited Baudelaire, “moves into the crowd as though into an enormous reservoir of electricity. [He is] a mirror as vast as the crowd itself.”

The Musée d’Orsay has an entire thematic section devoted to Baudelaire’s call, as you would expect. Every art-history student is made familiar with it in year one of their studies. Yet the poet’s plea was triggered by a particular set of circumstances. The French art world had ossified. In mid-19th-century Paris, too many pretentious classicists were painting too many gods and helmets. And if you didn’t paint gods and helmets, you were out. As, once again, we do not have all night here, we should look quickly across at our own art world for a parallel and note the all-powerful role of the Tate. What the Tate says goes, right? If you disagree, you are out, right? So it was in mid-19th-century France, where the Tate of the times, the Paris Salon, drew the crowds and made the rules. And those rules insisted that art needed to be good for you, slickly painted and set in the past. Helmets were in. Top hats were out.

Baudelaire’s breakthrough came, paradoxically, with the acceptance of his own decadence, with facing up to the fact that his darkest thoughts were as valid, creatively, as his most noble ones. As he put it in Les Fleurs du mal: “If rape or arson, poison or the knife/Has wove no pleasing patterns in the stuff/Of this drab canvas we accept as life/It is because we are not bold enough!” For Baudelaire, the essence of modernity had nothing to do with the invention of trains, or the coming of the paint tube, or the rebuilding of Paris, or any of the more obvious signs of progress that littered his era. For him, modernity was a state of mind, an acceptance that your world was as valid, as momentous, as meaningful as the past. That was the eureka moment.

Manet, an intimate friend of Baudelaire’s, was never named as The Painter of Modern Life, but he fitted the bill perfectly. His subject matter was so clearly drawn from the world around him that it went beyond clarity into the realm of confrontation. His most notorious painting, Olympia, almost gave Paris a collective heart attack when it appeared at the Salon of 1865. Olympia featured a naked prostitute reclining on her bed and giving you the come-on in a pose borrowed with spectacular obviousness from Titian’s Venus of Urbino. What was more shocking here: the fact that this naked hussy from Montmartre was mocking one of art’s most hallowed Venuses, or the fact that you, sir, the typical Salon visitor, are being cast in the role of her next client?

The Musée d’Orsay chooses to downplay the provocative side of Manet, however, and seeks in this display to lower-case Olympia and present her instead as part of a cluster of thoughtful reconsiderations of the modern world that includes also Déjeuner sur l’herbe, his second most notorious nude. I had the feeling these special paintings were being deliberately prised back into the pack. Which I don’t think is right. As Baudelaire understood, and the organisers of this event seem not to, sex is not an ordinary aspect of modernity; it is not just another subject. Sex is central to the switch in consciousness that defined Manet’s revolt. Olympia flashing her bits at the 19th-century bourgeois marks the official end of an era of pretence: it was as much of a coming out as The Origin of Species. If you don’t believe me, go and look at any modern magazine rack.

Manet was the man who invented modern art, not only because he painted what was there, but because he did it with such obvious, Hello!-cover relish. When Manet exclaimed “Look at the world!”, he was also exclaiming “Look at me!” His technique, too, was right for the times, quick and dashing enough to capture the movements of the “enormous reservoir of electricity”. With Manet, there is always an acceptance that art is a language of expression, not of mimicry. That painting is not copying. If something feels as if it should be bigger, make it bigger. If it feels as if ought to be over there, put it over there.

The Musée d’Orsay show probably agrees with some of this. It’s hard to tell. One thing this is not is a straightforward reading of Manet, or of modernity. Instead, we are treated to one of those stop-start journeys of discovery in which a legible chronology is suppressed in favour of a hopeful cluster of themes. One section is devoted to the influence of Baudelaire, another to the impact of Manet’s teacher, the salon painter Thomas Couture, who regular Orsay visitors will recognise as the painter of the world’s biggest picture of a Roman orgy. You can’t miss it. It takes up a large chunk of the Orsay’s ground floor.

Another section deals with the appearance in Manet’s art of the alluring Berthe Morisot, the dark-eyed impressionist femme fatale — in his portrayals of her, at least — who gazes down at us from The Balcony, his big reworking of a big Goya. In contrast, near the end of the show, there’s a section devoted to his small and delightful still lifes, to which the organisers have appended a stern warning: “Manet did not consider his still lifes in the way we do today, in thrall to an absurd relativism that scarcely gives Olympia any more importance than the artist’s first idealised piece of asparagus.” Ouch. Do not like these asparagus pictures too much, is the message. Manet should be considered on more serious terms.

There are nine mini sections in all, nine bits of jigsaw trying unsuccessfully to form a picture. The last big Manet exhibition in Paris, the eminently legible retrospective of 1983, was one of the best such shows I have seen. Since then, alas, exhibition-making has changed course. These days, events of this heft are reluctant to make a point. Instead, they open the kitchen, give you the ingredients and leave you to do the cooking. It’s like filling in your own tax return. Enfranchisement? Or passing the buck?

The problems here begin at the start, in the first section dealing with the influence of Couture, with whom Manet studied from 1850 to 1856. Quite rightly, the Orsay questions whether such a lengthy apprenticeship can possibly have been negligible and demands that we note instead how Manet inherited Couture’s awareness of the historic duty of art, as well as some of his brush strokes. To this end, late Coutures have been mixed in with early Manets, so that one blends into the other, and this viewer, at least, had difficulty telling them apart. I suppose it was meant to be telling. It just felt annoying.

The Couture comparison turns out to be part of an exhibition-long attempt to make Manet appear more typical and less different: more conservative, less revolutionary. Another of the special sections, called A Suspect Catholicism?, deals with the sudden spate of religious pictures he produced around 1865, in the same years as Olympia. A dead Christ surrounded by angels; a praying Franciscan monk; Christ being mocked by the Roman soldiers. Most modern critics have dismissed them as ugly aberrations. These organisers see them as the handiwork of a painter “respectful of the inviolable rights of individual faith and the teaching of the gospels”. Which I have to say I think is pure bunkum. Not only was Manet conspicuously not the gospel-loving type, but the most obvious thing about these harsh slabs of religious realism is their glaring sense of anachronism. Manet is painting these not because he is a gospel-lover, but because he is once again goading the old masters. Taking them on. Not very successfully.

Alas, it is an obvious weakness of this show that it tries so hard to say something new, it ends up saying nothing coherent. A particularly dodgy section, called The Trap of Impressionism, tries to argue against the usual view that Manet inspired the impressionists and learnt about pictorial looseness from them in return. This event insists instead that he was already heading towards impressionism by 1860, and that, “rather than adopting the emerging aesthetic, Manet adapted it for his own purposes, for which the Salon remained the ideal place”. Somehow, his impressionism is being presented as further proof of his conservatism.

The most conspicuous attempt to understand Manet as a Salon-chaser, however, comes in the final section, entitled, fittingly, The End of the Story? In fact, most of the pictures included here come from the beginning of his career, from the great Manet decade of the 1860s. When you get rid of chronology, the temptation to press square pegs into round holes becomes irresistible. All through this display, the wrong images seem to be making the wrong point in the wrong place.

Unfortunately, Manet’s most ambitious attempt to paint a lofty and telling description of the history of his own times, The Execution of Maximilian, is one of many notable pictures that have not been lent to the show. Instead, it is left to a lesser painting, The Battle of the Kearsarge, an intriguing rather than explosive view of a minor naval skirmish that took place off Cherbourg in 1864, to make the point. It’s just not a great enough picture to pull it off.

Is the show worth seeing, nevertheless? Of course. Go tomorrow if you can. Any collection of Manets is worth travelling a lot further to experience than Paris. But if this is the new Manet — a conservative, Catholic, gospel-loving Salon-hugger —then give me the old one any day.