What links a little-known Italian artist, Shakespeare and red trousers? A painting of cheese eaters, with a bitter aftertaste 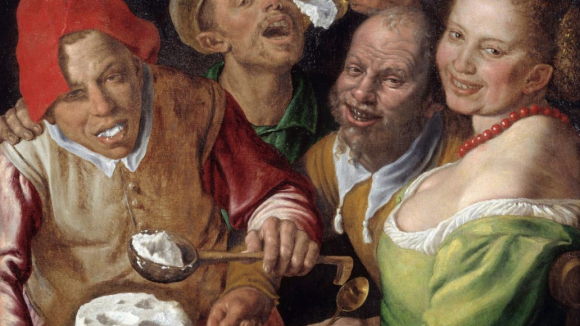 All the world’s a stage,” Jaques famously declares in As You Like It, “and all the men and women merely players.” It’s unlikely, of course, that Shakespeare had The Ricotta Eaters by Vincenzo Campi specifically in mind when he wrote those words in 1599, but it’s possible Campi-like thoughts were churning round his head. Foolish people leading foolish lives, hopes dashed, greed expressed — it’s all eminently Shakespearean.

Since we appear to be living through the Age of the Quiz — phoning a friend, counting the numbers, feeling pointless — here’s a quiz question prompted by the Campi picture. What have The Ricotta Eaters and the number six got to do with Shakespeare and his trousers? The answer will emerge, I hope, during this rumination.

You’ll be thinking: who is Vincenzo Campi? Most will never have heard of him. I have been studying art history for several decades, but only encountered him recently. Campi (1530-91) was from Cremona, the beautiful city in Lombardy, northern Italy, that later gave us Antonio Stradivari, the genius of the stringed instrument. He began as a religious painter, but he wasn’t much good at it. So he switched to what art historians call genre pictures — scenes of everyday life. And suddenly he blossomed.

Cremona’s contribution to art has generally been ignored in art historical summaries, but around Campi’s time — the 1570s and 1580s — interesting things began to happen there. Two qualities you don’t associate with Italian art began to get an airing.

The first of these is comedy. As the Renaissance slumped to an end and the baroque age picked up steam, in Cremona artists began painting pictures that made fun of others. They mocked them. Took the mickey. This Lombardic sarcasm would find its most famous expression a decade later in the early work of Caravaggio, who would have known and admired Campi. Caravaggio’s drunken Bacchuses and cheating cardsharps had their origins in this curious interstitial moment of mickey-taking in Cremona.

The second unusual quality Campi brought to Italian art was an appetite for lowly realities; a taste for slumming it. Throughout the Renaissance Italian art had been hunting for perfection, balance, order and grace. But as the 16th century began to peter out and the 17th century began to loom, the doubts started crowding in. It’s what happens during fins de siècles. The prospect of the future makes the present feel uncertain. Things get edgy. Solids start to crumble.

Painted in about 1580, The Ricotta Eaters is a brilliant example. These days fresh ricotta is a culinary rarity in Britain, found in Soho delicatessens and on the cheese counter at Waitrose. This creamy cottage delight, with delicious hints of sweetness, is perfect for making cheesecake. But in Campi’s time the only people who ate ricotta were the poor. It’s a waste product, created from the whey left over from the production of other cheeses. “Ricotta” means “recooked” in Italian. It’s peasant food. And Campi’s peasants can’t get enough of it.

You can tell they are peasants from their teeth. Before the baroque age, you hardly ever see teeth in art. All those kings, queens, popes and princes in Renaissance art keep their mouths shut. Showing your teeth is animal behaviour. It reveals a lack of grace and politeness. Plus, if you were rich enough to have your portrait painted, you were rich enough to eat lots of sugar, and your teeth would have decayed into blackness.

Campi’s peasants have no such problem. They cannot afford Turkish delight or cakes. So they guzzle their ricotta with open mouths and happily signal their base origins with their teeth. I love their beaten-up faces. Wrinkled and sunburnt from the fields. Full of character and mischief. Faces as characterful as these would soon become commonplace in art. Caravaggio would become notorious for finding his models in the back streets of Rome. Yet Campi in Cremona is doing it two decades earlier.

Something else he does here is to include himself in the picture. One of these figures is a self-portrait. Which one? It’s obviously not the woman on the right, in the low-cut wenchwear. With her pushy smile and her chunky coral necklace, she’s obviously trying to involve you, the viewer, in a game of temptation. Yum-yum. Fancy a bit of ricotta?

The old boy second from the right is a delightfully painted old scoundrel, so he’s a possibility. He’s darker than the rest as well. He’s been working in the fields. That makes him the poorest. The richer you are, the less you work. Third from the right is the most wicked. The way he’s waving that huge clump of ricotta at us is taunting and sneering. Don’t like the look of him at all. But no, that’s not Campi.

He’s the figure on the left, the mad-looking one with the red cap who’s stuffing his mouth with ricotta and is about to be sick. This is where Shakespeare comes in, and the number six, and the trousers. It’s all about the red cap.

In the famous “All the world’s a stage” speech, the philosophical Jaques counts down the seven ages of man, from infancy to old age. Stage number six is the one that counts here. “The sixth age shifts into the lean and slipper’d pantaloon,” Jaques grumbles, referring to a stock character in the commedia dell’arte called “Pantalone” in Italian or “Pantaloon” in Elizabethan English.

Pantaloon is a greedy and lascivious hunchback who clings on to his money and who is identified on stage by his red hat and baggy red trousers. The word “pants” comes originally from “pantaloon”, because of those notorious trousers. So Shakespeare is identifying our sixth age as an age of greed, decrepitude and lechery. The age before the end. And Campi is doing the same. He too is counting down the minutes for the greedy Pantalone.

Yup. That’s the future. And if you look at the big lump of ricotta in front of Campi’s Pantalone, from which they have all been taking big scoops, you’ll see that it secretly forms the shape of a skull. The mad ricotta eating has brought death to the table. With this eerie piece of culinary symbolism, Campi has smuggled a dark message onto his comic stage.

And by casting himself as the mad-eyed Pantalone, he has made it personal.