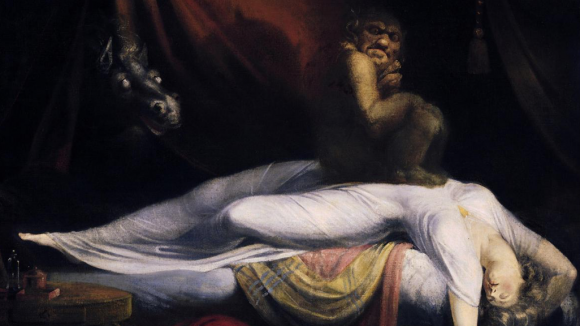 Apparently we’ve been dreaming more during the Great Lockdown. It’s been one of the unforeseen positives of enforced isolation, alongside bluer skies and goats wandering into Llandudno. Speaking for myself, I have definitely been dreaming more tangibly and waking up with clearer memories. Faces from the past. Unexpected visits to strange places. It’s all rather exciting.

For an art critic this closer contact with the dream world is a big plus. Henry Fuseli, the weird Anglo-Swiss artist on whom we’ll be focusing in a moment, complained that dreams are “one of the most unexplored regions of art”. Indeed they are. I would go further. I reckon dreams can probably be understood as the progenitors of all art.

To follow my thinking on this you’ll need to join me on a journey through time —back, back, back we tumble, into prehistory, to the very beginning. You and I are a couple of cave dwellers in the Kalahari desert. Physics, chemistry, astronomy, biology, psychology and English have not yet been invented. Books have not been invented. Maths has not been invented. Everything around us is a great big mystery. We’ve spent the whole day hunting and gathering. Now we need to sleep.

Imagine waking up the next morning in the rock shelter and vividly remembering the dreams you have just had. Of course you don’t know they’re dreams, because language hasn’t been invented yet, let alone oneirology. All you know is that you’ve been somewhere else, where strange things happened. Perhaps you were chased by a rhino and couldn’t get away. Perhaps a bear came and sat on your chest, just like Fuseli’s ghastly gremlin sits on the unfortunate female dreamer in The Nightmare, the picture that made him famous, and which he showed at the Royal Academy in 1782.

Back in the cave everything is exactly where it was when you fell asleep, yet you have been somewhere else. Where the hell was it? The morning sun is casting flickering shadows on the cave wall, and you fancy you recognise the rhino. Or is it a bear? And you tiptoe to the wall and press your hand against it, because there’s nowhere else you could have been, so it must have been somewhere beyond here. To leave your mark on the flickering portal, to prove your attendance, you work up the saliva in your mouth, chew in some of the red earth under your feet and spit it out in a spray. It’s the Kilroy instinct. It’s as old as we are.

So, cave buddy, that’s the potholing done. Let’s get back to the future. The latest thinking on the origins of art is that it was made by tribal shamans and that we should understand it as a communication with the world of the gods. That appears to be what was going on among the San people of southern Africa, who are not only our ancestors, but whose direct descendants are still there, still living in the Kalahari, still providing an unbroken link with the first artistic impulse.

San shamans would enter the dream world using artificial means; by drinking hallucinogenic potions or dancing themselves into a trance. Once there in the other reality they could influence things: heal people, bring rain, ensure good hunting. They could also come back and describe what they had seen. The better they were at drawing, the more powerful their magic. So the rock art they made, the depictions of eland and ostrich, the water patterns, the pictographs, the petroglyphs, can be understood as an effort to visualise crucial encounters in the world beyond. Which is pretty much what Fuseli is also doing.

Now, there will be heavily gonged anthropologists reading these approximations of mine and fuming at the suppositions. Art types won’t be liking it either, because if there’s one word that is guaranteed to discommode an art type, it is that waterboard of a word: shaman. I remember attending a couple of performances by Joseph Beuys, the kaiser of conceptual art, during which he made his identification with shamans woodenly explicit. And even I, generous art observer though I am, felt queasy at the comparison.

Enough, though, of this prehistoric scene-setting. You will want to know why Fuseli painted The Nightmare. What’s he trying to say in it? And, perhaps, what it has to do with Brian Sewell. Not much, is the answer to the last. On the cover of his collected bad reviews, Brian stripped off and posed as Fuseli’s naked incubus, hunched down on a sleeping virgin. It put me off buying the book.

Fuseli (1741-1825) was something of a dream specialist. Having been born into the Age of Enlightenment, his perverse contribution to his times was to top up its levels of weirdness. He illustrated lots of Shakespeare and specialised in the scenes involving fairies or witches — A Midsummer Night’s Dream, the darkest bits of Macbeth. He did Milton too, and transparently enjoyed our fall from grace and the rise of Lucifer. When the Age of Enlightenment needed a respite from reason, it turned to Fuseli. 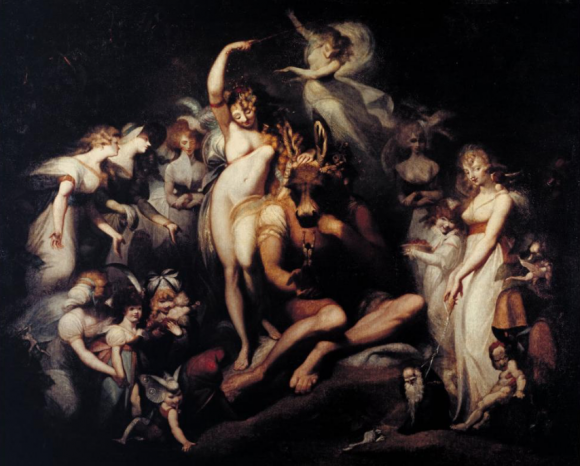 The Nightmare is both a picture of a woman having a bad dream and the bad dream itself. The poor girl in the white nightie has fallen into a sleep so deep that it looks like death, and while she’s comatose a creepy little ape-man has climbed onto her chest and crouched there. It’s pretty clear what he wants to do — he’s a grim little incubus after all. But we seem to have surprised him, so he has paused his ravaging and turns abruptly towards us.

To make the notion of a nightmare more concrete, a black horse has poked out its head from behind a curtain and seems also to be eyeing the girl. In fact the word nightmare comes from the Old Norse mara, rather than mare, and was the name of a wicked female spirit who rode around on the chests of sleepers, suffocating them. It’s that sensation of sleep paralysis.

Originally from Switzerland, where he was Johann Heinrich Füssli, Fuseli brought with him to London a gnomic fondness for Norse fairy tales and bleak German ideas that suit the dark. He was a strong influence on William Blake, although Blake is never as sexually explicit in his imaginings as Fuseli is in The Nightmare. After its unveiling at the Royal Academy in 1782, the picture became sensationally popular. Prints of it made Fuseli rich. It was in such demand that he painted three more versions of it.

No one has managed convincingly to explain what he was trying to say in the painting. There’s been some confused art historical mumbling about a failed love affair with a friend’s niece that he was trying to get over. But it’s one of those pictures that your nerve ends understand immediately, although your brain never does. I can’t say I like it. But it leaves its mark.