Chantal Joffe is 49. Youth is behind her. Old age lies ahead. She’s on the seesaw between the two, balancing this way and that, in those unsteady years when you are defined by the things you are not. You’re not young. You’re not old. The only solids are the absences.

I point this out so ungallantly because it’s the overwhelming subject of Joffe’s new exhibition. The entire show is a kind of vanitas project: an extended rumination about the fragile brevity of life. Joffe has always looked at herself and her family — they are the subjects for which she is best known — but never previously has it been so obvious that time and its cursed passage are a dominant concern. 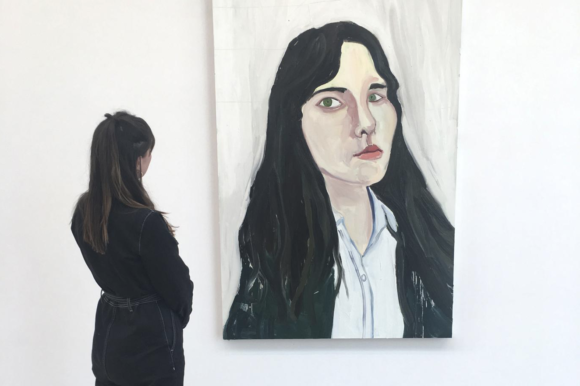 Appropriately, the exhibition is divided into two halves. A selection of self-portraits is on show at the West End branch of the Victoria Miro gallery; while pictures of Joffe’s daughter and her friends are on show in the East End branch. I don’t know how conscious the gallery was of this excellent symbolism — setting sun in the west, rising sun in the east — but it adds a dab of pertinence to the event.

The self-portraits, 30 of them, arranged in a relentless row, are where the bad news is concentrated. Harsh, angry, busy, nervy, they were painted in dark circumstances about which the gallery paperwork is unusually frank. Joffe, we are told, had just separated from her husband of many years. On January 1, 2018, “the worst day of the year”, she decided to paint a self-portrait every day as a kind of self-medication. The results surround you and stare at you from the circumference as if you are the prisoner and they are the guards.

It’s edgy stuff. Joffe is famous for painting big pictures, but everything here is the size of a small bathroom mirror into which she stares so furiously. And how tough she is on herself. The jowls. The furrows. The sagging. Thirty self-portraits and not a single smile, as Joffe searches for blackheads on the unmade-up face of a woman suspended between states.

As if to prove that you wake up different every day, there is plenty of variety in these insistent masks. Some look like the handiwork of minutes; others as if they took most of the day. The faces twist left and right, the lighting switches from kind to cruel, the variable outline of Joffe’s head changes contours like a post-Soviet map of Europe, but in all these shifts and twitches, her angry black eyes — wide open and staring — remain pinned on you. “Wait a minute,” I felt like stuttering as they hunted me around the room, “I’m not your husband.”

To be honest, it was a relief to get out of there. Not just because of the fierceness of the moods, but because Joffe possesses such an elegant and expansive touch as a painter, and the small self-portraits seemed to imprison it. It was like watching a racehorse in a bird cage.

The second show, at the larger East End gallery, is much more like it. The paintings are bigger. And most of them feature Joffe’s teenage daughter, Esme, perched interestingly between childhood and womanhood, being examined with instinctive empathy by her mother. The gallery paperwork tells us the artist is concerned here with capturing “the vulnerability and coolness of youth”, but I had the insistent impression that Esme was also a stand-in for Chantal, and that this, too, was a kind of nostalgic self-portraiture.

It’s certainly tremendous art, full of subtle questions about teenage awakenings. Esme stretched out on the sofa is probably just watching Dinner Date on the telly, but her pose is reminiscent enough of the reclining Venuses of the Old Masters to raise awkward issues of unfolding adulthood. Esme in Her School Uniform stands there sulkily, as if she’d rather be posing in her weekend wear. Esme on the Blue Sofa II shows her sitting uncomfortably on the edge of the seat, in a painting that grumbles: “Please, Mum. It’s been ages. Can I go now?”

On this scale, the brilliance of Joffe’s paintwork gets the space it needs to impress. She’s not quite in the Sean Scully league when it comes to oversized brushwork — thank God — but there is something almost Manet-like in her ability to capture subtle and nuanced effects with brushstrokes 2in wide. If Bake Off ever did an artists’ special, Joffe would be a cert to win the icing section.

This sensuous pleasure in applying paint makes her clothes, walls and skies a joy to lean into. Some artists treat their backgrounds as the first part of a process. Joffe treats them as the finale, and saves some of her best fencing moves and most subtle colour combinations for her interstitial clearings.

At the Kate MacGarry gallery, the endlessly inventive Marcus Coates treats us to another of his madcap defences of the natural world. As slippery as a snake, as impish as a hare, as nimble as a gibbon, Coates has always been on the side of the animals in the wars of ecology. But he seems also to be particularly sensitive to the influence of the moon, and it is this touch of lunacy that makes him so entertaining.

His best-known works, his performances, involve the putting on of absurd animal costumes and lots of crazy yelping, as if he were getting in intimate touch with the animal within. His gallery shows, however, are less actively ridiculous. Indeed, they tend towards the calm and the minimal, and impress not with their nuttiness, but with their artistic precision.

The new show is a clear example. All the pieces have as their underlying subject the destruction of the natural world that we chest-thumping gorillas are so noisily engineering. But the points are made with haiku-sized poetry and an art that is usually delicate and white. 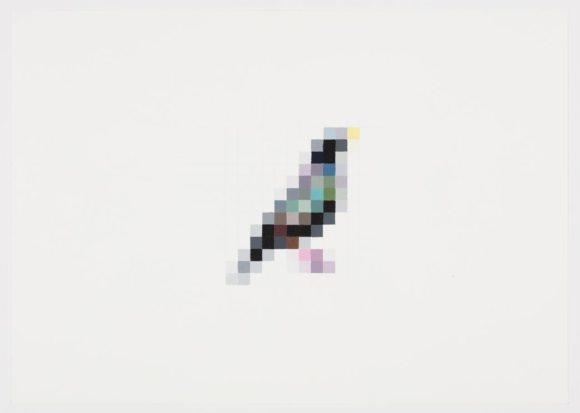 In a series of new sculptures, the artist’s hands, cast in plaster, twist themselves into the silhouettes of various extinct animals. A squat shape created with fists and fingers is the golden toad, which became extinct in Costa Rica in the 1980s. The long-necked bird is the moa, hunted to extinction in 15th-century New Zealand. The lumpy thing with the horn, that’s the western black rhino, the most recent loss, poached into nothingness in 2011. Thus, that old fireside pastime of creating magical likenesses with your fingers becomes a vehicle for fierce artistic accusation.

Arrivals/Departures is a word piece originally installed at the railway station in Utrecht. Instead of train times, the digital calendar informed passengers of the animal activity going on around them on that particular day of the year. The day I visited, dingy skipper butterflies were expected to fly and coots were expected to nest. Utrecht’s busy commuters were sneakily imprinted with the lost realities of the natural world.

Bravo Marcus Coates. Will some big museum in Britain please give this man the significant retrospective he deserves?