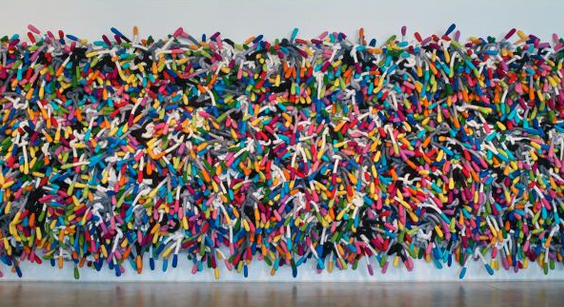 There are some very good reasons to visit Margate. The blowy walk along the beach. The cafe on the jetty that sells crab sandwiches. The famous Shell Grotto, with its spooky origins and its mysterious underground shinings.

For art lovers, there is the added attraction of this being Turner’s town: the spot where he first saw the sea. It is also Tracey Emin’s town. In her early work, she called herself Mad Tracey from Margate and added, outrageously: “Everyone’s been there.” Nobody has done more than Emin to put Margate and its voice on the cultural map.

So those are the good reasons for visiting. Where it becomes more complicated is in assessing the value of the conflicted institution known as Turner Contemporary. Perched awkwardly on the edge of the seafront, as faceless and silver as the conning tower of a nuclear submarine, the awkwardly named Turner Contemporary, designed by David Chipperfield and opened in 2011, has zero ambition to blend in with its surroundings. It’s an import from somewhere different, a shiny slab of metropolitan minimalism transported to the Kent coast like one of those extra-wide loads you sometimes see on dual carriageways.

Inside the silver conning tower, the conflict continues. Local mums and dads bring their nans here to enjoy the view from the big window in the foyer, but the exhibitions served up to them struggle mightily for relevance or adherence. The latest one, Entangled, a survey of textile art by women, is a telling example.

Textile art by women. If ever a territory had its work cut out setting the pulse racing, this is it. We live in a world where women are Nobel-winning scientists, engineers, prime ministers, jockeys, stand-up comedians, marines. Yet here is a show still enwalled by the memory of the little woman in the corner dutifully finishing her quilts and her embroidery.

What is really happening here is that the contemporary side of Turner Contemporary is seeking to ingratiate itself with the Turner side. That’s why the gift shop downstairs is packed with sewing kits, embroidery sets and stuff grannies can give to their granddaughters. Sewing is fun, giggles the merchandising, relentlessly, as it seeks to inveigle itself into mummy and daddy’s pocket.

The happy family moods continue outside the show, in its vestibule, where a colourful wall piece by Anna Ray, called Margate Knot, has been assembled from 2,000 textile wormlets sewn by local volunteers and knotted into a multicoloured 3D bathmat. As a piece of art, Margate Knot is reductive and crass: Jackson Pollock for the nursery. As a bringer of gallery joy, it works well. The squiggly bits come off and, when I visited, a friendly museum assistant was throwing them at the kids.

Unfortunately, the show for which this cheerfulness serves as an amuse-bouche turns out to have different ambitions. Glum, angsty, problematic, Entangled leaves the joys of sewing to the locals while it morosely examines the many ways in which international women artists have employed textiles in their output. Well, I say “textiles”. The first exhibit you encounter is a murky circle made from burnt cigarette papers by the veteran Romanian Geta Bratescu. Are cigarette papers a textile? 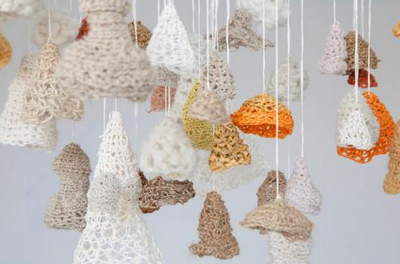 Bratescu’s grey and unhappy art dampens the happiness of the gift shop immediately, like a lorry driving through a puddle. And from here on, we stay dampened. Set mostly in the world of greys, blacks and beiges, without a stretch of shiny vinyl or a sequin in sight, Entangled has a preference for artworks that droop. Marion Baruch, also from Romania, presents pieces of black cloth from which dress-making patterns have been cut, leaving only the hanging black skeleton. Ann Cathrin November Hoibo, from Norway, knits big camouflage patterns held in place by big woollen knots.

Thank heavens Louise Bourgeois is here to add some spiky psychology to the ponchos. A creepy human hand in a glass vitrine, fashioned crudely from bright red fabric, lies there with its fingers open, like a scarlet tarantula on which the blood won’t show. Nearby, a spider’s web of spinning circles makes you dizzy with its sinister op art. Bourgeois transforms everyday textiles into the stuff of voodoo. Nobody else in the show matches the wicked intensity of her cloth art.

Baggy in its materials, baggy in its ideas, the exhibition is baggy also in its chronology. Some of its artists are dead. Others are not. Hannah Ryggen (1894-1970), a Swedish-born Norwegian, spent the war years producing propaganda tapestries in which she attacked Hitler and savaged the Hamsuns and the Quislings who were collaborating with him. Combining the immediacy of a cartoon with the labour-intensive calmness of a tapestry, Ryggen’s wall hangings offer textile proof that rage is an emotion best served slowly. A couple of galleries along, the floaty pink clouds of Karla Black, who is very much alive, have been quickly done with stuff you can buy at a make-up counter.

And that’s just about it for the good news. The rest of the show features plenty of predictable names — Phyllida Barlow, Annette Messager, Eva Hesse — but little in the way of unpredictable approaches. I buy the argument that by focusing on “textile” issues, the exhibition’s artists are seeking to define a distaff aesthetic and claiming “textiles” for themselves. I buy the argument that textiles and cloth are important signifiers of the female position. What I don’t buy is that the results have to be so frumpy, blobby, dreary. When I look out at the world today, I see women proudly, angrily and confidently redefining their cultural role. Why isn’t any of that zip reflected here?

Which brings me to Tracey Emin. She is not included. Why? Surely nobody in British art has made textiles as fierce and pioneering as Emin’s? Her shouty sewings introduced a new voice into British art: the voice of the disgruntled urban narcissist. Aside from Bourgeois, nobody here has reimagined the role of the textile in art as successfully as Emin. Yet she is missing.

To make it even more perplexing, this is her home town, where her absence feels like an insult. As I see it, there can only be two explanations. Either Emin refused to be included for dark Eminesque reasons, or the show chose to ignore her for haughty aesthetic ones. Either way, it’s a loss and a shame.

At Blain/Southern, two more enfants terribles of British art, the feral artistic couple known as Noble & Webster, have unveiled a surprising clutch of new work. It’s surprising because the self-portraits for which they are best known are usually created out of shadows and lights. In the new pieces, however, they have turned themselves into giant matchstick men, 8ft tall, with matchstick boobs and matchstick willies.

The pipe-cleaner nudes began life as wire maquettes that were then scaled up and cast in bronze. And somewhere in the transformation, their original innocence gained a fetishistic and demonic edge. Previous Noble & Webster shows have been notable for their cleverness: the skilful shaping of the shadows. Not this one. The new display has a sense of takeover about it. The enlarged Lowry figures looming over you bring that note to the gallery that scarecrows bring to a field.