A ‘retrospective’ of Gavin Turk, the most elusive of the YBAs, is rescued by its engrossing examination of our waste-filled lives 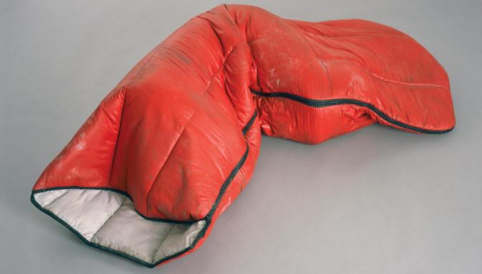 In the list of awful names for an art movement, the Young British Artists, or YBAs, commands a position near the summit. It might even be at the top. At least with the fauves, “wild beasts” in French, something was conveyed of the energy of their work. And no, the cubists did not paint cubes, they painted forms that were opened out or released, but to call them cubists did at least point us towards the idea of a reordered reality.

With the poor old YBAs, however, who set the art world alight so fiercely in the 1990s, the nomenclature they were saddled with tells us nothing that resonates with a tangible meaning. No flavour is indicated. Nothing is conveyed or hinted at. They were young. They were British. They were artists. Full stop.

But, and this is as annoying as it is paradoxical, the spectacular uselessness of the name, its complete lack of any descriptive component, turned out to be curiously apposite. No blanket in existence could ever have been large enough to throw over Damien Hirst, Gary Hume, Tracey Emin, Marc Quinn, Rachel Whiteread and the Chapman brothers. There was no glue. And this absence of coherence is what brings us, finally, to Gavin Turk, who is simultaneously the quintessential YBA and the least tangible of them all. 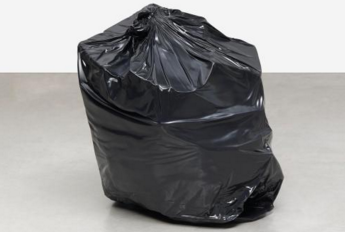 As the maker of some of the YBAs’ most notorious exhibits — the life-size waxwork of himself as Sid Vicious that stole the show at the 1997 Sensation exhibition; the cheeky blue plaque that says “Gavin Turk worked here” — you’d have thought he would be viewed as a leader of the pack. But he isn’t. He’s never been nominated for the Turner prize, let alone won it. I don’t recall ever having encountered his art at the Tate. And none of the big commercial galleries has regular displays of it. Turk is the big YBA with the tiny presence.

Why that should be, and what it says about his art, is made clearish by an engrossing, if irritating, display at the Newport Street Gallery, Damien Hirst’s fab, Stirling prize-winning gift to Vauxhall.

It’s irritating because it spends most of its length asking tricky questions, then not answering them. Called Who What When Where How and Why, the show is the third at the gallery, and by some way the most confusing. Containing works from all phases of Turk’s career, drawn from Hirst’s private collection, it is basically a retrospective. And, as Hirst seems to have nabbed the finest and most famous Turk pieces for himself, it’s a display that may never be bettered. Or is that worsened? Too many paradoxes? Reader, welcome to the world of Gavin Turk.

The opening room has as its highlight an enormous wall piece from 1996, Unoriginal Signature, which seems to feature a set of shapeless blobs, but is actually an anamorphic version of Turk’s own signature: a trick borrowed from Holbein. The blobs are also decorated with blue sponges that any reasonably experienced modern art lover will recognise immediately as a borrowing from Yves Klein, blue sponge-maker extraordinaire, who is currently the subject of his own survey at Tate Liverpool.

What we see here from the start, therefore, is an artist who defines himself by his relationship to other artists. It’s a line of investigation that continues in the next gallery, which has been left loftily empty except for the celebrated blue plaque with which Turk announced himself to the art world at his Royal College degree show of 1991. “Gavin Turk, Sculptor, worked here 1989-1991”, it insists cockily, as if he were already a somebody, when in truth he was just another art-school student pulling the familiar “nothing is something” trick that Klein invented in 1958 when he showed an empty room at the Iris Clert Gallery, in Paris, and 3,000 people showed up on the opening night to see it.

Having established him as a game player who relies on the antics of his predecessors for his meanings, the show becomes a parade of Turk’s favourite inspirations. Thus, a Pollock room features a set of pretend Pollocks created by dripping the words “Gavin Turk” backwards and forwards across the canvas. The pretend Pollocks are shown alongside black-and-white photos of him painting them in the exact manner of Jack the Dripper. The Warhol room, which comes next, is plastered with repetitive wallpaper of sneering lips, the backcloth to a row of screenprints of Turk as Sid Vicious as Warhol’s Elvis, alongside some car crashes that effortfully mimic the seriousness of Warhol’s car crashes.

All this is fun to look at, but creatively underwhelming. Turk might be asking loaded questions about the meaning of authenticity, the value of a signature, the creation of artistic identity, but his cover versions are never as good as the originals. And right there, in these inbred art-world forgeries, you have the reason why he has never gained a wider outside audience. There isn’t a sign outside the show saying Insiders Only, but had there been one, it wouldn’t have surprised me. One part of the art world is talking to another part. 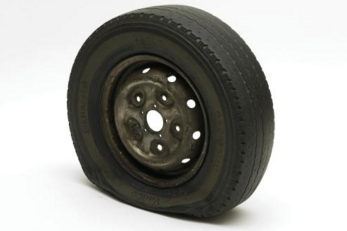 Fortunately, this pretend retrospective saves its best moments till last. In the final two rooms, something darker and more visceral occurs. The first step is taken by a set of waxworks in which Turk adopts various false identities and invades our space, creepily. Pop, the one with Sid Vicious firing a gun at us, is the most celebrated. But the most powerful is The Last Bum, a grubby down-and-out who seems to have wandered in off the street and who triggers a defensive recoil in you of the sort you feel when a swaying drunk looms out of a doorway. That’s the thing about waxworks. Your mind knows they’re not real, but your body thinks otherwise.

The waxworks are spiky and entertaining. But the most powerful work is collected in the final room, where Turk’s investigation of shifting values turns abruptly nihilistic. At the centre of the view is a huge black skip. Scattered around it are assorted bits of urban rubbish, some collected in black bin bags, the rest strewn casually across the floor. A half-eaten apple. A damp cardboard box. A takeaway coffee cup. The wrapping from a kebab. This rubbish looks as if it has blown in from the bins outside. In fact, all of it, the discarded lolly sticks, the punctured tyre, the empty bog roll, is made out of bronze, carefully and illusionistically painted to achieve maximum grubbiness.

The more you stare at the huge skip, the uglier and more brutal it becomes. Black, empty, incapable of glamour, Pimp, as it is called, says nothing concrete about the coarsening of modern life and the waste that this involves. But that, you intuit, is its subject. A show that moments earlier had been happily sniggering at art-world in-jokes begins suddenly to slap you about the face. Value? What value?