George Shaw reboots the Old Masters at the National Gallery 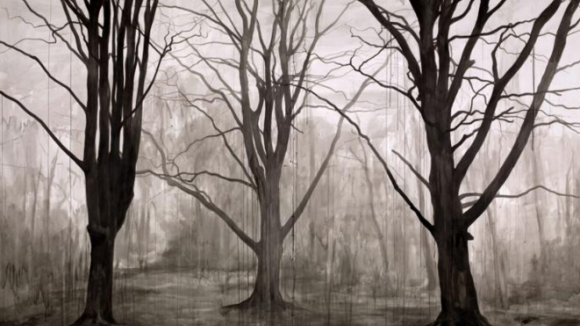 If ever there was an artist who did not appear qualified to be artist in residence at the National Gallery, it is George Shaw. Don’t get me wrong. I admire his work. When he was nominated for the Turner prize in 2011, he should probably have won. His Turner exhibition at Baltic, in Gateshead, was engrossing. But the Turner prize is one thing. The National Gallery is another.

Shaw is known for a single body of work: a set of obsessively detailed paintings of the decaying estate in Coventry on which he grew up. Produced with Humbrol enamels of the kind schoolboys use to paint their Airfix kits, the Coventry paintings of garages, bus stops and scruffy council lockups are the handiwork of a middle-aged man stuck in a shed with the memories of his youth. They have a power to them, yes, but it’s a creepy kind of power. It suits Coventry. But never in a million years would I have suspected that it might suit the National Gallery.

Someone in Trafalgar Square deserves a big pat on the back, therefore, for being less of an art snob than I, and for recognising that Shaw has the makings of a fascinating artist in residence. His “graduation” show, produced after a stay of two and a half years, is a riveting event. It casts light on Shaw. It casts light on Titian. It casts light on the National Gallery. It even casts light — of a murky, Coventry intensity — on what art is supposed to do. Add all that up and you have a profound achievement.

Artists in residence at the National Gallery are given not only a studio to work in, but a 24-hour key to the collection. They can pop in any time. It’s a privilege that invariably provokes two responses. The first is an attack of stage fright that stays the hand and makes them feel small. It can last months. Even years. Confronted by Velazquez, Leonardo, Manet, no contemporary painter can confidently imagine they belong in the same room.

The second reaction is a growing intimacy. As they look every day at the produce of their forebears, the artists in residence grow less intimidated. It happens to all of them. It happened to Peter Blake. It happened to Paula Rego. Last time round, it happened to the equally unexpected Michael Landy. Fear turns into closeness. Closeness turns into insight. Insight turns into cockiness. That’s the arc.

At the start of his show, My Back to Nature, Shaw is an overpromoted photorealist from Coventry, seeking to reach the bigness in his art that his new situation demands. The first exhibit is a set of drawings of himself, naked, acting out the 14 positions adopted by Christ in the Stations of the Cross. Hah!

Burly and closely cropped, Shaw, in the buff, is a wonky Jesus. The amateur dramatics he is forced to attempt to achieve the poses of Christ’s Passion have a meaty inelegance to them. There he is stumbling up Calvary. There he is being crucified. There he is being buried. It isn’t only Shaw who drops his kit here. So, too, does his drawing talent. Tiepolo he is not.

But fluency no longer means what it used to mean in art. Instead, these naked Christs have a bluntness about them, an honesty, that feels Hogarthian and British. With nothing else in the picture, just Shaw and his clunky miming, you find yourself wondering initially at his chutzpah. Then gradually recognising it as a display of courage.

And that’s the hesitation over. From now on, My Back to Nature becomes a fascinating meeting of two unstoppable forces. In the blue corner, we have the Old Masters, with their fluency, their history, their recurrently grand subject matter and their glorious otherworldly locations.

In the red corner, we have a bloke from Coventry who made Airfix kits in his bedroom, grew up on an estate where art was a foreign presence, was so good at drawing — by estate standards — that they made him picture all the Christs at Easter, and eventually found himself among the Old Masters at the National Gallery, and decided he would treat them as equals. Indeed, the final painting in the show is another self-portrait, this time in his denims, peeing against a tree in one of Titian’s sacred woods.

The celebrated mythologies that Titian painted for Philip II, illustrating Ovid’s Metamorphoses, are the main inspiration. Busy with naked nymphs and goddesses frolicking in leafy glades, they were the young Shaw’s favourite NG destination. What he does with them here is reimagine them as contemporary situations: to transport Titian to Coventry, as it were, and bring him down to earth. 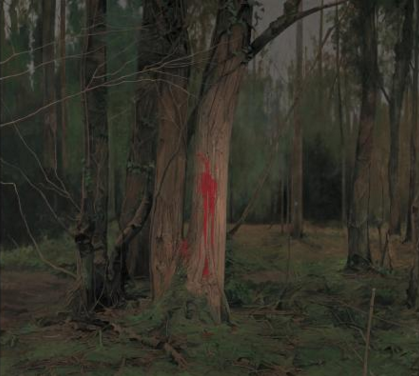 It’s a process repeated throughout the show. The scruffy copse becomes a universal territory for the bathetic re-enactment of gold-standard art history.

The Old Masters set things in their locations. Shaw sets them in his. In Poussin’s The Triumph of Pan, the nymphs and satyrs are drinking themselves senseless as they cavort in the woods. In Shaw’s reimagining, the party has finished and all that’s left by the tree stumps is a pile of beer cans and some empty wine bottles.

Trees dominate the display. What Shaw seems to have noticed is that an awful lot of art history’s greatest moments — mythologies, bathings, peeping-tom episodes — are set in the woods. It’s a cheeky insight. And it allows him to paint something he’s especially good at: gnarled and characterful oaks with a gnarled and human presence.

In his famous etching The Three Trees, Rembrandt imagined the Crucifixion as three battered oaks on a hill. This inspired religious equivalence is repeated by Shaw in a set of beautiful brown tree paintings that remind you also of Constable. And in the show’s biggest exhibit, a three-part recreation of Titian’s mythologies, a splash of cheap red paint on a tree trunk manages instantly to evoke the sense of a wound in a body: of Christ’s wounds as he hangs on the cross.

What we have here, then, is a set of pictures that are giving the Old Masters a contemporary reboot. The past is being yanked up to date. But — and this is what finally impresses most about the show — the new versions continue to sparkle with elusive meanings and magical pictorial possibilities. As all the best art does.

George Shaw: My Back to Nature, National Gallery, London WC2, until Oct 30