It’s a surprise on many levels. The most salient is that Koons is the most celebrated and glamorous artist on the planet just now, an international art star who shows at Versailles and the Centre Pompidou; Vauxhall, meanwhile, is a grubby and interstitial part of London without a past as far as modern art is concerned. There are places in the metropolis where you can imagine a Koons retrospective occurring. Vauxhall isn’t one of them.

Yet there it is, opposite a row of lock-up garages on a street that belongs in an episode of Minder, surrounded by council estates, occupying a workshop that was previously employed in the bang’n’shift manufacture of theatrical props. That was before Damien Hirst acquired it and turned it into the whitest and airiest suite of art spaces in London — the Newport Street Gallery.

If Koons is the biggest art celebrity on the planet, then Hirst is probably at No 2. Between them, they represent vast reserves of wealth, power and fame. Though not, perhaps, of credibility. Not in some quarters. When Hirst announced that he was opening a new gallery in Vauxhall with a collection of paintings by John Hoyland, the forgotten British abstractionist, the response was shockingly sniffy. I loved the show. Lots of others didn’t.

Not that Koons or Hirst look anything but delighted with themselves as they settle down on a black power settee for this pioneering joint interview. Dressed, as always, in a crisp two-piece suit — sans tie on this occasion to signal some informality — Koons looks like he should be selling apartments to heiresses on the Upper West Side, rather than explaining his art in Vauxhall. But then he always does. 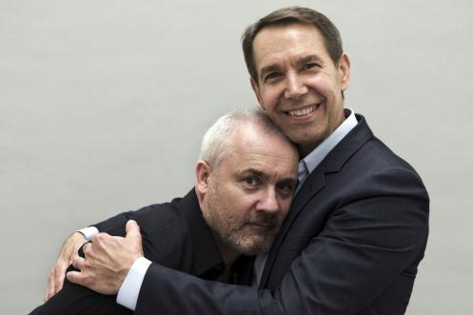 The first thing I want to know is when they met. Koons thinks it was in 1992 at Arolsen, a castle in Germany where both were invited to a group show. His contribution was a gigantic puppy made of live flowers, 43ft tall, which sat in the courtyard of the castle, oozing a floppy, droopy, canine bonhomie. It’s now the centrepiece of the Guggenheim Museum in Bilbao.

Hirst thinks that they may have met earlier, in New York, at a lunch organised by the madcap art dealer Jeffrey Deitch. But having had his memory jolted in the correct direction by the more precise presence on the black settee, he begins yappily remembering the meeting in the castle .

“Jeff was like a superstar to me. When I got there, I had this little room, and I made this installation called Room Closed Scissors Open Flesh Cut, with this projector showing bodies being cut. Next to Jeff’s Puppy, it was nothing. I was, like, ‘Holy shit. What have I done? I’ve gone to do a show with Jeff, but Jeff’s in the middle of the courtyard with this huge thing.’

Listening to them on tape, it’s more obvious who’s the boss here. With his squeaky Leeds accent and his incessant interruptions, Hirst is a schoolboy presence seeking constant attention, while Koons is stately, measured, teacherly. I find myself imagining a situation in which Hirst sticks up his hand and begs “Please, sir”, while Koons politely advises him to wait his turn.

This teacher-pupil relationship was exactly what was illustrated in the cunning magazine ads that Koons produced in 1988, and that Hirst cites as the first examples of his work he remembers seeing. Koons had a show at the Sonnabend Gallery, in New York, called Banality: a very Koons subject. The gallery asked him if he wanted a catalogue, but Koons said he’d rather have adverts placed in those art magazines that had been hostile to him. He would storyboard them and star in them. In the most contentious of these ads, for Artforum, headteacher Koons showed himself in front of a classroom of enthusiastic schoolchildren, writing “Banality as Saviour” on the blackboard.

For Art in America, he cast himself as Christ, surrounded by beautiful women tempting him with cake. For Flash Art, he showed himself hugging a pig. “I wanted to call myself a pig before anyone else could. So that people could only think more of me.” At which admission, they break out in unison in happy guffaws. 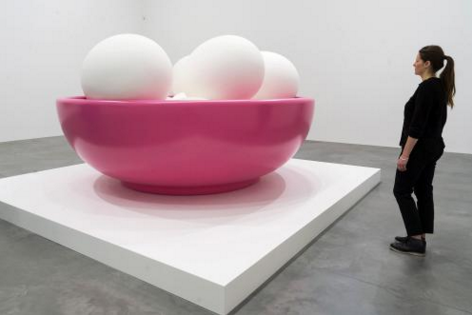 Hirst was still a student at the time. He remembers coming across the ads in the college library at Goldsmiths and being blown away by them. At more or less the same time, Charles Saatchi, who had recently opened his own private gallery in St John’s Wood, north London, put on a show of young artists from New York, including, and especially, Koons. As Hirst remembers it — and I can back him on this — the Saatchi show changed everything.

Inspired by New York Art Now, as Saatchi’s event was called, Hirst decided to mount his own exhibition of young London artists — his Goldsmiths contemporaries — and to house it in a converted warehouse by the river, at Surrey Docks. That show was called Freeze. And, as I can again vouch, it triggered a revolution. Freeze didn’t just launch the phenomenon of the YBAs. Freeze began the popularisation of contemporary art in Britain that would eventually result in Tate Modern.

No wonder, at the extra-private private view of Koons’s show later that night, that both Nicholas Serota, the emperor of the Tate, and the new director of Bankside, Frances Morris, could be seen inspecting the art a tad sheepishly. If Koons hadn’t inspired Hirst, and Hirst hadn’t changed the rules, Tate Modern would not be there now.

How come you’ve opened your own gallery, Damien? “When I did my show at the Tate,” he chuckles, remembering the display for the London Olympics that went on to be the best-attended solo exhibition in Tate Modern’s history, “they wouldn’t let me drink coffee in the gallery when I was installing. I said, ‘Are you joking? You can’t bring in a coffee?’ So I was, like, ‘I can’t wait till I’ve got my own.’”

The entertaining selection of art he has now installed in Vauxhall goes back to the beginning: the celebrated Hoovers with which Koons announced his arrival in the art world in 1980. Sitting pristinely in their glamorous Perspex cases, lit with A-list neon, the Hoovers were a new type of celebrity, ready-made for a new kind of celebrity America.

Where Warhol’s soup cans spoke of the noisily labelled choices available on the modern supermarket shelf, the Hoovers seemed to mark a shift in consumer taste from the loud and the quotidian to the silent and the fetishistic. Hirst tells me he keeps one in his bedroom, next to the bed. I am not in the slightest bit surprised. With their voluptuous retro styling and their purring presence, the Koons Hoovers are tangibly sexy. And, of course, they came in 50 shades of red. 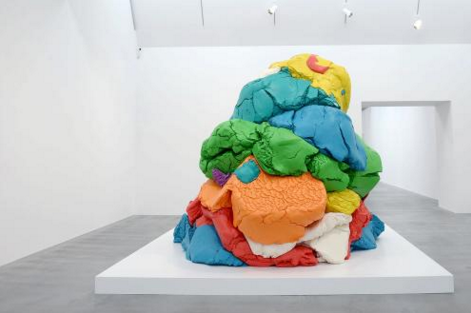 Everything in the show is from Hirst’s own collection, except for a light box borrowed from Koons himself and a painting called Boy with Pony, lent by one of the Gettys. Hirst began his buying spree 13 years ago, and now has, in Koons’s words, “one of the biggest collections of my work in the world”. It contains prime examples from all of the many Koons phases — six roomfuls of blue-chip art worth a mountain of Brixton pounds. Make that two mountains.

Koons collects, too. But from a different tranche. “As Damien’s been involved with contemporary work, I’ve been more involved with non-contemporary.” He owns pictures by Courbet, Manet, Picasso, Dali. Altogether, there are about 100 works in his collection.

“It’s my way of time travel. And another thing — I wanted to teach my children that when they think of art, they think of somebody other than their father. Instead of ‘Oh, that’s what my dad does’, they can look at art and think, ‘Oh, that’s Magritte.’ So they have lots more sense of opportunity in their own lives.

And with that, Koons and Hirst give each other a mental hug and head off downstairs, where the marvellous display they have created together awaits them, and you.