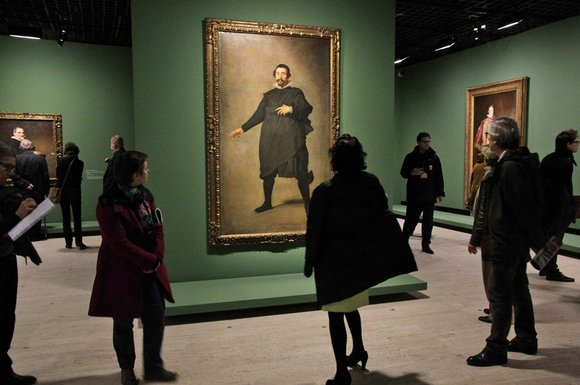 The fates are at it again. For reasons known only to themselves, these mad fiddlers in the affairs of men have decided we need a crash course in the achievements of the baroque age. How else to explain the arrival of Late Rembrandt at the National Gallery last autumn, followed immediately by Rubens at the Royal Academy and now by Velazquez, who has landed at the Grand Palais, in Paris, in a display that is being noisily billed as the largest ever foreign gathering of his pictures?

Of the baroque’s three giants, Velazquez has always had the most inviolate reputation. While Rembrandt was largely forgotten for 200 years after his death, and Rubens fell catastrophically out of favour, Velazquez has never had ups and downs. Recognised in his own lifetime (1599-1660) as a master of typically Spanish realism — if realism can be tall, dark and handsome, then that is what Spanish realism is — he has always been adored as the painter’s painter, fiercely accurate and implacably honest.

This is the opinion with which I, too, entered the Grand Palais’s hugely anticipated retrospective. As a career, Velazquez’s rise seems unusually free of setbacks. From the time he was apprenticed at the age of 12 to the notable Sevillian painter Francisco Pacheco, to the grand moment of his death in the court of the Spanish king, Philip IV, his progress has appeared effortlessly smooth.

The show begins beautifully in the 1610s with various images of the Virgin Mary, painted and carved in Seville when the spirit of realism was abroad in the city. Pacheco might have been a dull painter himself, but he was a good teacher, fully on message with the baroque’s driving ambition to make the world of the gods as tangible as the world of the mortals.

A lovely carved Mary by Alonso Cano shows how much delicacy could be brought to the task by the right Spanish hands. The great Sevillian sculptor Juan Martinez Montañes adds a more bulky, less ethereal model to the catwalk. But it is the first Velazquez masterpiece we see, painted when he was probably 19, that supersedes them all.

It shows Mary as the embodiment of the Immaculate Conception, hovering on the moon, surrounded by stars, “clothed in the sun”, as St John described her, and untouched by sin, yet still managing to look as fully human as if Velazquez had glimpsed her on the way to church that morning, with her mum. She even has the slight darkening above her upper lip typical of a Spanish teenager.

The next section, still set in Seville, features the famous bodegones, or tavern scenes, noted for the sizzling brilliance with which the young Velazquez captured the humble textures of the everyday kitchen, from the fried eggs to the water jugs. Unfortunately, the best examples, which all happen to be in Britain, have not been included. So a case is made for the bodegones in theory, but not really in practice.

After the success of his bodegones, he moved to Madrid, where he quickly found himself in the employment of the king, and where his chief task became supplying the court and its satellites with portraits. These have been scattered around the world and duly form the bulk of this event. The early ones, in particular, are powerful things.

Unlike, say, Flemish portraiture of the preceding age, Velazquez’s realism doesn’t depend on perfectly observed details. Instead, it confronts us with tangible psychological presences, faraway minds that burn like coals. In his royal likenesses, he had to pay too much official attention to the symbolism and the accoutrements, but in the stark heads and shoulders of the lesser court figures, he could go mano a manowith the face in front of him. With memorable results.

At about this point, however, the show starts to lose focus. Of the 100 or so Velazquez paintings that have survived into modern times, most of the best are kept at the Prado, in Madrid, where they form one of the great sights in art, all clustered around that particularly famous and important Velazquez achievement, the group portrait Las Meninas. With all this evidence concentrated in Madrid, any Velazquez show elsewhere has to make do with slimmer pickings. And, even though the Prado has lent generously to this event, it has kept back the biggest milestones.

To fill the gaps, the curators have included lots of things marked “studio of Velazquez”, as well as various examples by contemporary also-rans and a few hopeful attempts at reassignment. All of which makes for muddy storytelling. The real Velazquez is in there somewhere, but he’s surrounded by a lot of padding.

It’s a situation that isn’t helped by some ill-conceived presentation. The Rokeby Venus, from our own National Gallery, is a definite highlight, but the decision to place in front of it that notorious classical nude the Hermaphrodite — girl at the back, boy at the front — feels more like an act of desperation than of insight. The psychological focus of the Rokeby Venus is the great nude’s thoughts as she studies her haunting reflection in the mirror. The gimmicky Hermaphrodite is a sculptural joke, a classical one-liner with the psychological import of a seaside postcard. Putting it in front of the Rokeby Venus is an act of deep creative misunderstanding.

The show ahead goes wrong in various other ways. Seeing the great portrait of Innocent X that so famously inspired Francis Bacon to paint his screaming popes is unquestionably a superb moment. But the surrounding selection of other portrayals of Innocent and further popes by different hands serves to dilute Velazquez’s impact.

It’s a process that reaches a dismal conclusion in a room devoted entirely to his most loyal pupil, Juan Bautista Martinez del Mazo, who really isn’t worthy of this much attention. Thus, in its latter stages, the whole event seems to peter out.

Nothing new is being proposed for Velazquez. No different angles of understanding are attempted. The result is a show that unexpectedly diminishes him. Is the dark and smouldering realism of Velazquez an achievement of the same huge magnitude as Rembrandt’s volcanic human passion? Not on this evidence. Is his emotional range a match for Rubens’s unstoppable torrent of invention? Not on this evidence.

Also in Paris, the spectacular new Louis Vuitton Foundation, housed in an unfolding modernist onion designed by Frank Gehry, which opened last year on the edge of the Bois de Boulogne, has been flashing its chequebook and luring unimaginable treasures to Paris. A show called Keys to a Passion has somehow managed to persuade Matisse’s The Dance to come here from St Petersburg, then surrounded it with a range of modern art standouts.

The best version of Munch’s Scream is here. So are some of Picasso’s loveliest portrayals of Marie-Thérèse Walter. MoMA has lent its four most important Kandinskys. And in the show’s finest moment, a beautiful gathering of Mondrians and Maleviches exchanges delicate secrets of abstraction with a large, floaty Rothko. Money talks, I know, but in this case it also whispers delightfully.

Beyond proving how much power there is these days in handbags, the Vuitton show says nothing concrete about anything it has included. The exhibits seem perfectly matched, rather than purposefully included. But it’s all beautifully installed, nicely paced and, it has to be said, in the finest taste.