Henry VIII’s court has held our imagination since long before Wolf Hall. Nobody tells us more about its personalities than the painter Holbein

Should you ever be in New York, and have an interest in British history, then the place to visit is the Frick Collection, on the Upper East Side. The Frick has a delightfully varied selection of art that zips casually between the epochs. Rembrandt’s Polish Rider is here. And some of Degas’s most beautiful dancers. It has Vermeers. It has Velazquezes. But the room to head for if you’re a history lover is the one they call the Living Hall. That’s where the Holbeins are.

By the time he began collecting art, Henry Clay Frick — who made his money in coal and steel — could afford pretty much anything he wanted. For his Living Hall, the room in which he apparently spent most of his time, he got himself a Titian to hang at the back, and a Bellini to go next to it. Above the fireplace, he put a large El Greco of St Jerome. And on either side of the El Greco, he placed his two Holbeins.

Frick was a particularly perspicacious collector. He didn’t buy any old Holbeins. He bought two of the most significant faces in the whole of Holbein’s oeuvre. It’s almost as if he foresaw that one day a writer called Hilary Mantel would produce two books about Henry VIII, both of which would win the Booker prize; that the books, called Wolf Hall and Bring Up the Bodies, would be dramatised by the BBC; and that in the tussle over the truth that ensued, people would be keen as mustard to know who really was the hero of the piece, and who was the villain.

On the left of the fireplace is Sir Thomas More: the writer, statesman and Catholic martyr who refused to accept Henry’s new position as the supreme head of the English church. If you’ve seen A Man for All Seasons, in which the great Paul Scofield played More, you will know that in the old days, the days when I was at school, he was universally accepted as a heroic figure in British history. That is not how he is seen today.

On the right is Thomas Cromwell, Henry’s go-to man in the destruction of the monasteries. Until recently, Cromwell was the Dick Dastardly of the Tudor era, a notoriously nasty piece of work who organised the worst of the royal outrages. When I was at school, he was probably the vilest figure in British history.

That is not what he is in Mantel’s books. Today, in the novels, plays and BBC dramatisations, Cromwell has metamorphosed into a good guy. More, meanwhile, has become a bloodthirsty bigot and mad slayer of heretics.

Art, of course, has the great advantage over literature of actually being able to show you things. And Holbein had the advantage over Mantel of actually being there when all this was exploding. Indeed, the poor man was dropped right into the middle of it. He came to England from Basel in 1526, looking for opportunities and work. Instead, he found Henry VIII. 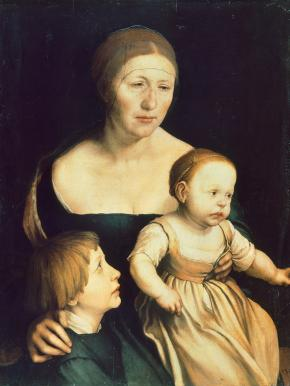 Perversely, the reason Holbein left Basel in the first place was to get away from religious strife. Before he arrived in England, he was known chiefly as a religious artist, famous for his haunting Christs and beautiful Madonnas. It’s a side of his art that surprised me when I encountered the best of it in the Kunstmuseum in Basel. In particular, the Dead Christ he painted for the base of a Basel altarpiece — as dead a Christ as you will ever encounter — struck me as a particularly un-British work of art: so pious, so Catholic.

There’s also an incredibly moving portrait of his wife and kids, whom he had to leave behind when he moved to London. Even here, I thought I sensed some unexpected religious stirrings. Mrs Holbein and her children have the air of a Madonna and child about them. They could sit happily above an altar. Holbein was actually born in Augsburg, in 1497, and, like all the German artists of his era, he would have had his work cut out deciding whether to plump for the Protestant side, or not. The fact that he chose to relocate to England in 1526, while Henry VIII was still imagined to be the great Defender of the (Catholic) Faith, suggests his own sympathies were, at the very least, divided.

Although he hadn’t actually painted many portraits before he arrived — the religious art had taken most of his energies — he was so talented, so educated and skilled, that he could turn his hand to anything. When I was making my film about him, we were able to examine closely some of his drawings for the jewellery he designed for Henry’s court. He designed the royal fireplaces, too. But it’s the portraits that transfix you.

Most bits of history feel far away and set firmly in the past. Not the bits Holbein painted. Among his earliest English pictures is a portrait of a woman in a white ermine cap, holding a squirrel. Breaking the law at the National Gallery, where she currently hangs, I pressed my face right up to her. She was so lifelike, I thought I could feel her breath on my cheek.

Of course, when it came to painting the king himself, Holbein was forced to operate under different rules. One thing you do not show in a portrait of Henry VIII is ye pores on ye royal face. To see what Holbein did for Henry, I recommend a quick visit to an exhibition currently running at the National Portrait Gallery, called The Real Tudors (until March 1, if your curiosity has been piqued).

It contains portraits of all the Tudor royals, including some early likenesses of  Henry that don’t look anything like him. Not till we get to Holbein do we encounter a Henry VIII who is extra-wide, who stands there like a Tudor gunslinger, staring down at us plebs. Now that’s what you call Henry VIII.

To invent this unforgettable royal presence, Holbein needed to tinker with the facts. The king was tall, but he wasn’t this tall. To lift him higher, Holbein added several extra inches of calf under the knees. According to the Venetian ambassador, who’d heard it from Anne Boleyn, Henry “lacked vigour” in the marriage bed. So Holbein endowed him with a particularly substantial codpiece that covered up any royal shortcomings in the heir-creating regions. As for his face, he gave it a massive frontality that feels immediately impressive. And that strange nose, which looks so walrus-like in the other portraits of Henry, doesn’t look walrus-like at all in Holbein’s portraits.

It’s a brilliant piece of image laundering. To my mind, there is no doubt whatsoever that one of the chief reasons we remain so obsessed with Henry VIII and his damn wives is because of the vivid impression of the age created for us by Holbein’s portraiture. When history feels as tangible as this, it doesn’t feel like history.

That is why I recommend a visit to the Living Hall at the Frick Collection, and a good gawp at Holbein’s portraits of More and Cromwell. Holbein was there. He knew them both. So what does he make of them?

Of More, he makes one of the most noble presences in the whole of British portraiture. Determined. Handsome. Resolute. With his velvet sleeves and his gold chain, More is a man of rank, but there’s something kindly about his face, too. And in the exact capturing of his five-o’clock shadow, Holbein has produced one of his finest records of the true textures of humanity.

On the other side of the fireplace, the new hero of Wolf Hall, Cromwell, has none of those qualities. Indeed, with his piggy eyes and his veal-like complexion, he is one of Holbein’s least appealing sitters. He’s shown at a desk, writing. A death warrant, perhaps. Or further instructions for the destruction of a monastery. As soon as I saw him, that famous observation by Hannah Arendt about the “banality of evil” flashed into my thoughts.

So, who to trust? Holbein, who was there? Or Hilary Mantel, who is a great writer, and a worthy winner of the Booker prize? Over to you.