Waldemar Januszczak has embraced the French artist at last 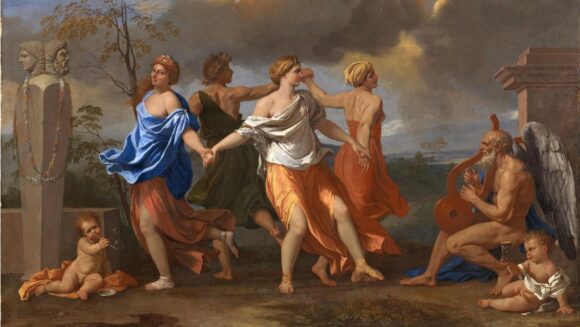 The French painter Nicolas Poussin (1594-1665) is a problematic presence in art. Nothing about him quite fits. He’s French, but most of his career was spent in Rome. His dates are baroque, but his style isn’t, at least not in an obvious way. You could hardly ask for a bigger contrast in artistic moods than the one you get when you put Poussin next to Rembrandt (1606-69).

It’s true as well that his art feels cool and erudite to the point of being off-putting. In most cases baroque art aims for the heart, but with Poussin it goes for the bit you need to be good at exams. At least it can feel that way.

These are the circumstances in which the National Gallery brings us Poussin and the Dance, a show with clear ambitions to make him more user-friendly. The wall texts describe him as “the most important French painter before Manet and the Impressionists”, and everything about this event, from its subject (uplifting) to its main sights (sex and drink) and its lighting (moody) are aimed at converting doubters.

It certainly worked on me. The pictures come from the early stages of his career, when he was not yet the austere landscapist who famously inspired Cézanne to “treat nature by the cylinder, the sphere, the cone”. The Poussin we see here is a lover of the classical world at its naughtiest, where beautiful nymphs dance in forest glades, Bacchus brings the wine, and the whole of Arcadia seems to resound to the giggle of rumpy-pumpy.

The first painting we see, The Realm of Flora, borrowed from Dresden, is a gorgeous, sunlit scene of Flora, the Roman goddess of flowers, surrounded by horticultural courtiers: Narcissus, with a narcissus; Hyacinth, scattering pale blue petals of hyacinths. With its joyous floral mood it’s a perfect tone setter.

The show ahead is excellently sparse. Britain has a lot of Poussin in its museums, and walking past long stretches of him can test your appetite. Here there are just a few paintings, some dazzling drawings and an occasional piece of classical sculpture, all arranged in plenty of space with the moody lighting singling out the fabulous moments.

Some of the imagery is specifically about dancing, but much of it isn’t. Rather, it’s about capturing figures in motion, and finding ways to convey that movement in paint. To get this movement right Poussin would make wax models of his figures and arrange them in different positions in his studio. The show keeps banging on about these wax figures and even includes a couple of recreations of them. Because they are imaginings rather than originals, I’m not sure how much is gained from including them.

But the same spaciousness that makes the wax models feel like space fillers brings something invaluable to the paintings. Let’s call it an air of sanctity: a sense of every picture being examined with special attention.

I’ve walked past A Bacchanalian Revel Before a Term at the National Gallery on countless occasions and never previously appreciated what a thunderously decadent picture it is. Look at the tottering cherubs on the left, guzzling wine as if it were mother’s milk. However many spheres or cylinders you dropped on the sleeping toddler passed out on the forest floor, you could never wake him from his drunken slumbers.

In 1635 Poussin was commissioned by the powerful Cardinal Richelieu — the bad guy in The Three Musketeers — to paint a series of scenes of love and fun in the glades of antiquity. The show reunites them for the first time.

In The Triumph of Bacchus, borrowed from Kansas, the debauchery unfolds from left to right in the manner of a Roman frieze. In the National’s own The Triumph of Pan it does so in a circular motion, as if the nymphs and satyrs are doing a conga around a maypole. The show explains this circular motion by hanging The Triumph of Panopposite the Borghese Vase, a giant marble pot, borrowed from the Louvre, carved in Rome in 1AD, and decorated all around its perimeter with beautifully sculpted dancing figures. Poussin, who adored the Borghese Vase, was attempting a painterly equivalent of a ring of sculpted dancers.

It’s an ambition that culminates in his greatest dance painting: A Dance to the Music of Time, from 1634. It usually hangs in the Wallace Collection, where it gets lost in the crowd. Here it has been treated to a room to itself. Just one painting, and some moody lighting. It’s a set-up that allows you to appreciate fully what a deep and resonant picture it is.

Some may know it already from the 12-novel sequence of the same title by Anthony Powell that was inspired by it. But it’s one of the downsides of literature that it goes on and on — while art works instantly and with brilliant encapsulation.

Instead of 12 volumes of verbose Powell, Poussin gives us a single scene, spare in mood, of four feminine dancers in a circle. They represent the journey of life from Poverty to Labour to Wealth and Pleasure, each identified with appropriate symbols. But because it’s a circular dance, one leads to the other, so Pleasure, at the end, holds the hand of Poverty, and it all begins again.

Everything you need to know about the journey of life, captured delicately and deeply in a single image.

Poussin and the Dance, National Gallery, London WC2, until Jan 2