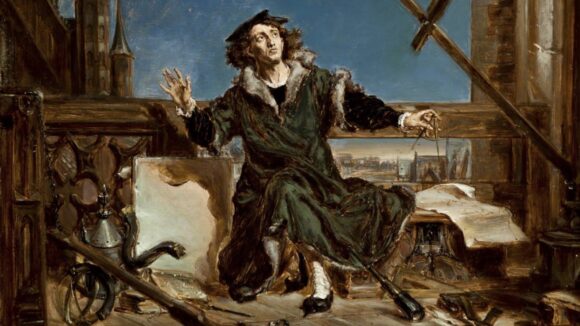 Only joking! As far as I know Brian has not yet visited Conversations with God at the National Gallery, nor feasted his eyes on the stirring portrait of Copernicus, the great Polish astronomer who discovered that the Earth goes around the sun, and not the other way round, that dominates the show. That pleasure awaits him.

It was painted by Jan Matejko (1838-93), Poland’s best known and most important artist. The Copernicus scene is not, however, typical of the art for which Matejko is known. More often his subject was war. In some of the largest paintings anyone has ever made, Matejko imagined the endless battles with neighbours that characterise Polish history. What’s the biggest picture in the Vatican? Matejko’s view of the Battle of Vienna, where the invading Ottomans were defeated by Jan Sobieski, the Polish king, in 1683.

To understand what’s going on in Matejko’s fretful psycho-verse, examine the map that looms up on the right of this small, punchy and subfusc display, the first exhibition by a Polish artist at the National Gallery. The map shows Europe in Matejko’s lifetime. You’ll recognise its basic shapes. There’s Scandinavia. There’s Russia. There’s the Baltic Sea. What’s missing is Poland. For 123 years, from the final land grab by its neighbours in 1795 to the Treaty of Versailles in 1919, there was no Poland. An entire country slipped down the back of the settee and disappeared

When a state has gone, but a nation remains, what are the forces that hold it together? In Poland’s case there was, above all, religion. Unlike the Russians, who took one chunk of land, and the Prussians, who took another, the Poles were fiercely Catholic.

Then there was language. Hardly a week goes by without someone somewhere telling me that my name would make a fabulous score in Scrabble.

Finally, there was art. And especially Matejko.

I repeat this potted national history because it helps to make sense of what is occurring in the rousing portrayal of Copernicus, making his momentous astronomic discovery, that commands this event. It isn’t quite a one-picture show — there are self-portraits, sketches, scientific instruments — but it’s not far short.

Copernicus (1473-1543) — in Polish, Mikolaj Kopernik — is a figure of Shakespearean dimensions. Everyone’s heard of him. His achievements are globally admired and cemented into the national sense of self. Matejko shows him at night, the astronomer’s playtime, atop a tower in Frombork, whose gothic cathedral looms up behind him to pinpoint the location, but also to bring God into the equation.

Scattered about him are his scientific instruments and books. The clunky wooden contraption on the right is a triquetrum, a medieval instrument for measuring the altitude of heavenly bodies. In the preparatory study for the picture, also in the show, Matejko places a telescope by Copernicus’s feet, not having realised that they were still to be invented. Three and a half centuries after the event — the painting was made in 1873 — everything here had to be researched, calculated, imagined.

Copernicus himself, arms outstretched in theatrical attention, is young, handsome, with flowing locks. If they made a TV series they would get in Aidan Turner to play him: the Poldark Astronomer. Where my imagination sees an ageing Renaissance scholar, bent double with piety and genius, Matejko sees a Romantic hero, locked in celestial communication, spotlit by a shaft of divine light. (In fact the only reliable portrait there is of Copernicus has him looking more like Matejko’s version than mine!)

Divine illumination is the key to the picture. At first it’s possible to mistake it for especially bright moonlight, but then you track up to Copernicus’s face and follow his gaze. That’s not the moon he’s looking at. 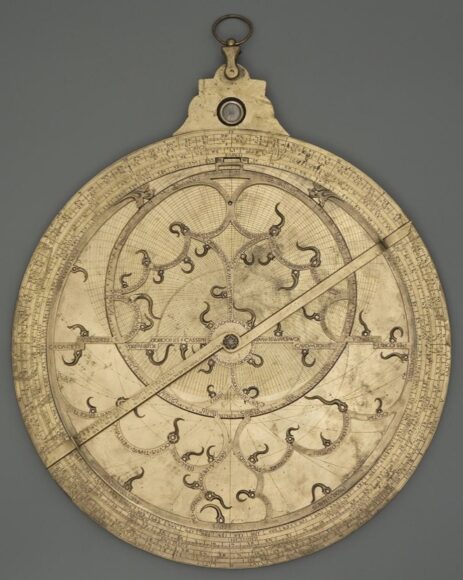 The illumination falls most brightly on the diagram on his right, the famous Copernican view of the solar system, with the sun at the centre and the planets circling it. Also in the show is a rare copy of De revolutionibus orbium coelestium, the posthumous text in which Copernicus’s discovery was officially announced. It’s open on the same diagram.

By calling their show Conversations with God, the organisers of this stimulating event go out of their way to underline the religious meaning of Matejko’s dramatic portrayal. After its publication, De revolutionibus was deemed heretical by flat-Earth Catholic authorities, who insisted on a vision of the universe that had Earth at its centre. But by the time Matejko painted this picture that battle had long since passed. Matejko is bringing God back into the argument for different and bigger reasons.

Remember the map. By showing Copernicus’s history-changing discovery to have been God’s handiwork and not just the great astronomer’s — see how the shaft of golden light pushes him against the parapet and blows back his Aidan Turner hair — the picture is explicitly casting God on the side of Poland in its 19th-century battle for independence. No wonder the Poles love Matejko so heartily.

Another reason to go to the National Gallery is to see the “new” Poussin on show in the central galleries. The Triumph of Silenus — drunken satyr, naked, surrounded by more drunken satyrs, plus drunken nymphs, also naked, frolicking in a woodland glade — was long thought to be a copy, but recent technical examinations have revealed it to be the original.

As always with Poussin, what ought to feel like violent frenzy manages, initially, to appear soft, calm and pink. Only when you look carefully do you see the horrors.