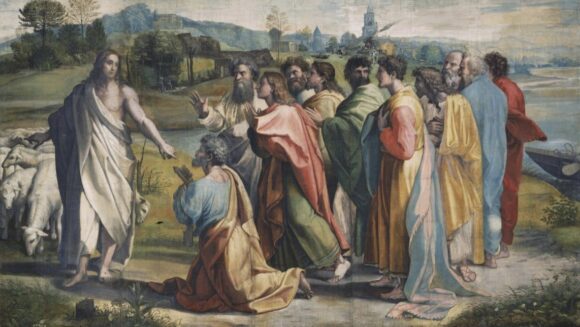 A parlour game that might be fun to play is: pick the work of art in Britain that would fetch the most money if it ever came up for auction. I know it’s vulgar. Humour me. I’m playing a bigger game.

Given what has happened recently with Leonardo da Vinci, and especially the $450 million spent by the crown prince of Saudi Arabia on the putative Salvator Mundi, there are those who would immediately nominate the Madonna of the Rocks at the National Gallery, or some of the dazzling Leonardo drawings at Windsor Castle. Lots of noughts would certainly be needed to get those.

More modern participants, eyeing the ridiculous sums being lavished on contemporary art by the international nouveau riche, might prefer to throw Jeff Koons into the mix. If Tate Modern decided to sell off the roomful of Koons given to it by Anthony d’Offay it would probably make enough to fund two or three more extensions at Bankside. 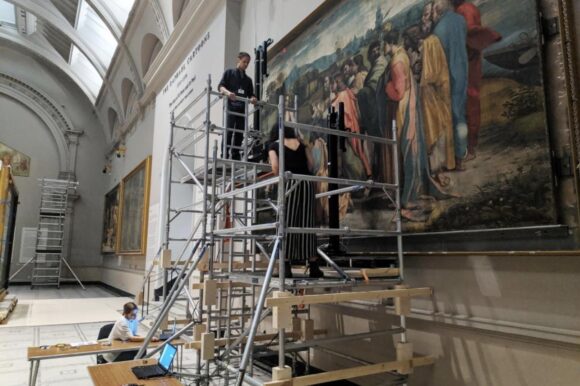 These are good shouts. However, if I were playing the game I would place my chips on the Raphael Cartoons at the V&A. This huge set of seven religious paintings on paper — cartoni in Italian — were Raphael’s designs for a set of tapestries commissioned by Pope Leo X to complete the decoration of the Sistine Chapel in Rome. Yes, that Sistine Chapel. So that’s already a big tick next to them. Here’s the rest of my thinking.

Leonardo and Koons tickle the tastes of the modern world, no arguments there. But compared with the Raphael Cartoons, their cultural importance is circumscribed. They would definitely appeal as trophies to a certain kind of multi-moneyed collector, but in terms of their broader impact on art, and on the history of the nation, they are no match for the cartoni.

Consider what the Raphaels have going for them. First, they are masterpieces from the very epicentre of the High Renaissance by the era’s rarest grand master. Soon after Michelangelo was unleashed on the ceiling of the Sistine Chapel, Raphael, at floor level, was unleashed on the Cartoons. Unfortunately, he died at the age of 37 and simply didn’t live long enough to produce as much as Leonardo or Michelangelo. Short of hacking out his great papal frescoes from the walls of the Vatican Stanzas, there are no more important works by him in existence.

The Cartoons also have a special and particularly resonant meaning for British history. Henry VIII was an early admirer of the tapestries woven from these great designs, and had a set made specially for Hampton Court. In 1623 Charles I — supposedly on the advice of Rubens! — acquired the seven cartoni for the new tapestry factory he had set up in the hope of ushering in an English Renaissance. So the Raphaels played a sizeable role in cementing his reputation as a royal spendthrift who was micturating away the nation’s wealth on foreign gewgaws: Catholic gewgaws at that!

On their own, they were not responsible for the beheading of the king by Cromwell and co, but they definitely did their bit.

All this would already be enough to tempt a daftly endollared modern billionaire to bid up, up, up were they to appear at Christie’s. But I still doubt they would outgross a good Leonardo were it not for a fresh development.

Since 1865, when Queen Victoria loaned them to the museum in memory of her beloved Albert, the Cartoons have struggled to be properly displayed at the V&A. However, a floor-to-ceiling rehang — new walls, new colours, new mood, new lighting — timed to coincide with the reopening of our museums on May 17, has transformed their presence. We always knew they were important. What was harder to appreciate, until now, is how jaw-droppingly beautiful they are.

Why the parlour game? Because it’s the bluntest way I could think of to make their preciousness clear. These might be the most valuable artworks in the country, but they are also among the most underrated and underappreciated. How many times have you trekked to the V&A to see them? How aware have you been of their significance? How high are they on your bucket list?

One thing that is certain is that the previous display severely hampered their impact. Since 1950 the Cartoons have hung in a grand central space that the V&A called the Raphael Court. Tall and domed, more or less the same dimensions as the Sistine Chapel itself, it’s an imposing space and ought to have worked better than it has. The big mistake here was to paint the walls an indeterminate magnolia that sucked the life out of the paintings and flattened them.

Because they were done on paper, so they could be transported more easily to the tapestry workshops in Belgium where the best Renaissance tapestries were woven, the Cartoons are softly and subtly coloured. The new colour scheme, featuring a rich background of inky blue, has them popping out from the walls and endows them with a brighter, nobler presence.

Another mistake was the lighting, which was disastrous. Pictures as big as this, framed behind glass, always create problems with reflections. However fiercely you stared at the old Cartoons, pretty much all you could see was yourself and the things behind you. Having filmed in the gallery on a couple of occasions, and thrown every flap, screen and light-stack at the problem, I can confirm that the Cartoons were basically unviewable. Not any more.

Technical developments in gallery lighting have allowed the problem to be mostly solved without changing the glass. Instead, what they’ve done is to position new lights high up in the gallery dome at angles that do not create reflections below.

Of the seven wall-sized masterpieces that make up the Raphael Cartoons, six are now perfectly viewable. Only the most luminous of them, the especially beautiful scene of Christ and the apostles fishing on the Sea of Galilee, still has a problem. A finished tapestry of the scene, hanging on the wall opposite as an example, requires different lighting, and looms up distractingly in the reflections.

While the redesign of the room has sorted out most of the display problems, another of the Cartoons’ issues — the notorious complexity of the imagery — has had a Nasa spaceship’s worth of photographic science thrown at it, and big chunks of the internet. If you go to the V&A website and click on Raphael Cartoons you will now be able to investigate the history and meaning of the whole set with a dizzying array of virtual gadgetry.

Push one button and you’ll see every inch of every work in the highest possible detail. Push another and you’ll penetrate to the paper on which they were painted, with every crease and tear left by 500 years of art history made suddenly visible. When the museum reopens all this will be available inside the gallery on your smart phone. Eventually, they will hand out special iPads.

For me, of greater value than this Perseverance Rover-level of gallery high-tech are the detailed guides to the stories and religious meanings of Raphael’s imagery that have also appeared online. For reasons that I have never fully understood, there is something especially confusing about this particular arrangement of religious scenes. Every time I memorise the sequence, I manage quickly to forget it again.

The view of the Sea of Galilee, the Miraculous Draught of Fishes, is straightforward enough: Christ is telling his beloved apostle Peter that he will be “a fisher of men”, and the beautifully observed scenes of nature around the boat amplify that meaning.

The problem is the other six paintings. Convoluted stories such as the Death of Ananias or the Sacrifice of Lystra were rarely treated in Renaissance art (who’s Ananias, where’s Lystra?). The scholarly Sistine thinkers who decided on the sequence for Raphael had dense theological agendas to attend to. Even an experienced art-watcher such as me has their work cut out comprehending them. The difference now is that we want to.