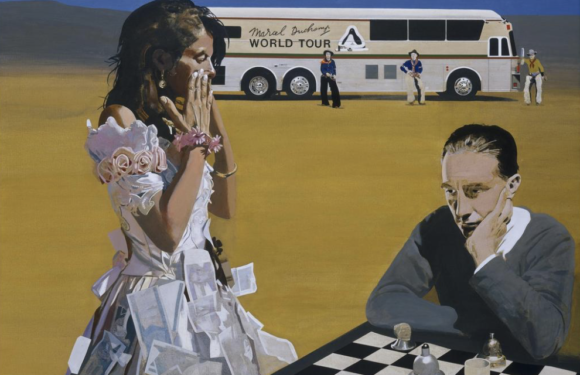 Chess. If you poured a bucket of Drambuie down me and span me 1,000 times, I still could not have imagined that the focus of the latest hit on Netflix, the main topic in the chat rooms of WhatsApp this week, would be chess.

It’s the fault of the second lockdown. With all this imagination time to kill, huge spaces have opened up for stories that do not involve the search for a serial killer or the baking of cakes. Into these huge spaces has strode the gloriously named Anya Taylor-Joy and her inch-perfect transformation into Beth Harmon, chess prodigy, Librium addict and beater-up of dour Russians. “Go Beth!”, we scream at the telly as The Queen’s Gambit reaches its endgame. “Make America great again.” 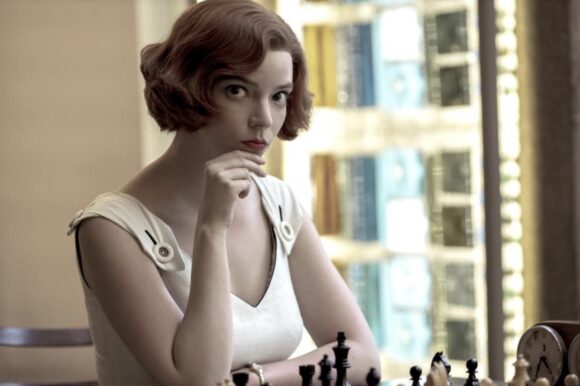 So, yes, the success of the Netflix series is a surprise. What has not surprised me is the hypnotic role played by chess itself in this bewitchment. Chess sneaks inside your head and stays. It’s a skilled trespasser. First it’s over here, then it’s over there. How do I know this? Because I’m an art critic. And if you critique art, you encounter chess.

Here’s an example. In 2007 the celebrated pop artist Peter Blake, the man who designed the Sgt Pepper’s cover for the Beatles, had a retrospective at Tate Liverpool. His Beatles cover was there. All his most famous images were there. But then what should pop up at the end but a new painting of Marcel Duchamp playing chess with Tracey Emin? Behind them was a bus with “Marcel Duchamp World Tour” written on its side. And Tracey’s dress was covered with banknotes. “Eh?” I thought at the time. “Eh?” I’m still thinking now.

Duchamp was a chess addict. We’ll be coming to him later. But Tracey Emin? With banknotes stuck to her wedding dress? What’s that about? Reader, it’s about lesson one in matters of chess: beware of surprises. You’re expecting a Sicilian Opening. But along comes the Queen’s Gambit.

Let’s start with the pieces you play with. Among the British Museum’s most treasured possessions are the Lewis Chessmen. Carved out of walrus ivory in the 12th century, these bellicose little angries were discovered on the Hebridean island of Lewis in 1831, and quickly disrupted conventional British thinking about the progress of civilisation.

Because they were carved out of walrus tusks, the Lewis Chessmen were rounded and cramped in their postures: charged with pent-up energy. They stood for human figures — bishops, kings, foot soldiers — but because they’d been released from the dental set-up of a walrus they were unable to adopt conventional forms. Instead they became something magical and sculptural.

And if we leap forward a millennium to the heyday of Henry Moore, could Britain’s greatest sculptor have imagined us as he did — with tiny rounded heads and curvy swaddled bodies — without the sculptural example of the sacrificial pawn? I say no. Outside of religion and kingship, chess was the only territory that allowed for a fresh sculptural imagining of the human figure. 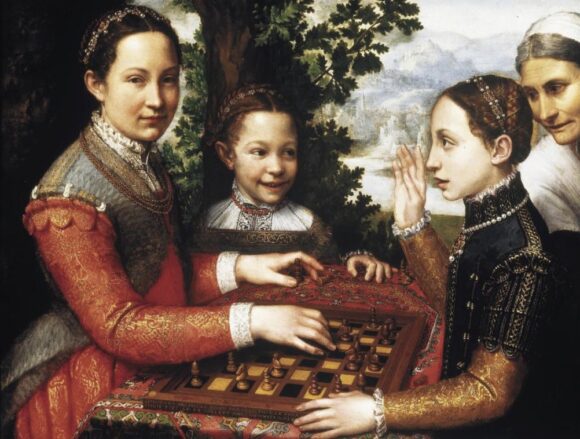 By the time the Lewis Chessmen were made, the game was ancient. Think how many fired-up human imaginations had had a go at sculpting kings, queens, rooks and knights since the invention of chess, in India, in about AD600. From India it travelled to Persia. From Persia to Venice. From Venice it toured Europe. By the 15th century, everyone in the Renaissance seemed to be playing.

The earliest painting showing fun around the board that I know was painted in Siena in 1475 by Liberale da Verona. It hangs in the Metropolitan in New York and is the front of a wedding chest, or cassone. This instructive marriage gift shows a man and a woman enjoying a chess battle before an entourage of Renaissance hangers-on. He’s winning. Rc3 should seal it for him. So she has grabbed his arm and looks wistfully into the distance, as if to say: “Don’t take me.”

You may have seen Liberale da Verona featured in that episode of Morse where he and Lewis (a telling chess coincidence!) go off to Italy to capture a murderer who’s forging valuable antique manuscripts between kills. In Renaissance Europe chess was considered to be a suitable game for women, because, unlike cards, it sharpened the mind in noble ways. Scenes of men playing women are relatively common. Beth Harmon would have fitted right in.

At the other end of the Renaissance from Liberale, in 1555 a chess game is also the focus of a delightful family portrait by the pioneering Sofonisba Anguissola. Half a century before Artemisia, Sofonisba was already doing it for the sisters. And she was doing it with chess.

She came from a family of seven, all brought up to be humanists by their progressive father. In her most famous painting she shows two of her sisters playing and a third, the youngest, looking on. We know who they are because their names are written on the side of the chessboard. Lucia, white, is playing Minerva, black, while little Europa looks on. Lucia is about to move Qd6 for checkmate. So Minerva throws up her hand to concede. As always with chess pictures, it all feels itchily symbolic.

Unlike the Renaissance, the Enlightenment wasn’t very enlightened in chess. Most 18th-century chess paintings feature two brooding blokes hunched darkly over a move. The 19th century wasn’t much interested either, unless the picture was set in Arabia and the players were sultry femmes fatales. But then along came the 20th century, with its senseless wars and its mad territorial scrambling, and chess was everywhere.

Why did the surrealists love it so obviously? If you look into the background of a typical piece of lowly off-the-shelf surrealism you are almost certain to find a chessboard somewhere in there. Even a picture as fully and brilliantly surreal as Dalí’s Metamorphosis of Narcissus cannot resist having black and white squares on its horizon. 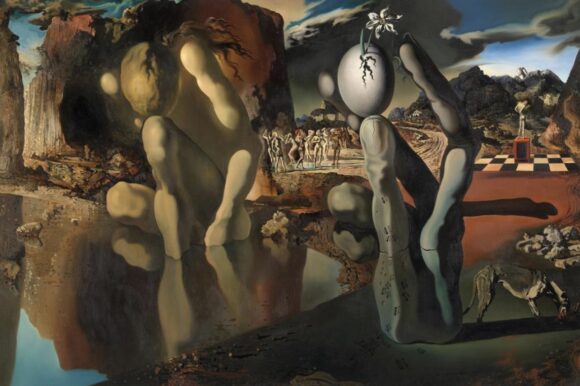 The inventive surrealist painter Dorothea Tanning seemed always to be doing something new. Except in her dullest picture: a giant close-up of a chessboard called Endgame. And don’t get me started on Giorgio de Chirico. All his people are mannequins. And all his mannequins are chessy.

Leading the way in this surreal worship of chess was Marcel Duchamp. As a young man with a mathsy brain he developed a fondness for the game that became obsessive. Several of his earliest paintings are cubistic views of people playing chess. Even his most notorious work, the upturned urinal from 1917 called Fountain, has something of the pawn about its simplified outlines.

In 1923 Duchamp announced that he was giving up art to concentrate on chess. “While not all artists are chess players,” he philosophised, “all chess players are artists.” It turned out to be another convoluted gambit from the father of conceptual art. Instead of making art in the open, he began making it secretly.

In 1963 a pushy American art groupie called Eve Babitz challenged him to a game while she was naked and he wasn’t. It became one of the most celebrated of all Duchampian images. And this was what Peter Blake was referring to when he painted Duchamp playing chess with Tracey Emin.

In those days Tracey was also famous for getting her kit off. On this occasion she’s wearing a dress pinned with money, a folk tradition learnt from her Turkish dad. At Turkish weddings guests would pin money to the bride’s dress. Sometimes, she explained poignantly, “the dress was worth more money than the money”.

For Blake the painting was intended as a comment on Duchamp’s huge international influence. Even Brit Art was a stop on Marcel Duchamp’s Magical Mystery Tour! But underlying all that, deeper still into the mystery of the board, is the bigger chess truth that everything is a war. Between black and white. Between men and women. Between royals and commoners. In The Queen’s Gambit it’s also a war between the past and future.

So come on Beth. We need you to win.