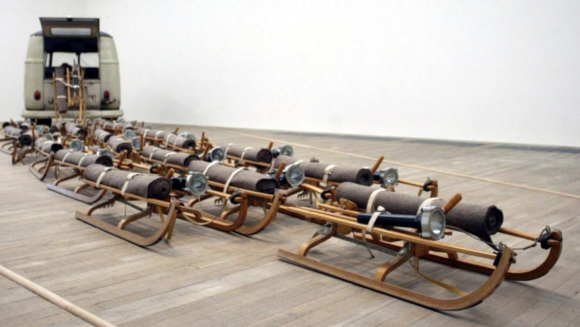 My mother used to bang on about the war. It was the chief reason I didn’t go home as often as I should have done. I knew all the stories. How the Russians came. The journey to Siberia. The cattle truck. The wolves. How she ate tree bark in the labour camp because she was so hungry. On and on she remembered, while I sneaked out of the back door and left her to it. I was young and her stories were a sack of sand dropped on my spirit.

Years later, though, when I became an art critic, my second-hand familiarity with the moods and textures of the Second World War turned out to be surprisingly useful. At the time the biggest star in art’s firmament was Joseph Beuys, the charismatic German multitasker whose sculptures, installations and sense-defying “aktions” were the talk of the gallery world. Beuys was everywhere. The king of art. And everything he did was soaked with the spirit of the Second World War.

The story doing the rounds about him was that during the war he had been a Stuka pilot whose plane was shot down over Crimea. He could and should have died. But a tribe of nomadic Tartars saved him. To keep him alive in the bitter cold they rubbed animal fat into his skin and wrapped him in felt. That was why so many of his best-known sculptures featured so much fat and felt.

The work I’m focusing on here, the installation with the camper van and the trail of sledges, has fat and felt packed carefully onto every slider, plus a torch. It’s called The Pack and it’s on show at the museum in Kassel. For me it’s Beuys’s meisterwerk. And I found myself thinking about it this week for strange and unbidden reasons.

The past few days have been the bleakest I’ve had in the lockdown. Nothing terrible has happened. In most respects it’s been the same as all the other weeks. This time, though, it felt hopeless. The riots. The iconoclasm. People chanting “En-ger-land” in front of boxed-up statues of Winston Churchill. This was the week the lockdown got to me.

To escape I did what you always do; I turned on the telly. But before I could get to the safety of Springwatch, what should pop up on the news but a VW camper van. Grubby white. With pale yellow skirting. It belonged to the new suspect in the Madeleine McCann case. Did anyone remember seeing this Volkswagen in Praia da Luz in 2007?

It wasn’t only the battered camper that felt Beuysian. There was something as well about the face that came with it. Blond. Blue-eyed. Gaunt in the German fashion; a skin stretched over a skull. They wouldn’t give his full name, and called him “Christian B”. “Christian” is a loaded name on anyone. On this guy it felt positively satanic.

Thus a dark shift in the news cycle forced me into doing something I had not done for decades — thinking about Joseph Beuys. Weirdly, powerfully and very surprisingly I felt a sudden connection with his mood. Beuys died in 1986. He was a zombie from another epoch. But the week had ploughed me up. And that damn camper van of his planted itself in my thoughts. And stayed there.

The thing to notice about it is that the sledges are pouring out. Escaping. They have arrived somewhere, and now they are setting off to do whatever it is they are here to do. When I first saw the sculpture I thought the sledges were following the camper. They look, initially, like a comet trail, or the trace of a shooting star. But no. They’re leaving. The runners are pointed firmly in our direction. The pack is heading our way.

Each sledge has been neatly arranged with Beuys’s legendary survival materials. A roll of felt. A wedge of fat. And a big handheld torch of the kind you can still buy in old-fashioned hardware stores. Silver. No nonsense. A long handle filled with batteries. Everything on every sledge has been carefully tied down with leather straps, as if these were standard-issue kits from a quartermaster store.

The sledges, I read, came from East Germany, as it was at the time. They are sports sledges, for tobogganing, but the East Germans didn’t go in for flash or frills, so there are none. As for the battered white camper, so redolent of self-sufficiency and travel, it belonged to Beuys’s dealer in Berlin. He used it to transport pictures and sculptures around the city. His camper was his workhorse. But Beuys took a shine to it, and that was that.

Once you have noticed the direction the sledges are heading in, it’s worth noting that the first one is packed differently from the rest. The torch is on the left, the felt is on the right. So he’s the leader of the pack. The head wolf. And what you thought, initially, was a warm and hippieish work about being on the road and buddying up with friendly Tartars in a yurt begins to turn darker.

The way that the last sledge tumbles out of the tailgate of the camper is another giveaway. If you have been to France when the hunting season is on, you’ll recognise that doggy scrambling. The pack has arrived. The tailgate is opened. And out they all come. The more you stare at it, the more sinister it becomes.

So what does it really mean? Nothing straightforward, that’s for sure. Beuys didn’t do straightforward. I went to see one of his lectures once, at the Victoria and Albert Museum in London, and for two hours he stood before us, chalk in hand, drawing strange diagrams on a school blackboard, covering it with equations, symbols and arrows. It was weirdly gripping. But I came out of the lecture without a single solid memory of what I had been told. Nichts.

Beuys said of his Kassel installation: “This is an emergency object: an invasion by the pack. In a state of emergency, the Volkswagen bus is of limited usefulness, and more direct and primitive means must be taken to ensure survival.” Hmm.

What is the “state of emergency”? Is it a war? A pandemic? Are the sledges pouring out of the tailgate coming to save us, or to invade us? There’s something militaristic about their precise packing. But a sense, as well, of a field hospital on the move. From some angles it feels good. From other angles it feels bad.

Where’s the remote? I desperately need to watch some Springwatch.