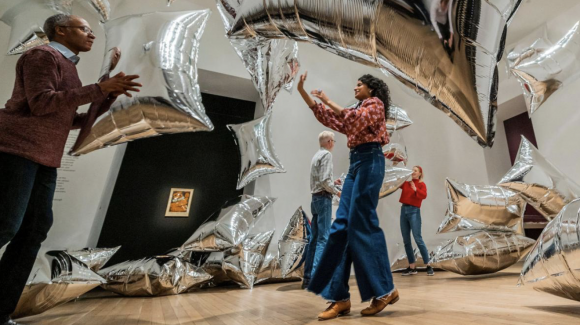 Breaking news: Andy Warhol did not say that one day everybody would be famous for 15 minutes. The line appeared in a catalogue for a show in Sweden and was probably written by the curator Pontus Hulten, although the photographer Nat Finkelstein has also claimed the credit. Finkelstein was taking a portrait of Warhol when passers-by kept trying to push themselves into the shot. Everybody wants to be famous these days, complained Andy, to which Finkelstein replied: “Yeah, for about 15 minutes.” Or so he says.

The Swedish catalogue, open on the 15-minute page, is on show at Tate Modern’s weird Warhol retrospective, where it provides one of the few bits of solidity at an event that drifts through Andy’s career like a fairground balloon filled with helium. You never know what’s coming next. Every room is a surprise. And there’s never a firm sense of an organised mind having planned the journey.

Not that that is necessarily a bad thing. Better shows than this one — lots of them — have tried and failed to find a secure path though the thin and fidgety achievements of Andy Warhol. The master of blank provided few solids in his career. His genius — and I use the word consciously — was in giving people so little that they had to fill in the gaps themselves. Warhol invented audience participation. Loving Andy is nearly always a case of loving yourself. No wonder he’s so popular. 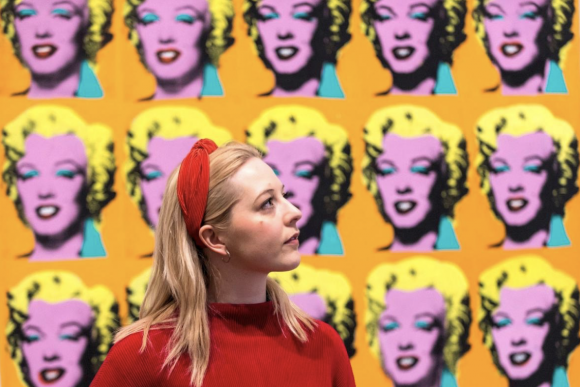 In some circles, though, especially American ones, thisis enough of an achievement to warrant the placing of him at the summit of 20th-century art. Blake Gopnik’s recent biography of Warhol, at 976 pages long, has no reservations about including him among the giants: Picasso, Matisse, Duchamp. Elsewhere on the art spectrum, however, these things are still to be settled. Plenty of work remains to be done on deciding the real weight and worth of Warhol’s achievements. I had hoped the present show would help. Instead, this jerky driftospective flits from bit of Warhol to bit of Warhol like someone zapping through the channels on late-night TV.

It’s all a bit tinpot. The opening vestibule has four things happening in it, none of which gets past the scratching-the-surface stage. First, we learn from a photocopy of a ship’s passenger list and some wonky photos that Andrej Warhola was the son of immigrants arrived in America from Slovakia. Then a gallery of drawings of handsome boys and their bits highlights his homosexuality. Then a sexy self-portrait of him in shades introduces the quasi-religious notion of the “icon”. Then one of his films playing in an alcove, the one about John Giorno sleeping, foregrounds the importance of his film-making. As an agenda, it could hardly be more all over the place.

This sense of Warhol being too big a subject for the show to handle is exhibition-long. One decision that obviously has been taken is to minimise his pop art, which gets just one gallery to itself in which to present his progress from Campbell’s Soup cans to Coca-Cola bottles to Marilyn Monroe and Marlon Brando, with some Elvis thrown in, to Brillo Boxes, Flowers, car crashes, race riots and jet disasters. Talk about a whistle-stop tour.

Lumping them in one gallery like this has the effect of flattening out the entire achievement and making it feel interchangeable. I can see why Tate Modern would wish to direct the Warhol story away from his familiar pop art, beyond the soup cans and the Marilyns, on to pastures new, but squeezing everything into one tiny display is a crude solution.

Anyway, that’s what they’ve done, and the only good thing about it is that it forces the rest of the event to deliver a different Warhol storyline from the one we usually get. Having dealt so curtly with his pop art, the exhibition gives itself the space to poke about in his other niches. Chief among these is his involvement in film, fame and music: the multimedia Andy.

In typical Tate style, it’s done mostly with approximations. The silver room is a gallery plastered with silver foil that tries to evoke the famous interior of the Factory, Warhol’s studio headquarters in New York, which was wallpapered in kitchen foil by Billy Name. Playing in the Tate’s silver room is a nice selection of Screen Tests, the short Warhol films in which sitters were asked to do nothing while the camera watched them intently. Bob Dylan, Marcel Duchamp, Edie Sedgwick sit and stare. Susan Sontag, in shades, draws sexily on a cigarette, as if auditioning for the Mrs Robinson role in The Graduate. The poet Ann Buchanan refuses to blink, until her eyes fill with water. We’re watching reality TV being invented, so it’s a shame that it’s happening in a fake silver space more suited to Madame Tussauds than a Warhol show. 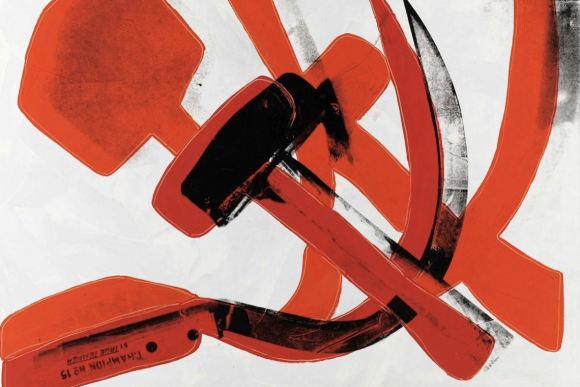 That said, since its inception Tate Modern has tried to camouflage the gaps in its collection by turning the act of gallery going into a theme park experience. Audience participation has always been part of a policy of distraction, and this event puts plenty of energy into continuing that tradition. Just as pop art gets a room to itself, so too does the tiny moment from Warhol’s 1960s career where he filled a New York gallery with silver balloons blown up with helium. Silver Clouds, as the show was titled, has been recreated here so you and your kids can kick silver balloons in the air and watch your reflection squiggle and float. I won’t lie. It’s good fun. But shouldn’t we be going to Alton Towers to do this?

Equally phoney, but much weightier, is the recreation of one of Warhol’s Exploding Plastic Inevitable happenings, where the Velvet Underground would drone away happily while various passing Factory superstars jigged and pranced, and homemade revolving mirror balls threw psychedelic patterns on the wall. I don’t know who came up with the present approximation — it obviously wasn’t Warhol — but they have done a brilliant job of it. The combination of throbbing Velvet Underground bootleg music and blurry close-ups of Nico and Edie Sedgwick is transportational and soon had me throwing shapes.

From here on, though, the show gets well and truly lost. The Tate policy of treating each succeeding gallery as a mini-show suits some artists, but not Warhol. He was too prolific. Too much has had to be left out, with entire strata of his career presented so swiftly that the precis feels insulting.

His “communist” phase is reduced to three pictures: a Mao, a Hammer and Sickle, and a Skull. The Piss Paintings, made by urinating on canvases coated with metallic paint, are represented by a single example, which hasn’t a snowball’s chance in hell of looking meaningful.

In contrast, Warhol’s messy paintings of drag queens, splashed out in huge numbers in the 1970s, get a generous showing, accompanied by a typically woke Tate apology pointing out that Andy “documented a community he was not part of, with the subjects having little agency in how they were depicted or where the works would be shown”. Er, I don’t suppose Marilyn or Elvis or Liz or Jackie had much agency either.

So there are some good moments. But they are outnumbered by the feeble ones. The effort to promote Warhol the multimedia pioneer above Warhol the pop artist is done too flimsily. It all feels a bit hit and hope. And what’s really missing is what we really need: a deep and proper assessment of Warhol’s achievements, mounted with wisdom, from a helpful distance.