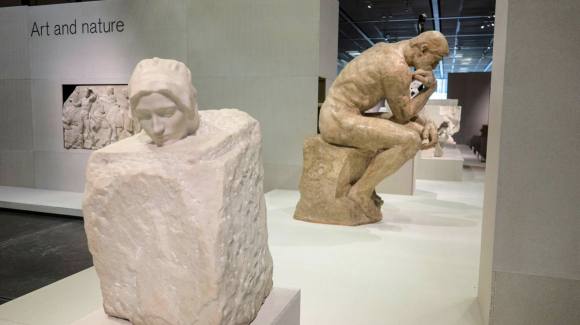 Rodin is currently in favour. I point it out from the off because the Rodin-o-meter swings so easily from yay to nay, and because, even when he was alive, his reputation fluctuated so vigorously. After his death in 1917, you would have thought things might have settled down, and a consensus might quickly have been reached on his true worth. But the opposite happened. First his reputation plummeted like a dropped barbell. Then it spent the rest of the 20th century ascending Olympus on a route better suited to snakes and ladders. Only in the past few decades has he been fully accepted again as a trailblazer of modern sculpture and a bona fide giant of art.

There are two big problems with Rodin. One concerns his “authenticity”, and the second his “melodrama”. His authenticity has always exercised his critics. What is a genuine Rodin and what is not? To pick a quick example from the itchy Rodin show that has opened at the British Museum: early in the journey we encounter a large white version of The Kiss. It’s the most familiar display of enraptured snogging in art. You know it. Everyone knows it.

But the version at the British Museum, borrowed from the Rodin Museum in Paris, is a plaster cast of a marble version. And neither the plaster nor the marble was made by Rodin. Rodin didn’t carve. He produced models in clay, which were then given to stone carvers, who sized them up. As a result of these factory methods, not only did he grow indecently rich, he opened the door to every half-competent forger in Europe and fatally corrupted his own legacy. 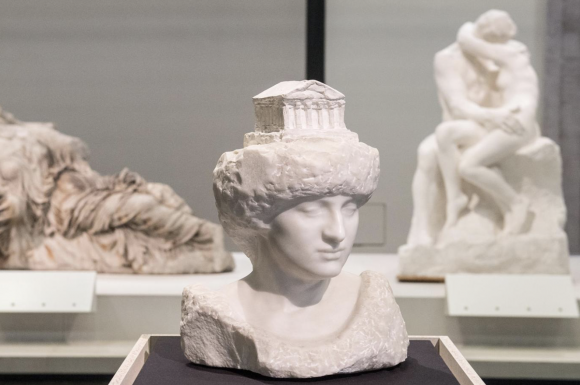 Paradoxically, these production methods are now seen as pioneering. Today, authenticity is understood as an aesthetic quality to be played with. Indeed, the British Museum devotes one of its more intriguing alcoves to Rodin’s “assemblages”: the small sculptures he made by combining bits of mass-produced legs, arms and torsos from a stockpile in his studio. It’s pretty much the same process the Chapman brothers use to produce their Hell vitrines.

Although issues of authenticity buzz around this show like a cloud of midges on a Scottish holiday, its central purpose is to examine Rodin’s debt to the art of ancient Greece. He never actually went to Greece. But on a visit to London in 1881, he encountered the Elgin marbles at the British Museum, and their influence on him was immediate and profound.

The organisers of the current event have duly created a giant catwalk on which the Elgin marbles and Rodin’s reworkings of them are displayed in tandem. You walk down one side, then you walk up the other, with the excellent surprise at the far end of a big window opening out onto the streets of London. Looming up in the brightness of this unexpected window is the giant bronze of the Burghers of Calais, stooped and huddled, and offering unarguable proof of his occasional genius as a public sculptor. 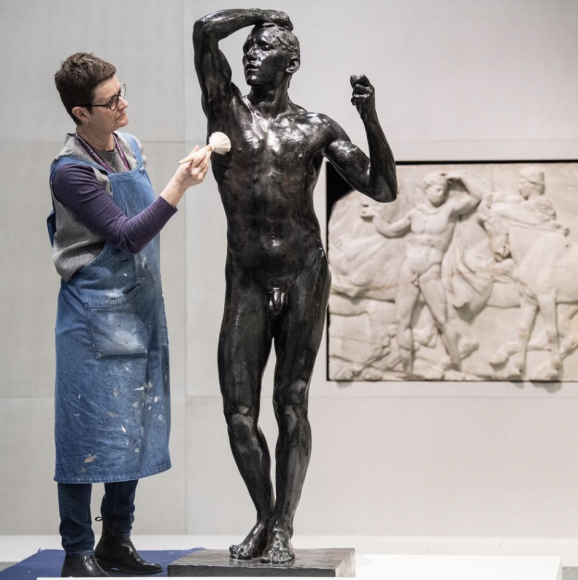 Unfortunately, the brilliance of the Burghers is infrequently repeated. The melodrama that is Rodin’s second abiding fault pitches much of his output on a volcanic level. If the show had a soundtrack, it would consist entirely of rending, howls, screams and scratchings. Most of his best-known works are here. And what a dysfunctional sculptural family they form.

His most conspicuous borrowing from the Elgin marbles was a taste for sculptural fragments. Where a Greek statue might be headless because time had broken it, Rodin preferred them that way, and would reassemble his favourite bits in new combinations. For his famous Walking Man — a figure with no head or arms that strides purposefully towards us — he combined an armless torso in his stockpile with a pair of walking legs previously used in his John the Baptist. The result is a headless chicken of a sculpture, doomed to strut for eternity. And because it has been assembled from two different bits, when you walk round to the back, you see that the joining of the legs to the torso is really messy. Rodin stole lots of things from ancient Greek sculpture, but never its grace or its sense of perfection.

Some of the Frankenstein creations are spectacularly ugly. The Centauress, which gets my vote as his worst Greek-inspired sculpture, has the body and neck of a horse, topped off by a ludicrous female head and arms. Iris, Messenger of the Gods, is a headless female who uses her one good arm to grab her leg and contort herself into a position that offers a crudely detailed view of her sex.

Thus, this beautifully presented event is packed with horrid artistic moments. Much of what is on show strikes a torturous note, and Rodin’s unstoppable ambition to load his sculpture with big meanings results in a huge tonnage of melodrama. Sometimes, as with the giant plaster version of The Thinker included here, the heroic new scale to which he inflates his figures adds some genuine power. More frequently, it makes his art preposterous.

So it is left to the Parthenon marbles to provide most of the best moments. For the first time in living memory, we get to see them in a completely new context. How fresh and vital they appear as a result, and how comprehensively they win the encounters with their copyist. 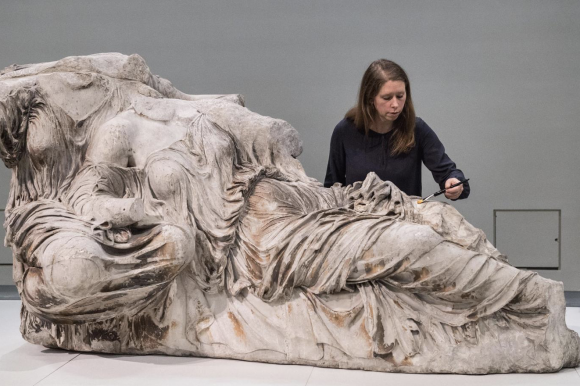 Even here, however, there are issues of authenticity to confront. The marbles Rodin would have seen on his visits to the BM are not the ones we see now. In the 1930s, they were “cleaned” by Lord Duveen and his workmen, who scraped them down with wire brushes and carborundum, the second hardest material known to man at the time, in a disastrous effort to make them appear whiter.

To witness the effect of this scandalous cleaning, take a close look at the celebrated horse’s head from the Parthenon pediment, on display here at a particularly intimate height. Why does it look as if a millimetre of its true surface has been savagely scraped off? Because a millimetre of its true surface was savagely scraped off by Duveen and his vandals.

We now know that the Parthenon sculptures were originally painted, and that colour was always a feature of Greek art. But Rodin hated the idea of a coloured Parthenon as much as Duveen did. His sculptures remained resolutely white because he worshipped a purity that was never actually there.

Thus, the show strides confidently and classily through a response to the past that is mightily confused and thoroughly misleading. The Kiss, which greets us at the entrance, is unclear in its materials and uncertain of its message, but the gleaming whiteness of its plaster manufactures a note of false purity that successfully exaggerates the illusion of an eternal embrace. It’s worth noting that Rodin was never as keen on his ecstatic super-snog as everyone else. “A large sculpted knick-knack” is how he dismissed it, with uncharacteristic perspicacity.

Rodin and the Art of Ancient Greece, British Museum, London WC1, until July 29