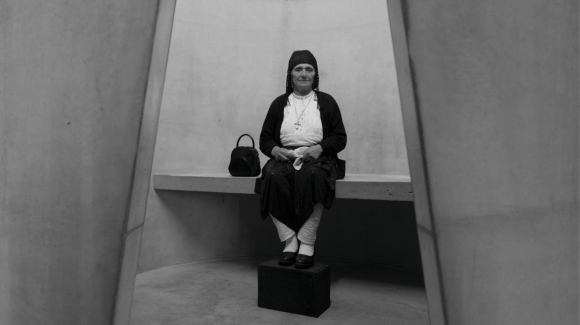 The gods are a grisly bunch. Last week, they fixed it for the American performance artist Taryn Simon to open her powerful new work about the transportation of grief across the international no man’s land of humanity on exactly the day — Tuesday — that the Windrush generation discovered how it ended up geopolitically homeless. When Theresa May stumbled through her grim apology for the treatment of Caribbean migrants by her Home Office, it was as if she, too, was playing a part in Simon’s dark script. (Breaking news: US performance artist Taryn Simon has mounted the most ambitious international happening of all time and persuaded the British PM to take a leading role.)

In truth, An Occupation of Loss, as Simon’s eerie event is formally entitled, is only partially about international identities and the perils of belonging. More profoundly, it’s about the act of mourning: how we as a species respond to death, and how the emotions that rise up at times of passing can be turned into something tangible and solid. So solid, it can be packed into a suitcase and successfully transported across every international boundary. 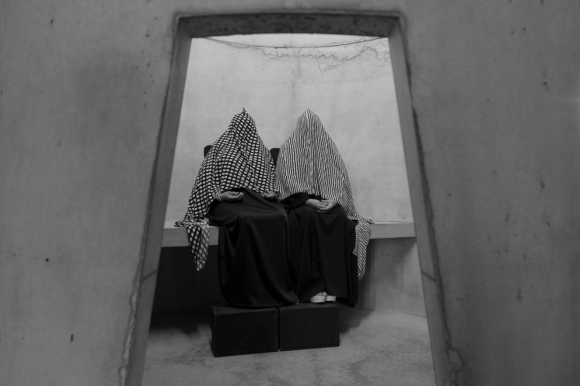 Here’s what actually happens. You turn up at an address in Islington and discover a construction site that has been neatly boarded up: a new building, sitting there, unfinished. At exactly quarter to the hour, a door opens in the perimeter and you are ushered into a huge concrete vestibule that’s surprisingly circular, like an indoor bullring. From outside, you would never have suspected this was on the inside.

After some moments of communal puzzlement, shared with your fellow attendees, exactly on the hour a black-clad attendant appears and — having requested your silence for the duration of the piece — leads you down, down, down, into the bowels of the building. If the bullring upstairs was a surprise, the concrete arena at which you eventually arrive is positively shocking. It’s enormous. About the size of a Bond villain’s headquarters. Indeed, if you imagine what a Bond villain’s subterranean headquarters might look like once the bailiffs have stripped it back to bare concrete, you would have a pretty accurate idea of the scale of Simon’s futuristic Hades. Beneath the everyday surfaces of London, all this is going on.

A drum sounds. And at the bottom of the pit into which you have descended, a spooky line of international characters begins slowly filing through, like Noah’s animals disembarking from the ark: two men in black, one of whom has an accordion; two Buddhists in white; two black women with red shawls; a pair of shadowy figures in head-to-toe mourning robes; two women wrapped in keffiyehs. There’s something heavily ancient about their presence. And we urbanistas and metrosexuals in the audience are made immediately to feel paper-thin and new. At least, that’s what it did to me.

In the centre of the arena, soaring up to the roof, is a pair of neon columns between which the mysterious cast must march. As they do so, they momentarily disappear. It’s a trick of the light: a bit of technical magic achieved by the neon. But it creates a ghostly sense of transportation, as if we are stepping from one dimension into another.

That’s when the singing begins. And the wailing. And the thumping. And the sobbing. Tracking down the haunting noises to their source, you find groups of the mysterious visitors enacting strange and uncheery rituals in the concrete niches surrounding the underground pit. One pair beat their legs and wail in time to their own sobbing. Another, the Buddhists, sing their laments through electronic speakers. A third crouch down on a concrete shelf and beat their heads against the walls. 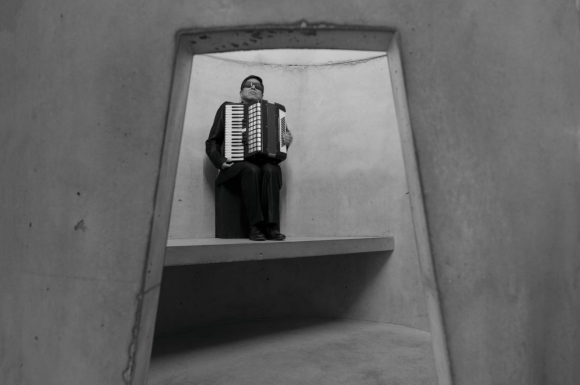 They turn out to be professional mourners, gathered from faraway corners of the globe — China, Azerbaijan, Ghana — and imported into this unlikely London setting to unleash their professional misery on us. In their homelands, their job is to add appropriate levels of despair to the passings for which they have been hired. Here, in the bowels of trendy London, their intense sobbing and wailing appears to critique the surrounding modernity, and accuse it of superficiality.

The laments continue for 30 minutes. Then, as abruptly as they started, they cease. A profound silence descends upon the concrete Hades into which we urban Orpheuses have been lured. As we leave, an elegant white package is thrust into our hands. It contains the visa applications made by the mourners Simon has brought over for her happening. It’s all there. The cost of the visas; the time and place of the interviews.

Thus the curt language of bureaucracy crushes the profound moods into which we have been plunged, like a steel toecap stamping on a butterfly.

Does anyone know the postcode for Downing Street? I’d like to send the PM a ticket to this event.

An Occupation of Loss, Islington Green, London N1, until Apr 28