Rarely have I been as disappointed by a blockbuster as I was by All Too Human, at Tate Britain. For months, the Tate press machine has been noisily preparing us for this show’s arrival. Bacon. Freud. Freud by Bacon. The pre-emptive hype has been world-class. And it certainly deserves a better payoff than the confusing display of boneheaded curation that has now arrived at Millbank.

There are many problems, and we’ll deal with all of them. But the most fundamental is that this show isn’t actually about anything. Various bits of it say various things, and some of the art is magnificent. But the journey makes no sense. As an arrangement of paintings, All Too Human leads from nowhere to nowhere.

The title doffs a cap to The Human Clay, an important exhibition mounted at the Hayward Gallery in 1976 by the painter Ron Kitaj. That show was important because it fought on the side of figuration, in a battle raging at the time between figuration and abstraction. By insisting that figurative painting could be as progressive as abstraction, Kitaj was making a rousing declaration. And by lumping together his artists — Lucian Freud, Francis Bacon, himself — in a group called the School of London, Kitaj added a second layer of glue to the fixings: a geographic layer.

Nothing as tangible happens here. Most of the same artists are involved, but why they are included is never evident. I defy anyone to grasp the agenda being set by the opening display. The four artists on show — Walter Sickert, Chaim Soutine, Stanley Spencer, David Bomberg — are so unconnected, they have surely never previously found themselves in the same room. I thought it might be something to do with all their names beginning with S, but Bomberg sinks that theory.

Soutine, in particular, is a mystery. I adore his work. The recent show of his portraits at the Courtauld Gallery was perhaps my show of the year. But he lived and worked in Paris; has no connection with London; never came here, as far as I know. So what is he doing sharing the arrow duties at Tate Britain with Spencer and Sickert?

To make it worse, the three Soutines are weak examples of his work and immediately question the eye of the show’s curators, while their subjects — a portrait, a landscape, a shopfront — point in three different directions. Yes, the two Spencers — a matching pair of portraits of Patricia Preece, dressed and undressed, in the style of Goya’s Maja — are sizzlers. And the Sickert nudes in murderous situations are effectively dark and troubling. But in this mystifying arrangement, the diamonds are as pointless as the rhinestones.

Having smuggled Soutine into a show about British painting, the curators muddy the water some more by surrounding a Giacometti sculpture in the next room with early paintings by Bacon. There are no other sculptures in the event. Only this anorexic Giacometti bronze. Giacometti was Swiss. He never worked in Britain. What is this, pin the tail on the donkey? 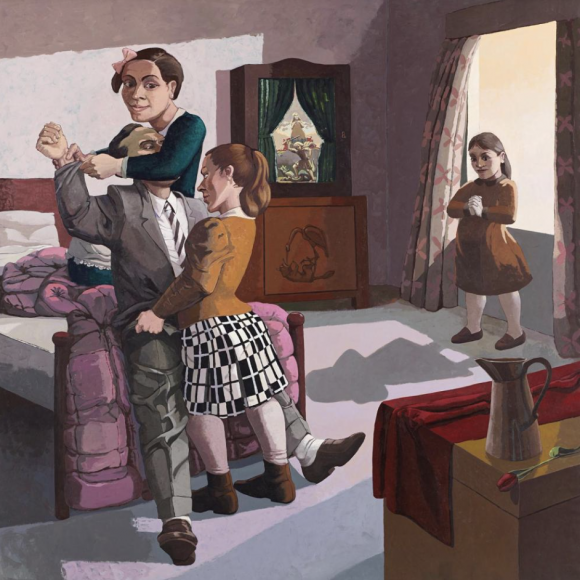 The Bacons are not overly impressive, either. In the first phases of his career, he was as hit and miss as Soutine; while the witterings in the wall captions about isolation and existentialism belong on a packet of Rice Krispies, so lacking are they in adult understanding and depth.

So the show ahead could be about brushstrokes? About the human figure? About landscapes? About London? Or Paris? Or Geneva? Who knows?

Of course, the confusing arrangement, with each room functioning as a separate book, rather than a chapter in a story, is a Tate speciality. As a display strategy, it imagines the audience to be a bunch of dimwits who need constant distraction and cannot follow a coherent storyline. Over at Tate Modern, especially in the big biographical surveys, it usually works because the unfolding life of the subject supplies a strong underlying narrative. But these wonky theme shows at Tate Britain really are all over the place.

What should loom up suddenly here but a room filled with bad paintings by FN Souza, a stiff and mannered portrayer of nude women and saints, whose tone and imagery clash massively with everything else on the journey? Souza, who was from Bombay, and who deserves some respect for being the first Indian artist to emerge after independence, was as fond of showy black lines and pointy angles as Bernard Buffet. And what huge artistic presumption to sign every picture halfway up with such a big, look-at-me signature.

Souza is here for political reasons, a token Indian presence cut out of one storyline and pasted into another. By including his landscapes and his religious art, the display shoves us ever further off a meaningful exhibition path.

William Coldstream, who was hugely influential from the 1950s to the 1970s when professor of fine art at the Slade, treated the human figure with mathematical precision. Its angles were worked out on a detailed pictorial graph, an approach more suited to designing Ikea packaging, you would have thought. 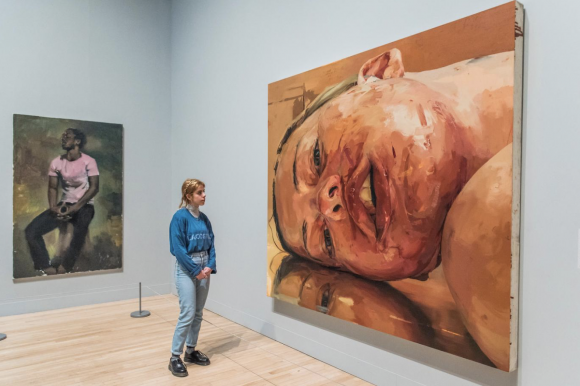 His pupil Euan Uglow went even lower down this flatpack route. Ludicrously, the portrait included here of a glum girl called Georgia, sitting blankly on a blank settee, took five years to finish. Five years of life-strangling calculation wasted on what looks, finally, like the cover of a Mills & Boon novel.

Who should pop up in the same dull room as Coldstream and Uglow but Lucian Freud, with a pair of charged portrayals of his first wife, Kitty? In the best of them, she sits on a sofa with a breast hanging out of her dressing gown, its floppiness rhyming outrageously with the face of the white bull terrier on her lap: pup to pup. Typical Freud. Wicked, but brilliant.

There are good galleries devoted to Frank Auerbach and Leon Kossoff — although each is represented as well by diarrhoea-coloured plasterings from their slap-it-on-thick phase, looking like something you’d find on a pavement in Mornington Crescent on Sunday morning. I like messy bits of expressionism as much as the next man, but these paint ploughings from the 1960s are spectacularly ugly.

Bacon’s late work has its own moment. It is better than his early moment, though why the show’s only photographer, John Deakin, has been forced into the same display is another curatorial mystery.

A central gallery filled with later Freuds is the show’s high spot. Looking down from a lofty viewpoint, the later Freud seems to be painting specimens, rather than people. There’s a heartless tone to his work. But in pictures such as the fat lady sleeping in front of the lion carpet, or the two women lying naked on a cheap iron bed, the heartlessness of his vision charges the air with rare psychological electricity.

Freud is riveting. A couple of galleries later, so is Paula Rego, with her Portuguese Punch and Judy art, in which costumed men and women act out comic battles of the sexes that are deadly serious.

We finish on a room full of good paintings — by Celia Paul, Jenny Saville, Cecily Brown, Lynette Yiadom-Boakye — in which this boneheaded event, with a final mad lurch, suddenly becomes an investigation of evening-class issues in a section entitled Identity, Self and Representation.

Tate curators, ditch the books of critical theory, enrol yourselves on a decent art-history course and get yourselves educated.

All Too Human, Tate Britain, London SW1, until Aug 27