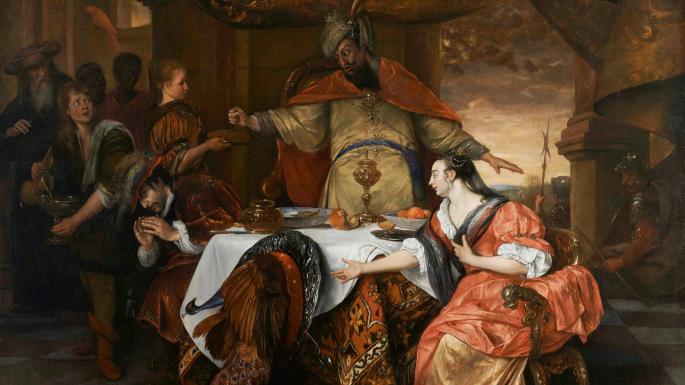 Dutch art of the 17th century — the so-called golden age of Dutch art — is not always easy to admire. There is so much of it, in such similar cabinet sizes, that it forms an indigestible mass in the many museums in which it is collected: a mass you are tempted to hurry past.

Of course, the Rembrandts and the Vermeers stand out. Hals stands out. But it took me many walk-pasts and years of museum guilt before I learnt to stop before every Ter Borch to admire the drapery; before every van Schrieck to sense the religious darkness of his forest floors; before every Steen for a giggle and an education.

Actually, that is unfair. Jan Steen (1626-79) has always been among the more noticeable presences in the Dutch mass. His cheeky humour and lively details have usually prompted a smile. Humour is a rare quality in art. Many think it disqualifies you from greatness. I disagree. But it certainly is true that the Dutch golden age produced a large number of humorists, and that their happy mockery generally ranks among the era’s smaller achievements. 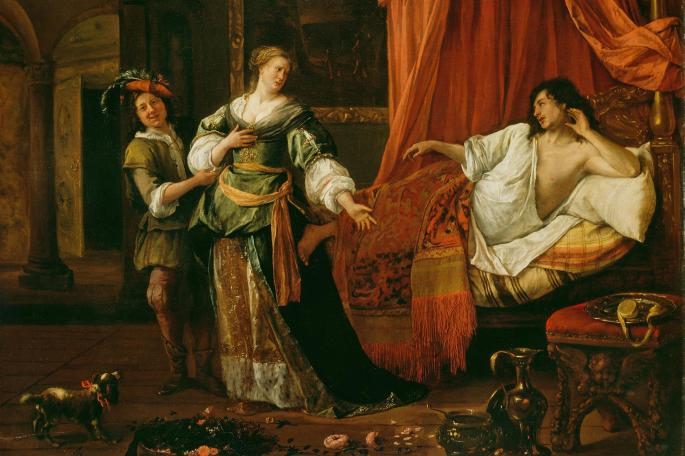 It is also true that Steen was the best of them, and that his disastrous domestic scenes — chaos in the kitchen, disorder in the bedroom — are cunning examples of art in disguise. They look smiley and sarky, but carry a heavyweight moral message, with ambitions to stamp on the fun.

All this is made clearer by a display of Steen’s religious pictures at the Barber Institute of Fine Arts, in Birmingham. Some will have known already that Steen also painted hefty scenes illustrating complex moments in the Old Testament, but I wasn’t one of them. The whole show is a surprise to me. So, too, is the light it shines on the width of Steen’s ambition.

It’s a small event: one room, in which half a dozen paintings have been padded out lightly with documentary material. At its centre is the Barber’s own Steen, a big picture by his standards, 4ft and a bit by 5ft and a bit, on which is presented The Wrath of Ahasuerus. Who is Ahasuerus, you’ll probably be wondering — as did I.

It turns out he was the king of Persia, who ruled over a vast empire stretching “from India, even unto Ethiopia”, according to the Book of Esther, in which the dramatic events painted by Steen are described. Ahasuerus (angry man in a turban at the centre) was persuaded by his chief minister, Haman (chap in hat, cowering on the left), that the Jews were a fractious and disloyal race, and that he should destroy them. Ahasuerus is about to issue the decree when his beautiful queen, Esther (elegant woman in gorgeous pink on the right), who has thrown a special banquet for him, reveals that she, too, is Jewish, and that Haman has been plotting against her race. A furious Ahasuerus, besotted with Esther, jumps up in rage and sentences Haman to death. This is the moment Steen has painted. And because he is Steen, he does it with his usual weight of detail.

In a Steen painting, there is no such thing as an innocent prop. Here, falling off the table, suspended dramatically in midair, is a huge peacock pie on a silver platter. In Old Master art, the poor old peacock is a symbol of pride, and this one — too big for the table and symbolising Haman’s arrogance — is taking a mighty fall.

Once you know who is who in the scene, it’s an engrossing painting, and there is plenty of aesthetic pleasure to be had noticing how brilliantly Steen has captured Esther’s shimmering pink robe or the Turkish carpet on the table. But it is also true that Steen is no Rembrandt: anyone searching for emotional depth or a sense of momentous salvation here won’t find any.

Instead, it’s all a bit comic. Ahasuerus is straight out of central casting as an all-purpose Oriental potentate, complete with beard and turban. Esther, dressed in contemporary Dutch finery, looks a couple of sizes too small for her dress and does not convince as a beguiling Jewish temptress. Haman’s craven cowering features the kind of actorly skills you find in a panto. In fact — and this is where the painting and the exhibition begin to rise to another level — what Steen is revealing here is the influence of contemporary Dutch theatre. Knockabout plays telling the story of Esther and Ahasuerus were a staple of Dutch drama at the time. Holland had recently been in the clutches of the Spanish empire, and the idea of a chosen people being saved by a beautiful heroine rang the Dutch national bell. So the melodrama of Ahasuerus’s pose, the hammy gestures, the sense of ill-fitting stage costumes, even the boxy space in which the scene is set, bear all the hallmarks of popular theatre. Steen has painted a moment in a play.

The show continues with an entertaining selection of his Old Testament scenes, all of which feature his trademark combination of bad acting and spectacularly anachronistic interiors. Samson is having his hair chopped off by the Philistines in what look like the dying moments of a drunken dinner party in Haarlem. Tobias and Sarah are getting married in what is surely the best room in the tavern. And turning back the biblical clock to its very beginnings, the infant Moses is tested by Pharaoh in an Egyptian palace decorated in the modest style favoured by Dutch town halls.

What all this busy temporal transportation achieves is a deflating of religious pomp. By setting his biblical scenes in poky corners of Holland, Steen is bringing the Bible down to earth. The bad acting, the big gestures, the comic details, are a clever effort to speak to the populace in a language it understands. We send comedians to Africa on our TV charity shows to smuggle deeper thoughts to a wider audience. Jan Steen has a clownish Ahasuerus gesticulating like John McCririck at Epsom for the same reasons.

In a nice touch, the Jewish population in Birmingham has been asked to react to the story of Ahasuerus and to account for its importance. It turns out their annual festival of Purim concerns exactly these events: the salvation of the Jews by the heroic Esther. And, unlike most religious festivals, Purim is an occasion for fun, drinking wine, wearing costumes and public celebration. Steen would have liked that. Indeed, judging by the painting, he may already have known it.