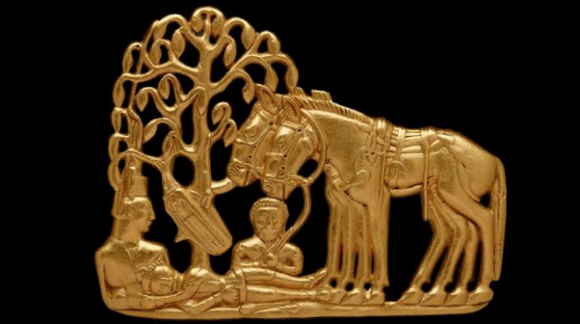 Siberia. It’s a powerful word that sets the imagination rolling. In my case, it makes me remember my mother, who was sent to one of its labour camps by the Russians when they invaded Poland at the start of the Second World War. Others will have happier thoughts, recalling a monumental train journey, perhaps, across an unfeasible expanse. The really lucky ones, the Mastermind stratum of ST readers, will have an inkling already of the fabulous role played by Siberia in the story of civilisation. The lucky ones will already have encountered the Scythians.

There is much to admire about the British Museum’s spectacular Scythians show, especially if you are fond of gold. Take your shades and drown in pleasure. But the most encouraging thing about this five-star event is the sense of surprise it triggers. How marvellous that, after all that archaeology, all that science, all those TV adventures of Tony Robinson, over all those years, it is still possible to add an important culture to the human chronicles. It’s like coming across a new species of elephant in the Himalayas.

The Scythians existed in Siberia between the 9th and 1st centuries BC. They overlapped with the Greeks, the Persians and the Romans. But they were nomads, without a written language, who left no documentary tracks for archaeologists to follow. It is also true that civilisational archaeology has generally preferred to dig pleasantly within the Mediterranean olive belt than to hammer uselessly into the frozen wastes of Siberia. So this exciting show doesn’t just introduce the Scythians to us, it also challenges our notions of what constitutes a civilisation.

The BM is practised enough in the art of exhibition-making to commence its unfamiliar account with an unforgettable display of gold. Wow. The Scythians loved gold with immodest fierceness. And in the underground treasure troves of the Siberian wastes, there was so much if it waiting to be dug up that they could fashion it into the most fulgent bling I have ever encountered.

The opening sight here is a golden belt buckle about 6in wide. Apparently, it is only half the buckle: the matching half is lost.

So, at some point, some lucky Scythian went about with a foot of this spectacular gold holding up his trousers. But wait. Look more closely into the beautiful buckle and you will see a complex story being told with rare artistic skill.

At the centre, a dead man lies on the ground under a spreading tree representing the tree of life. On the right, a pair of horses, marvellously observed, wait patiently at his feet — he is their master, so they will accompany him to his grave in the Scythian fashion. On the left, a monumental goddess, probably representing Mother Earth, cradles the dead man’s head in her lap. It’s a tender, mysterious and utterly gorgeous scene, fashioned minutely in an artistic style that will be new to you unless you are one of the lucky few who are familiar already with Scythian creativity.

The opening stretches are packed with further examples of this thrilling goldwork discovered in ancient Siberian burial sites. Most ancient gold was doomed to be dug up by tomb raiders, melted and turned into trinkets.

But the Scythians buried their notables in the permafrost of Siberia, where the gold robbers, like the archaeologists, were not determined enough or muscular enough to find it. It wasn’t until early in the 18th century that Peter the Great began collecting the output of the Scythians and putting it in his Kunstkamera. A fine portrait of him by Kneller, painted in 1698 on a royal visit to London, records a slight and beautiful young man with bumfluff who looks nothing like a Peter the Great.

Having wowed us with gold, the show gets down to the serious BM business of illuminating a foggy culture. Preserved by the permafrost, the remains of the ancient Scythians tell a gripping domestic story. A selection of leathery corpses, presented in bits, reveals a ferocious appetite for tattoos and an equally progressive taste in hairstyles. Men wore shaved heads and beards, while women pushed their hair through the holes in their hats and plaited it into lofty pylons. As I said: progressive.

As nomads, they relied profoundly on their horses, for which some of the show’s best bling was fashioned. Fearsome warriors, renowned for their archery, their bravery, their drinking, they were pioneers as well in the pursuit of narcotic highs, and would gather around tripods of smouldering hemp to suck in the smoke. The more you learn about them, the more current they feel.

All this is revealed to us in a perfectly judged mix of objects and text that pauses at intervals to confront us with a spectacular sight. A monumental wooden tomb, constructed from huge logs, tells us as much about the dimensions of Siberian trees as it does about Scythian burial customs. A wondrous gold cup, decorated with detailed scenes of Scythians stringing their bows, may have been made by Greek craftsmen for rich Scythian clients. Ha!

There is obviously much to find out still about these remarkable peoples. Metal detectorists, get thee to Siberia.