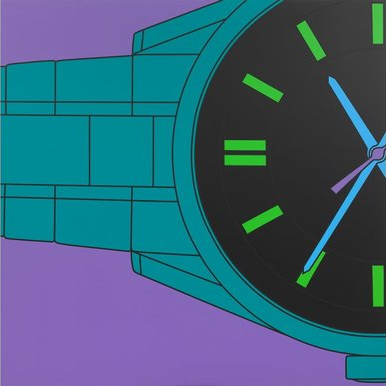 Plastered on the outside of the Serpentine Gallery at the moment are those terrifying words — Michael Craig-Martin. They are terrifying because Craig-Martin used to stalk me. Back in the last fin de siècle, I presented programmes on TV about the Stirling prize, the annual award for the best building by a British architect. At the time, our economy was soaring, the memories of the Cold War were swirling fiercely down history’s drain and Britain had embarked on a season of energetic embassy-building the like of which the nation had never seen before. In every corner of the diplomatic empire, new British embassies were going up like Barratt homes. And all of them had foyers decorated by Craig-Martin.

Inside the new British embassy in Moscow, there was Craig-Martin. In the new embassy in Berlin, more Craig-Martin. Nor was he confined to foreign outposts. In the year in which the Stirling prize was won by the Laban Centre, that marvellous dance studio in Deptford, we turned up to admire the architecture, and plastered all over it, dominating every vista, was Craig-Martin.

Time didn’t circumscribe him, either. A couple of years ago, I set off to Chatsworth, in Derbyshire, hoping for a classic country-house experience. What should loom up above the chimneypieces and twinkle luridly on the lawns but lots and lots of Craig-Martin? Reader, it was too much. I left. Barbie pink is the wrong colour to impose on a baroque setting.

The Chatsworth debacle was mostly a clash of hues. But just as fundamental is the imagery and mood he espouses. Essentially, he’s a belated pop artist who paints consumer goodies in a stripped-down, automated manner that mimics the sparseness of modern design. In Craig-Martin’s art, the objects of the modern world are enjoyed with the kind of rousing passion you find bursting out from a Post-it note.

So it was with a heavy step that I approached the Serpentine, where Craig-Martin has been given his first London solo show since 1989, and where his belated pop art might also have been expected to flop. But it doesn’t. Away from the embassies, the dance halls, the ancient lawns of Chatsworth, Craig-Martin is finally able to control every aspect of his display. And in these ideal gallery conditions, his art is allowed to reveal a deeper and truer purpose.

The show is called Transience, and the change referred to in that title is, broadly speaking, the shift from analogue to digital. Craig-Martin is 74. He looks 20 years younger, but he was born in Dublin in 1941, and moved to America just in time to watch the first wave of pop artists begin their love-hate relationship with consumer goodies. These quintessential American moods soaked into him, and by the time he appeared in Britain, in 1966, he was 75% New Yorker.

It is this cultural make-up that allowed him to favour the new over the old, modernity over tradition. But you don’t get to 74 without seeing huge cultural changes, and Transience can be understood as a history of recent times articulated through telling modern objects. In this case, specifically electronic objects.

The most eloquent of which is the lightbulb, which used to be a simple glowing blob with a huge art-historical past — Guernica; the paintings of Francis Bacon — but which has now become a complex twirl of illuminated low-voltage bends that mimic the outlines of a helter-skelter. Safe to say that if lightbulbs in 1937 were shaped like lightbulbs today, they would not have carried the harsh symbolic meaning they used to carry in art; and would not have been included in Guernica. Yes, Craig-Martin remains a belated pop artist, whose main subject is the consumer goodie, but he is also a sly observer of society’s shifts.

Walking into the Serpentine is like walking into an immaculate loft space newly decorated by Mondrian’s grandson, who, like his grandad, loves precise black outlines and glowing colours, but who has given up on old-fashioned rectangles and squares, replacing them with the pared-down outlines of desirable electronics: iPods and Apple Macs, Xboxes and digital bathroom scales, new headphones and the batteries that drive them. Every electronic goodie is treated to a careful portrait, as if it were something special, when in fact, in our world, everything on the walls is two a penny.

Still life has never been an innocent genre. From its earliest appearance in art, it has been a vehicle for smuggled meanings. By selecting and mythologising the things we use to make our life easy, Craig-Martin is commentating sneakily on the way we’ve changed.

It’s beautifully done. Every room has a different garish colour scheme, and with no accidental colour clashes to deal with, the Serpentine has been turned into a genuinely transporting, all-enveloping environment. At Chatsworth, the chinoiserie room is decorated floor to ceiling with beautiful stereotypes of Chinese life. At the Serpentine, the galleries surround you, floor to ceiling, with cool, spare, passionless emojis that calmly evoke the elegant facelessness of modern existence.

What’s new is the whiff of nostalgia: the note of regret. Craig-Martin is finally feeling his age, thank God, and the show’s journey involves recurrent reminders of the things we used to use. A giant cassette tape. An old portable telly. The bare and bulging lightbulb. TS Eliot’s Prufrock measured out his life in coffee spoons. Here, Craig-Martin measures out his with defunct electronic goodies.

These days, everything at the expanded, dual-hearted Serpentine is part of a double bill. And having gratefully admired the Craig-Martins in the old gallery, I made my way to the new one, absent-mindedly expecting to be confronted by more British art. Robyn Denny was a marvellous abstract painter who died last year and who fully deserves to be looked at again. But my mind was playing tricks on me. Instead of Robyn Denny, I got Simon Denny, which is like ordering Dom Pérignon and getting a Coke Zero instead.

Not only is Simon Denny not British, he was also just about the most annoying exhibitor at the Venice Biennale this year, where he represented New Zealand, and where his ghastly contribution involved destroying the beauty of Sansovino’s Renaissance library in San Marco by filling it with Perspex cabinets throbbing with electronic lighting.

Denny’s shtick is to seek to understand the systems and patterns that drive the modern world by evoking them with graphs, models, logos, flowcharts and inspirational quotations. It’s the language of the management away day turned into an installation. In Venice, his subject was international travel and trade. Here, he looks at hacking patterns and their influence on the corporate workplace.

Like all the worst nerd art, it presents a massive tonnage of information. But offers scarcely an ounce of visual pleasure.
Michael Craig-Martin and Simon Denny, Serpentine Galleries, London W2, until Feb 14