Contemporary art has revealed a savage talent for colonising other art forms. So the fact that two shows seeking to colonise the processes involved in making a record have arrived simultaneously should not surprise us. Art and music have been sharing a gene pool since the 1960s. Think how many pop singers went to art school. Think of John and Yoko. The impulse to make music is mixed up with the impulse to make art. That said, the arrival of two different shows, in two different places, both exploring the same phenomenon, is definitely a turn-up.

In one of these events, PJ Harvey, the creator of inventive pop music with a surreal edge, has set about recording her new album sitting in a glass box while people watch her. In the other, Christian Marclay, the conceptual artist, has installed a machine for pressing vinyl in south London’s White Cube gallery, and will spend the next three months making records on it. One of these art events is a hit. The other is a miss. So, pop pickers, which is which?

Marclay is best known for The Clock, his fabulous 24-hour tribute to the marking of time in the movies and nothing less than one of the signature art pieces of our time. The current White Cube show is not as crazily ambitious — nothing ever will be — but, again, we encounter an artist obsessed with the minutiae of film-making who is particularly inventive in the deployment of sound and ridiculously hardcore in his work ethic.

Where The Clock offered one experience, this show offers several. It’s a complex confederacy of artworks in different media, from performance to painting, jigsawed cleverly together across the gallery and centred on the impact of sound. Down the central corridor, in a piece called Pub Crawl, there’s a gauntlet of 11 film snippets, projected at leg height, featuring someone’s feet walking along grubby pavements, stomping on beer cans and bottles. Every now and then, the feet stop and the mysterious stranger — Marclay? — picks up a stick and beats out a rhythm on one of the bottles, or on a pint glass filled with ambiguous yellow liquids from the night before. It’s squalid, but also uplifting. If you’ve ever walked home at dawn from a great party, you’ll recognise the textures and know the mood. 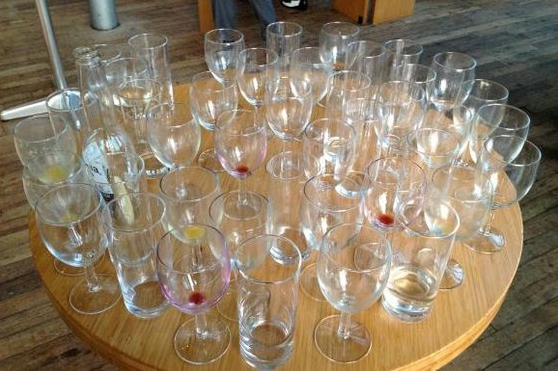 Apparently, in the early days of hip-hop, Marclay was a pioneering DJ in New York, so he knows how to beat out a dance rhythm on a beer glass, and his interest in homemade sounds is ancient. Pub Crawl is ultimately joyous, a celebration of accidental urban noises that makes a pleasant change from the usual grim observations of Britain’s drinking culture. There’s something Bruegel-like about Marclay’s understanding of alcohol-fuelled human happiness.

Elsewhere in the show, the fascination with sound takes various forms. Another of the best rooms is completely and perversely silent. Walking into a huge floor-to-ceiling video projection, you find yourself surrounded by comic-book words describing dramatic sounds — wham, boom, whirr, splodge, bleep. Each sound-word has been individually imagined on the engulfing walls. Whirr forms dizzy circles. Whoosh whooshes madly round the room. Rrrumble stays low as it shivers and twitches. Beep beeps here, then there, then everywhere. It’s exciting. And the silence of these noisy words makes your ears grow ravenous for sound. I came out of there like a man who has crawled across a desert and is gasping for water. I need a ka-splatt. Any ka-splatt.

The show also includes a room of paintings in which the same onomatopoeic words have been splashed across messy expanses of abstract expressionist colour, as Roy Lichtenstein meets Jackson Pollock. Unfortunately, the fusion doesn’t quite work. Marclay is many good things, but a sensuous abstract expressionist is not yet one of them. It’s all a bit stiff. But it will get better.

I didn’t see the finale of the show — it hadn’t happened yet. What will happen, every weekend for the next three months, is that the London Sinfonietta, accompanied by a clutch of improvisational composers, will be performing in the gallery, writing and creating new music. This music will then be mastered on site, pressed onto 12in vinyl records in a special portable disc-pressing machine that looks like something in which the aliens arrived on Earth in a B-movie of the 1950s; and, finally, Marclay will design and print the sleeves for the records, also on site. Then they’ll go on sale. I’ll certainly be back for my record.

Where Marclay’s installation succeeds notably is in giving sound an unexpectedly physical presence. The entire show seems to tease the senses and swap them round. Sound becomes something you see and touch; which feels as if it is forming crystals in the space. It’s a show that goes ka-tingle boom. And you can’t have higher praise than that.

At Somerset House, meanwhile, in one of those pop-up art shows pioneered by the Artangel organisation, the old gym formerly used by tax officers working for the Inland Revenue has been turned into a recording studio in which PJ Harvey is recording her new album. The studio can be looked into through a set of big windows, and several times a day we voyeurs of art are allowed to queue up and peep.

Peeping, as an art experience, has a marvellous past. Think of those 17th-century Dutch interiors, perfect in every detail, that could only be looked into through an opening in a box. More recently, the sight of Tilda Swinton sleeping in a glass coffin at the Serpentine, in 1995, was fascinating, spooky, sexy and intimate.

The present installation is none of those things. All that happens is that Harvey and her musicians continue the tedious process of making a record, while we fame-groupies gawp at her through the glass. It didn’t feel like a transportative art experience. It felt like an awkward way to hype a record.