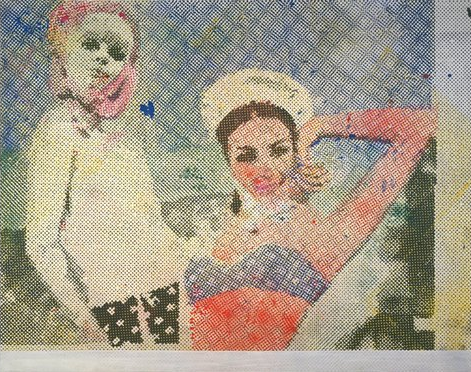 Another week, another German show. As our galleries continue to commemorate the 25th anniversary of the fall of the Anti-Fascist Protection Rampart (otherwise known as the Berlin Wall), who should turn up at Tate Modern but Sigmar Polke?

Another of the big hitters of postwar German art, Polke has long been a favourite at the Tate. You can always recognise Tate favourites: they pop up in more of the mixed shows and loom larger in the changing displays. And not only at the Tate. From about 1980 until 2005, Polke was such a familiar presence at biennales, international surveys and theme shows that I began crossing the gallery to avoid him. He was everywhere.

At the time, painting was going through its “deconstructivist” phase. If you watch cooking programmes on the telly, you will know that cooking has recently been going through just such a phase as well. Instead of giving you a sausage roll for your dinner, deconstructivist cooking ethics require the sausage filling, the puff pastry and the pan-fried sausage skin to be served separately, with a mushy-pea jus reduced three ways.

These same atomising drives drove deconstructivist painting. A typical Polke of the 1970s would be painted on three stripes of different material, sewn together. Two of those stripes would be painted with spacey images appropriated from a book — a giant caterpillar, say, smoking a hookah, from Alice in Wonderland. The other stripe would show something strikingly unrelated, such as a basketball player burying a dunk. In between would be dots. Hundreds of them. Scruffily painted. Vaguely reminiscent of dot-printing.

None of this would make quick visual sense. All of it would fizz simultaneously before you, forcing your eyes to dart about, trying to complete the image. That’s how a typical mid-period Polke worked. Indeed, I have just described to you Alice im Wunderland, from 1972, which hangs in Room 6 of the current show.

The deconstructivist gonks at the Tate loved the imagistic uncertainty of all this because it passed on so much of the creative responsibility for the meaning of the work to the viewer. For me, though, it was all too hit and miss. I don’t turn to art because I am artistic too. I turn to art because someone who is better at being artistic than I am has already done the cooking. When it comes to deconstructing the painted image, I am a sausage-roll man. 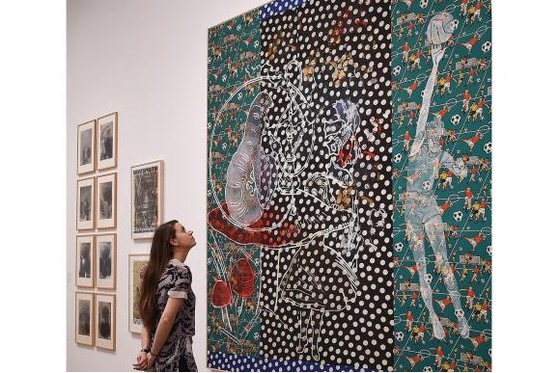 So it is with genuine surprise that I am able to report that the Polke show is a forceful and gripping event. Yes, mid-period Polke, with his incessant layering and dotting, is everything I feared. But the beginnings of his journey are really exciting. And so, amazingly, is the end.

Polke was born in Olesnica, in Silesian Poland, in 1941. His family left Poland at the end of the war to escape the advancing Russians. Later, they moved to East Germany. Then they decamped to Düsseldorf. This is not a background that leaves you with your certainties in place.

Polke’s early work, the first things we see in a helpful chronological hang, is notably prickly. Initially, it looks like pop art. A large chocolate bar, some white shirts and three folded socks: all have pictures to themselves. Painted in the early 1960s, they seem to be the era’s usual celebration of consumer culture. But there’s something glum about them, something matt and faded, which turns the mood from celebratory to accusatory. It’s hard to think of a less glamorous consumer triptych than the sight of three socks in one picture.

From the start, then, the sarcasm is hard-core and the disillusion palpable. In his next suite of paintings, Polke discovers the raster dot — the dank German answer to the ubiquitous printing dot that Roy Lichtenstein had already had such fun with in his Mickeys and true romances. In the first of his grungy dot paintings, whose portrait does Polke record? Lee Harvey Oswald, that’s who. This isn’t just German pop v American pop. This is despair v hope; Europe v the Yanks. 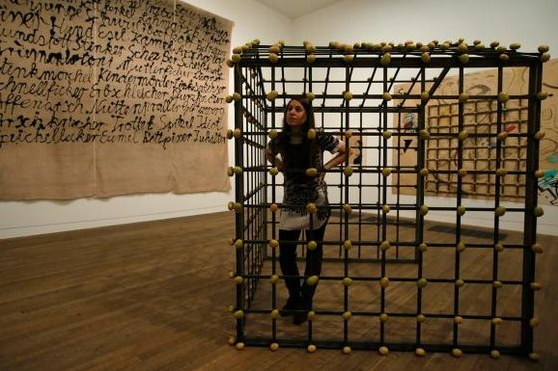 His next victim is modern art itself, which comes in for two hilarious roomfuls of mockery. Minimalism, systems art, action painting — all the notable isms of the 1950s and 1960s are sent up furiously. Potato House, from 1967, is a rectilinear shed that would have been made from metal rods and precise plastic junctions if it really were a piece of systems art. But, because it is something Polke knocked up, it’s made of wood and potatoes.

The Large Cloth of Abuse is a huge action painting featuring Pollock-style drips of black, spelling out an assortment of traditional German terms of abuse. A passing German gallerist helped me with the translations. A Nuttenpraller is a chap who runs away from a prostitute without paying. A Schnellficker… Well, you can probably guess. During this hilarious epoch of tirades, Polke is against spiritual artists, against artistic shamans, against Malevich, against grid art. I laughed out loud at the portentous row of leather-bound volumes high up on the wall, purporting to contain his collected writings. Hee-hee. This is Polke taking an obvious poke at his notoriously overpublished teacher, Joseph Beuys.

All this is brilliant. Early Polke is a naysayer with a vengeance. And the fact that the pictures with which he is doing his naysaying are so pretty is a fabulous plus. Unfortunately, everything changes when he discovers drugs.

No artist, ever, has made better art stoned than sober, and Polke continues this line. LSD, opium, fly agaric: he used them all, and the smoky and inchoate art that resulted takes up the middle of the show. Frankly, I had given up hope of the purposeful Polke being glimpsed here again when, waddyaknow, out he pops.

A series of sinister paintings of looming watchtowers, made in the late 1980s, is once again the work of an Establishment-basher who doesn’t like being guarded or spied on. After all the splodges, the overlaps, the hailstorms of dots, the final stretches of this journey are impressively coherent. Polke, who died in 2010, spent his final decades undoing the undoing.

By the time we reach his last pictures, he has become a quietly monumental abstract painter. A row of dark works from 2007, painted with lustred blacks and blues, suggestive of looming caves and mighty skies, is sublimely beautiful. Perhaps he did learn something useful, after all, from smoking all that opium.