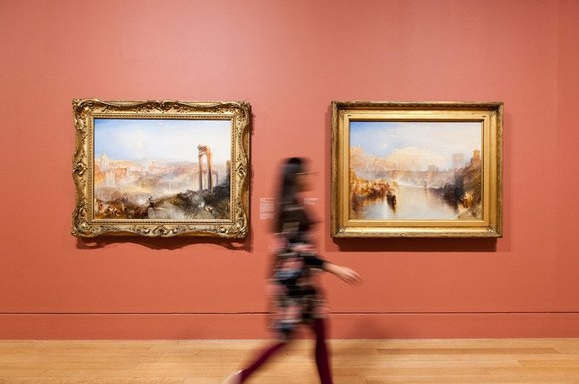 By bringing us a show devoted to the final years of Britain’s greatest painter, Turner, Tate Britain is challenging the opinions of Britain’s greatest art critic, John Ruskin. Having once been Turner’s staunchest supporter, Ruskin came to suspect that something awful had happened to his hero as he neared the end of his career. Reviewing the Bacchus and Ariadne displayed at Turner’s memorial exhibition of 1856, Ruskin opined that the throbbing yellow vortex should be “banished from these walls with all kindly haste”. Turner’s “power of hand and eye”, he declared, had failed.

Tough stuff. Particularly since it flowed from the pen of a critic who had launched his own career with an exceptionally fierce defence of Turner in the pioneering tome Modern Painters. Ruskin had always “got” Turner. Now he wasn’t getting him. Who, therefore, is right? Tate Britain, which describes Turner’s last paintings as “some of his most exciting and innovative work”? Or Ruskin, who decided that The Angel Standing in the Sun, exhibited in 1846, was so bad that it was “indicative of mental disease”?

On the evidence gathered here, in a show that considers Turner’s output between 1835 and 1851, from the age of 60 to his death at 76, I would have to say that both camps have a case. Tate Britain is right to celebrate much of what the old Turner produced, particularly his magical watercolours. But Ruskin was also right to discern pottiness in the worst of the symbolist oil paintings.

Late work is currently in fashion in exhibition circles. Tate Modern has enjoyed a huge success with its tribute to Matisse’s cut-outs. Late Rembrandt is soon to open at the National Gallery. What all such outputs share is a sense of fearlessness: a devil-may-care confidence to challenge the rules. That’s why we like them.

In Turner’s case, this sense of freedom has an extra appeal because it seems so extraordinarily prescient. When you look with modern eyes at a painting as pale and formless as The Disembarkation of Louis-Philippe at the Royal Clarence Yard, Gosport, from 1845 — yellow fogs, purple fogs, white fogs, hovering in horizontal patches — you see a Rothko before its time.

To its credit, Tate Britain is keen to dispel such misreadings. Instead, the show’s ambition, according to its paperwork, is to reattach Turner to the times that spawned him. Yes, these light-filled horizons and swirling vortices are extraordinary, but to see them as futuristic precursors of modern abstraction is to misunderstand them badly.

To make that point, the show opens with a touching reminder of the state Turner was in in 1835. According to his physician, the age of 60 marked “the commencement of senility”. His eyes were certainly failing. Included here are two pairs of his spectacles, thick as bottle-bottoms, rescued from his studio after his death. The catalogue, which reads like a medical history book for large chunks of its length, decides that he was probably suffering from severe diabetes caused by chronic alcoholism.

On the other side of the room, his death mask girns up at us. Blimey. It’s a startling thing. Was Turner’s head really that tiny? Did he really have no teeth left? Is that anus-like puckering in the middle of his head really his mouth? At a stroke, the sad little death mask shatters the modern image of the futuristic pictorial giant. 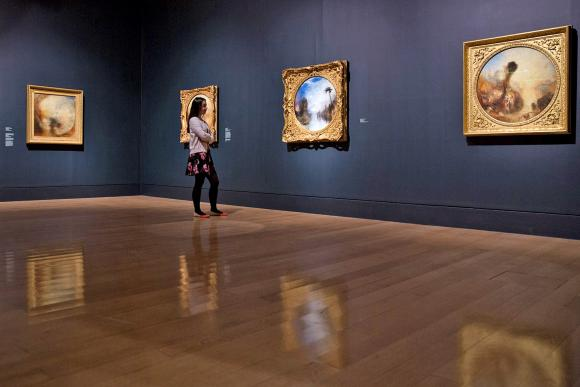 The repositioning continues with a room devoted to his Venice paintings. Venice and its delicious mists have always appeared to occupy a central role in Turner’s output, particularly his late work. The painter and the floating city were surely made for each other: Turner with his appetite for fogs and blurs; Venice with its lack of boundaries between the sky and sea.

Surprisingly, however, the captions point out that Turner only visited Venice on three short occasions. All told, he seems to have spent just a month there. Given how many pictures he produced of La Serenissima, and what a central role it plays in his reputation, this is revelatory information. It serves to make clear how much of what we assume to be sensitive description in late Turner — the wondrous grasping of subtle atmospheric effects — is nothing of the sort. What we are actually looking at is fabulous imaginings based on templates inside his head.

It’s a point made particularly clear by a view entitled St Benedetto, Looking Towards Fusina, from 1843, a typically hazy gaze along a canal with a sunset at the end. It turns out the picture describes somewhere that does not exist. There is no church called St Benedetto on the Fusina side of Venice. Turner has made it up. These are not particularly sensitive atmospheric descriptions. These are particularly foggy capriccios.

Having presented us with a scarily decrepit image of the ageing Turner and challenged our understanding of him as a preternatural progressive, the show goes on to tackle the thorny issue of his art’s completion: is it finished or unfinished? Having left the nation the contents of his studio, Turner did not, alas, leave an accompanying ledger differentiating between sketches and finished pictures. The modern world has duly been granted plenty of space in which to imagine them wrongly. 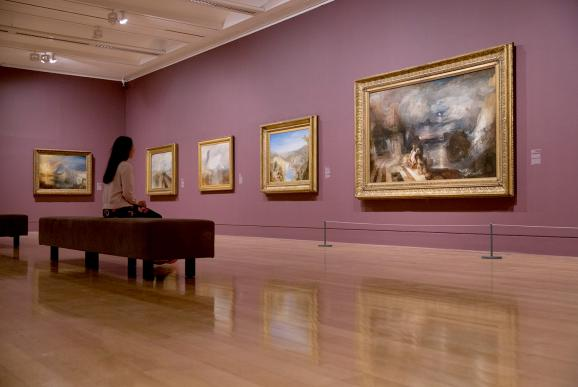 The shimmering white sketch of Lake Lucerne that hangs in the final room can easily be mistaken for a minimalist abstraction: a Robert Ryman, say, from around 1970. But by showing it next to Mercury Sent to Admonish Aeneas, from 1850, a particularly tortuous blend of heroic nature and tiny mythology that was exhibited in Turner’s last show, the Tate curators make entirely obvious what the painter himself considered a finished picture. To see the whiteness of the Lucerne sketch as anything other than a group of first touches constitutes appalling modern ignorance.

All the way through this event, the Aeneases, the Actaeons, the Germanicuses keep returning. Instead of a preternaturally prescient modern painter, what we actually keep encountering here is a thunderous nostalgist, desperate to evoke the past and lose himself in its epic fogs. Another strategy is to distress the present. In masterpieces such as Rain, Steam and Speed, and the Burning of the House of Lords and Commons, Turner succeeds in giving his own times the drama and heft of a Homeric adventure.

Rain, Steam and Speed is as great a painting as it is not just because it is such an atmospheric rendering of a steam train speeding through the mists, but because it makes the little train’s journey feel so volcanically significant. Turner at his best takes his own piddling times and enlarges them to mythic dimensions.

That’s the good Turner. The bad Turner, the nutty one lamented by Ruskin, is a clunky symbolist who oversteps the mark. The show is loudly proud of the room it has filled with his “square paintings” — tequila-sunrise fantasies on shaped canvases — and points out that they have never been seen together before. I suggest there is a good reason for that: Ruskin was right when he called them Turner’s “nonsense pictures”.

War: The Exile and the Rock Limpet features a huge Napoleon, with the proportions of a giant heron, standing on the edge of a fiery sea. It’s a much repeated fact that Turner wasn’t very good at figures. Most of the time we are happy to accept this failing, because the rendering of the landscape around the figures is so thrilling. But in the case of the worst of the square paintings, Glaucus and Scylla, no such forgiveness is possible.

Fortunately, having convinced us that his nostalgic symbolism is every bit as bad as Ruskin said it was, the display spends the rest of its length confirming finer Turnerian truths. In particular, it keeps making obvious that when it comes to capturing dramatic atmospheric effects — the swirl of a storm, the fire of a sunset, the crash of the waves — he has never had an equal.

A strange show, then. Lots of magnificent art. Plenty of terrible art. Turner’s real identity as a nostalgic symbolist successfully proved. The misconception of him as a proto-modernist successfully disproved. All of which results in a final image of Turner as… Hmm. That’s where it gets foggy.