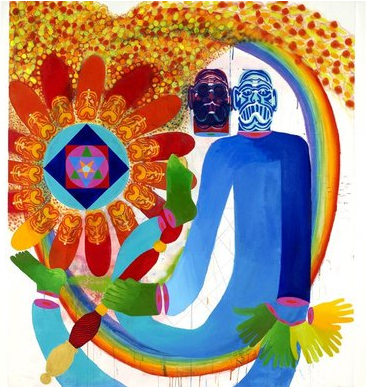 I have been looking forward to 2014 because it’s an anniversary of sorts. A tenuous anniversary, agreed, but an anniversary nevertheless. This year is the 140th anniversary of the first impressionist exhibition. In 1874, in the spring, a group of artists in Paris — Monet, Pissarro, Renoir, Degas, Cézanne — banded together to organise their own show in the former studio of the photographer Nadar. They did it because they had to. In that momentous first show of theirs, the impressionists were taking on their own art world. And the reason I want to remember their effort now is because we’ve managed, somehow, to get ourselves into an identical position. We, too, need an impressionist revolution.

Back in 1874, the French art world was centred on a popular national exhibition, run by the government, called the Paris Salon. The Salon was the Turner prize of its day. Always controversial, always in the headlines, always well attended, it was the most popular exhibition in the world. In 1874, 450,000 visitors crowded into the Paris Salon. The first impressionist show was seen by a mere 3,500.

Just like today, numbers counted in 1874. The popularity of the Salon gave it enormous cultural power, power that was used to enforce the Salon world-view on the whole of art. The exhibition itself was selected by a group of judges who owed their position to the Salon system. They were chosen by other judges who had previously been in the same position. Invariably, the artists they favoured were like-minded. Pompous moralising mythology that made you think — the conceptual art of its time — was particularly well rewarded.

The Salon preferred it because it engaged the mind, not the heart, and could therefore be controlled. Humourless, gutless, long-winded and pseudo-learned, Salon art was as tedious to encounter as… well, as the long-winded film by Laure Prouvost that won the Turner Prize this year. If ever I saw an artwork that will not be talked about in 10 years’ time, it was Prouvost’s dreary movie about a fictitious grandad who knew Kurt Schwitters.

The impressionists wanted to make art that connected more viscerally with their audience; an art that circumnavigated the brain and, in Francis Bacon’s excellent phrase, spoke directly to the senses. But instead of encouraging their creativity, the Salon system was crushing it, standardising it, invalidating it. Take a look around you at the way our own art world is operating and you will see a replica of that system.

Of course, it uses different names. Today’s version of the Salon is the Tate empire, and the “archipelago” of associated directors and curators who drip from it and surround it. These people think alike, act alike, travel alike, reward alike and decide alike. Whereas artists, in my experience, are all very different, curators, in my experience, are pretty much the same. They read the same magazines, attend the same biennales, go to the same conferences and graduated from the same curatorial courses. They write the same, look the same. And, most destructively of all, they think the same.

The Turner prize used to be chosen by a jury that included presences from outside this curatorial cartel. Journalists and critics used to be involved. I remember a memorable contribution from the writer Lynn Barber, of these very shores. But the presence of outside forces on the jury upset the inside forces, and these days the decision is made by a curatorial mix that is extra-pure. No critics, no journalists, no public, no artists, just curators.

Now, I am old enough to remember an art world when curators were thin on the ground, rather than thick. Indeed, a quick flick through the annals of art shows us that, for 30,000 years or so, art got along perfectly well without any curators whatsoever. Michelangelo didn’t need a curator to paint the Sistine ceiling. Rembrandt managed without them, too. As did Velazquez, Leonardo, Caravaggio.

These days, however, the thick layer of management formed by the curator stratum makes all the important decisions. When a committee needs members, these are the people who sit on it. When an artist gets a gong, these are the people who nominate him. Go to a must-see art-world event like the Venice Biennale and you will find the managers outnumbering the artists by many thousands to one.

Of course, there are other evils at work in contemporary art. Most of the complainants who have been lining up in recent years to express their dissatisfaction with the way art is going — in case you’re wondering, I am not alone in my groaning: the reason I am writing this article is because discussion of why “the end of art is nigh” has become something of a literary genre — have focused on the corrupting influence of money. Too many rich oiks, with too much unearned cash, are splashing it about grotesquely, go the complainers. And they are right. To see some berk with more dollars than sense spending $142m on a Francis Bacon in New York before Christmas was deeply dismaying. Think of the rainforests that could be saved, the hospitals that could be built, the children who could be clothed and fed and cured if this sort of amount were not being squandered on trophy art.

But money is an easy target. And always has been. Ever since art came off the cave wall and became portable, those who could afford to buy it have bid against those who could not. And won. Time and time again, in every moment of its complex history, art has had to reach an accommodation with money. Yes, the new breed of collectors, from Russia, China, Arabia, have awful nouveau-riche tastes. Yes the Frieze art fair is appalling — no place to look at art. But an art world that has survived the antics of the Borgias, the Medici, the Della Rovere, can survive the oilygarchs and the hedgefundistas. A greater danger is the enemy within.

So let 2014 be the year in which someone, anyone, makes some sort of move to challenge the curatorial power of the Tate empire. It can happen. Back in 1988, when a mouthy young art student from Goldsmiths called Damien Hirst took over a warehouse in south London and filled it with the art of his artistic friends in a show called Freeze, he started a revolution that not only resulted in the best, most exciting, most visceral British art of recent times, but led, ultimately, to the opening of Tate Modern. As the impressionists found out in 1874, artists can change the world.

That’s why my first exhibition-going act of 2014 was to visit New Contemporaries at the ICA. Every year, the ICA gathers up the “best” art being made in Britain’s art schools. The selectors are artists, not curators. Their hope is to find significant artistic presences among the students. It’s a hope that is usually dashed. New Contemporaries is always messy, flighty, half-formed, foggy, immature and irritating. This year is no different. But precisely because the managers of the Tate empire have not yet managed to curate the life and the energy out of it, it has a snap to it, a crackle, a pop, that was music to my ears.

Catherine Hughes makes neon-lit window displays that mock the advertising imagery of holiday firms and car manufacturers, and which are rather beautiful in a sinister way. Hardeep Pandhal, or perhaps his mum, knits ridiculous jumpers with the faces of cultural heroes bulging unheroically out of them. Bruce Parry, the ethnographic marine, gets one jumper; Tupac Shakur, the dead rapper, gets another. Also amusing, and similarly hopeless in tone, was Matthias Tharang’s film of a very fat and very nude man building a ziggurat of bricks, then destroying it. All that fat and sweaty effort for nothing. Sounds like life!

Thus, humorous nihilism is the preferred student tone of today. That’s the spark. Where’s the bonfire?