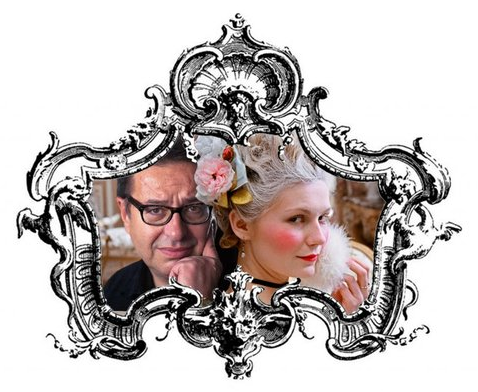 If a vote were ever arranged to find the silliest name for a great era of art, my tick would go next to “Rococo”. What a weird name that is. Just saying it makes you feel unserious. Have a go, goldfish away. Rococo. Rococo. Rococo. It doesn’t get any better, does it? Having had to say it a lot recently while making a television series about it, I can assure you that the term “Rococo” never fully loses its aura of childish meaninglessness.

Perversely, though, it does have a meaning. Of sorts. The origins of Rococo lie in the French word “rocaille”, which describes ornamental shellwork of the kind you find on grottoes. You know those ornate fountains you see in the gardens of palaces, which look as if they have half the sea bed attached to their rocks? That’s rocaille. Early in the 19th century, when these kinds of things were being classified by earnest European scholars, some wag among them decided the decorative art of the 18th century did not deserve a fully serious classification. The art of the era was merely a bad version of barroco — baroque, to you and me — and therefore deserved to be called Rococo. It was an insult. The art names that stick usually are.

Another problem, tied in again with its shell-like shapelessness, was the lack of agreement about its time span. As I see it, the Rococo age lasted for pretty much the entire 18th century. At one end, there’s Canaletto. At the other, there’s Goya. In between, there is an Eton mess of artistic jumbles, beginnings and ends, across all the arts. But one thing I noticed early in my investigations was that few Rococo heroes and achievements were at all keen to brand themselves “Rococo”. Take Balthasar Neumann, the stupendous German architect whose brilliance had me shuddering with joy as I stumbled around Bavaria on my Rococo pilgrimage.

Bavaria is packed with Neumann’s work, and all of it seems to fit the Rococo tag admirably. The interior of a typical Neumann church will be constantly throbbing and swirling as it twists this way and that across the heavens; there will be boatloads of shapeless shellwork up there; the whole dizzy expanse will look as if it weighs nothing. If that isn’t a Rococo interior, what is? Consider, too, his dates: 1687-1753. They are obviously early-Rococo dates, no? Well, I think so. But in Bavaria, the people you talk to insist that his work should be seen as “late baroque”. They get very firm about it when you push them. Neumann was not Rococo.

The same thing happens at the other end of the story, with Goya. Look at his dates — 1746-1828 — and you have a classic late-Rococo life span. Enjoy the gorgeous tapestry designs he made for the Spanish royal family in the 1770s — you can’t miss them: there are several rooms full of them at the Prado — and you are enjoying some very lively and very obvious Rococo painting. But try to call Goya a “Rococo artist” and Spanish experts start butting in immediately to remind you that he was so much more than that.

Here, then, was an art movement that nobody wanted to belong to; whose chief distinguishing feature was its shapelessness; which hardly anyone takes seriously; and whose name sounds like something one baby might gurgle to another. Reader, trust me when I tell you that making a television series about the Rococo is a keen test of one’s art-historical mettle. So why bother?

Because every dog deserves its day, of course, even in the hallowed halls of TV art history. And, more important, because the sight of so many naysayers running in one direction is a reliable indicator of something interesting happening in the other direction. If nobody wants to be thought of as Rococo, then the Rococo must have been doing something telling. It took me a while to spot what it was through the shimmering of all that silk and the throbbing of all those seashells. Eventually, though, the truth about this decadent, orgiastic, selfish, impractical, immoral and virtual age begins to solidify into an outline. The Rococo, you realise, was an early version of our own times: it invented the modern world. Nobody wants to be Rococo because nobody really likes looking too closely in the mirror.

In my series, I spend three films pointing out the similarities, as subtly as I dare. The first film is about travel, and its ambition is to recognise in various aspects of the Rococo age — Canaletto, the grand tour, the pilgrimage trails of Bavaria — the birth of the modern passion for holidays. Without the Rococo, I insinuate, this paper would not now be boasting the excellent Travel section that it does.

Film two is about pleasure. It’s the naughtiest of them, and some will think the most typical. The blunt truth of it is that the Rococo age was obsessed with sex. And not just your one-on-top, one-below variety. Casanova, remember, was a Rococo writer. So was the Marquis de Sade. Look into the details of what people are doing to themselves in a Boucher painting and it makes the bathroom in the Big Brother house look like a cell in a Cistercian monastery. Long before we sold our soul to the gods of sex and celebrity, the Rococo did the same.

The cost of all this preternatural Rococo decadence was, inevitably, an on/off relationship with reality. Take Marie Antoinette’s phoney village in Versailles — the notorious Hameau de la Reine, built between 1783 and 1788. As you probably know, because you have probably seen Sofia Coppola’s cult movie, in which Kirsten Dunst plays the severely overdressed monarch, the Hameau was the world’s largest doll’s house: a full-size pretend village filled with picture-book cottages and hand-picked farm animals. Marie Antoinette herself would do the milking in the morning — after her maids had carefully washed down the cows. The Sèvres factory made special milking pails for her, too, from the finest French porcelain. Dressed in a plain straw hat and a matching muslin dress, the queen of France would wander about her bespoke village pretending she was a simple country girl.

The usual modern reaction to this outrageous royal behaviour is to see it as the final straw: the last retreat from reality; the nail in the coffin. No sooner had the whitewash dried on Marie Antoinette’s pretend village than the French Revolution broke out, and out came the guillotine. Another Rococo hero, Madame Tussaud, who had been working for 10 years at Versailles, teaching art to the younger royals, was even given the job of making convincing death masks of the decapitated family, to be carried through the streets of Paris on poles. It was the start of a very successful business.

We were, therefore, definitely being predicted here. Sorry, but the act of building a pretend village in Versailles in order to lead a pretend rural life at weekends is not all that different from buying a holiday cottage in the Cotswolds. Are the Alex Jameses and Hugh Fearnley-Whittingstalls of our world doing anything particularly different when they set themselves up as cheese-makers and goatherds? The only significant difference is that Marie Antoinette could afford to make the Cotswolds come to her, in her pioneering Grand Design.

Even here, she was being prescient. Turn on the telly these days (when I’m not on it, of course) and you will see little else but a relentless confusion between “reality” and falsehood. All those awkward cooks who dress up as Tudor village folk in order to show us how Henry VIII’s kitchen operated are merely following in Marie Antoinette’s footsteps. All those naughty contestants misbehaving in the Big Brother house were beaten to the bell jar long ago by the Rococo era.

So the third film is about where all of the decadence and fleeing from reality has to lead. I’m afraid it’s not good news. I need probably only tell you that this is the film with Goya in it for you to suspect that it’s about the onset of darkness and madness. I had better stop there. I’ve said too much already. But if you can get hold of a copy of Goya’s Caprichos, the brilliant book of dark etchings he brought out at the last moment of the Rococo, in 1799, look particularly closely at plate 68, where two women roar through the skies on a broomstick. If that’s not a game of quidditch, then I’m Louis XVI.

Rococo: Travel, Pleasure, Madness starts on Tuesday on BBC4. Simon Russell’s soundtrack to the series is available on CD from amazon.co.uk, £7.49