Laura Knight was a woman on a mission — and a retrospective at the NPG shows flashes of genius. 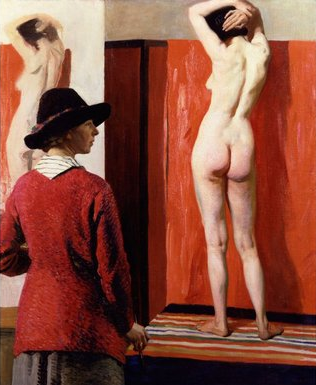 Imagine Miss Marple. Now put a paintbrush in her hand. Now tell her that female artists will never be a match for men, and no, she cannot become a member of the Royal Academy, because the academy is a male preserve. Imagine her indignant snorts at this suggestion. Imagine her storming out and riding off down a country lane on her bicycle to sort it out. Congratulations. You have just imagined, in condensed form, the career and presence of Dame Laura Knight.

Knight was one of those forgotten 20th-century British artists whose name was on many lips when she was there, but on nobody’s lips once she entered the domain of history. There was once a time when everyone knew about Dame Laura Knight. Today, we recognise the name and not much else. It’s a sit­uation the National Portrait Gallery has set about adjusting by gathering up a selection of her work.

Can an artistic career be simulta­neously regressive and progressive? Until I sped through this display — it’s a snug show — I would certainly have answered no. Regress goes one way, ­progress another way, and the two are opposites. Knight (1877-1970), however, seems to have pulled it off. In her sexual politics she was forcefully frontal, most spectacularly in 1936, when she became the first female artist to be elected to the Royal Academy since Angelica Kauffman in 1768. To put her achievement into ­perspective, compare the 77 years tennis had to wait for Andy Murray with the 168 years British art had to wait for Laura Knight.

She was also a war artist who covered the Nuremberg trials. She fought recurrently, on many political fronts and in many organisations, for the rights of female painters. And she sought, ­generally, to bulldoze her way to the top of any queue she was in. Bravo, Dame Laura Knight.

Yet the progressive momentum that characterises her career was not mirrored in the stylistic journey presented to us at the NPG. Stylistically, Knight was one of those backward English realists who seem never to have fully accepted that the 20th century had begun. When she was finally voted into the academy, in 1936, Mondrian was painting some of his sparsest rectangular abstractions and Picasso was producing his most radical surrealist distortions. Knight, meanwhile, was painting clowns and touring the gypsy encampments of Britain in a Rolls-Royce. Standing firm against every modern trend, she has had to wait until now for her backwardness to appear irrelevant.

By focusing on her portraits, the National Portrait Gallery can give us only a fragmentary sense of these confusing developments. Rather unfortunately, the show commences with Knight’s best and most revolutionary work, a marvellous self-portrait from 1913 in which she shows herself painting a female nude. It’s unfortunate because this startling image makes everything that follows feel like a falling-off.

At first, you think you are looking at a country gal in sensible country clothes doing some window-shopping. It takes a moment to realise that the woman in the hat at the front of the picture is actually the artist — you can just about make out the tiny paintbrush in her hand — and that the gleaming white nude behind her is not a shop-window dummy. In fact, the beautiful nude appears twice, once in the flesh and again on the painter’s easel. Since both nudes are the same size, it takes another moment to discern which is which.

This, then, is a painting that shifts here and there before settling on its final presence. An adjacent caption explains that Knight painted the intriguing self-portrait specifically to challenge the art-school rule that women were not allowed into life classes. They could do faces and hands, but not bodies. In her self-portrait, she turns her back on us, a tad contemptuously, and sides with the porcelain-white nude she is painting. And because all three women in the picture — the painter, the real nude and the painted nude — are back views, all three seem to rhyme with one another and to form a conspiratorial sisterhood. Here, then, is a female riposte to many millennia of Old Master ogling. Something about the colour scheme, the strong contrasts of russet and black, the creamy-white nude, the multidirectional glances, brought Velaz­quez’s Rokeby Venus particularly to mind.

Having got all this off her chest, Knight seems immediately to lose her sense of purpose and begins jumping about annoyingly between styles and subjects. In Cornwall, where she moved in 1913, she found herself exiled from contem­porary aesthetics and tried her hand belatedly at Cornish impressionism, with wretched results. Started in 1916 and finished in 1933, the large family group of Lamorna Birch and His Daughters, standing by a Cornish stream, is a pictorial ­disaster. She couldn’t do ­impressionist brushstrokes. She couldn’t do convincing landscapes. She couldn’t do big compositions. She couldn’t do imaginative leaps. Yet in this awful painting, she attempts all of them.

What she could, and does, do is paint beautiful half-length ­portraits, ­particularly of female sitters. Knight had a nose for an interesting female face, and when Diaghilev’s Ballets Russes arrived in London in 1918, she talked herself into the company’s dressing room and began tackling its dancers. To paint these exotic Russian beauties, she abandoned the farmyard impressionism of her ­Cornish years and adopted instead a smooth and streamlined style that seemed to share many of the impulses of art deco.

It didn’t last. After Diaghilev’s troupe left town, Knight turned her attention to circus performers instead, and began painting clowns. It is, of course, an unshakeable rule of art that there is no such thing as a forgivable clown. All clowns in art suffer from the same ghastly shortcoming: an excess of sentimentality. Knight’s are worse than most.

This fixation she seems to have developed with the world’s most obvious ­outsiders led her next to gypsies, whose caravans she followed around in a ­battered Rolls-Royce that acted as her ­studio. Confronted by gypsies and their erratic timetables, her technique was forced to loosen up again, and this time she pulls off some convincing unions of impressionist brushstrokes and weathered faces. I particularly admired the fierce Gilderoy Smith, a wild-eyed gypsy survivor whose battered features look as if they have been lashed to a mast in a storm for the whole of his lifetime. Lucian Freud himself might have been proud of such raw realism.

So the gypsies are good. But suddenly she’s bad again. If there is one place where realism must always fail, it is in the depiction of war. It is no accident that the finest British war art — Paul Nash’s Totes Meer, Henry Moore’s Underground shelter drawings — is stylistically adventurous. When you treat war realistically, you end up with magazine illustrations, which is effectively what Knight produced ­during her spell as an official war artist.

Until, that is, they sent her to Nuremberg in 1946, to record the infamous Nazi trials, and she returned with a horrible slab of excrement-coloured symbolism, in which rows of faceless interrogators ­metamorphose doomily into the bombed-out cityscape of Nuremberg. I’ve been trying to think of a worse war picture, and can’t. Fortunately, after the war, she returned to painting the elegant half-lengths of women that are her forte.

Deciding upon Knight’s final worth is, therefore, a complex task. Temperamentally, she was unstoppable, one of those impressive English battle-axes who traverse Tibet on a yak. Artistically, she was a gadfly, skipping between styles with a lack of endurance that becomes ­annoying.