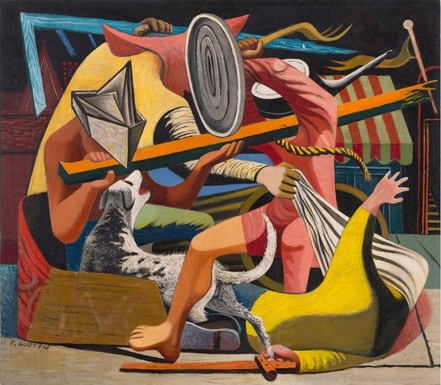 The title of the new show at the Royal Academy — Mexico: A Revolution in Art — has a word in it that is as spicy as a bowl of jalapeño peppers, as prickly as a saguaro cactus, as heady as a big mouthful of tequila. I’m thinking, of course, of the word “art”. You hear that word and you want to run up and down Piccadilly ­yelling “caramba!”, don’t you? The word “revolution” holds plenty of promise too. And “Mexico” isn’t exactly lacking in excitement. Put them together and you have an event that ought to have your pulse dancing to the cucaracha.

Alas, having had the excellent idea of devoting an exhibition to the art produced in Mexico between 1910 and 1940, the RA has chickened out by squeezing the resulting display into its low-slung upper galleries, where it sits looking absurdly cramped: a tsunami in a jam jar. If you want to see the world record being broken for the smallest ever showing of Frida Kahlo’s art, it happens here. This brutal reduction is more than a shame. Frankly, it’s an insult. When a culture has achieved as much artistically as Mexico did in these heady years of revolution, cramming the results into a Mini Cooper like this constitutes an act of misrepresentation.

The castration commences with a particularly short attempt to sum up everything that went on in the years 1910-20, when the heroic Francisco Madero led a popular uprising against the wicked Porfirio Diaz. The Mexican Revolution was as photogenic as it was fierce. With their exclamatory moustaches, their ubiquitous sombreros, their ­dramatic ammunition belts slung casually across their chests, the fighters of the revolution looked as if they had been dressed for the part by the costume department at Warner Bros. The photo here of four Zapatistas sitting on the front of a train with their rifles cocked, taken by a visiting German, Hugo Brehme, looks more like a movie still than most movie stills.

To understand how and why this blurring occurred between the real revolution and its cinematic echoes, I urge you to read Filming Pancho Villa: How ­Hollywood Shaped the Mexican Revolution, by Margarita de ­Orellana. It tells how Villa became Hollywood’s first Mexican superstar when he signed an exclusive contract with an early Hollywood studio, the Mutual Film Corporation, to keep other film ­companies from his battlefields, to fight in daylight whenever possible and to restage any ­battles for which the footage was short. With Los Angeles a few hours across the border, the Mexican Revolution unfolded on Hollywood’s doorstep and duly became the first media war.

Of course, it isn’t just the birth of the western we are watching here. Another of the staggering truths about the Mexican Revolution is that it killed a million people. One thing the opening display does achieve is a sense of how cheap life was in Mexico: how casually death roamed the land. A chilling set of postcards produced for the tourist market by a visiting American, Walter H Horne, shows a firing squad in action. Here are three people being shot. There are their corpses, seeping blood into the sand.

These spooky postcards are so strongly reminiscent of Goya’s famous painting The Third of May 1808 that I found myself doubting their veracity. Are they fake? Were they modelled on the painting? Later in the display, who should pop up taking more pictures of dead people in Mexico but the dubious Robert Capa, whose pictures of the Spanish Civil War have been so vigorously questioned. Thus the exhibition seems to be making two contradictory points: that death in Mexico was and is absurdly cheap; that you should never trust a Mexican death.

When I complain that the show is too small, I do not mean it is badly thought through. It isn’t. The curator, Adrian Locke, crams a lot into the Ryanair ­baggage space allotted to him. His decision to divide the display between photography and painting is particularly fruitful. Not only was Mexico close to Hollywood, it was also excellently positioned for a quick nip across the border by an impressive array of gringo photographers.

Paul Strand, Edward Weston and Henri Cartier-Bresson came and clicked away merrily in a land whose only real rival when it comes to being photogenic is perhaps India. Photographers in Mexico don’t need to seek out surreal sights: the surreal sights are everywhere. Cartier-Bresson photographs some prostitutes in Mexico City popping out of small openings cut in their doorways like inquisitive marmots. The brilliant Manuel Alvarez Bravo looks up at a gothic ­window and sees two Mexican ragamuffins dressed as Arthur and Guinevere. Apart from Bravo, the most rousing of the photographers is Tina Modotti, who arrived in Mexico in 1923 and whose dramatic angles and dynamic croppings seem so perfectly in tune with the rhythms of the revolution.

So photography comes out well. But painting doesn’t. There simply isn’t enough of it to tell a story. Francisco Goitia’s chilling 1914 painting of human skeletons strung up on a cactus warns powerfully of the revolution’s brutality, but is followed immediately by Saturnino Herran’s smouldering Woman from Tehuantepec, staring out at us from beneath her huge white mantilla with a look that could ignite a gringo at a thousand yards. Thus, two fascinating paintings, entirely contradictory in tone, have been tasked with summarising a decade of conflict.

It gets worse. Anyone seeking to celebrate the art of the ­Mexican Revolution faces the intractable problem that the greatest pictorial achievements of the period are the suites of revolutionary murals painted onto the walls of Mexico City by Rivera, Siqueiros, Orozco. Obviously, these cannot be moved. But the one Rivera included here, of a dance in Tehuantepec, is so dreamily beautiful, it seems off subject. As for Kahlo’s ­concluding self-portrait on a box — most Mexican stamps are bigger than that. Only in Siqueiros’s stern portrait of Zapata, visualised as a stony-faced Easter Island head, does some echo of the revolution’s heroic mood survive.

The show is more successful introducing us to the interesting cluster of artistic foreigners attracted to Mexico by all the revolutionary promise. Edward Burra manages to evoke the worrying darkness of Mexican belief with a spooky church interior from 1938. The great American abstractionist Josef Albers gives us a sequence of sloping rectangles inspired by the dramatic duels that light fights with shade in the middle of a Mexican afternoon. All this is lovely. All this is titbits.