Waldemar on exhibitions of Yayoi Kusama and Lisa Yuskavage. 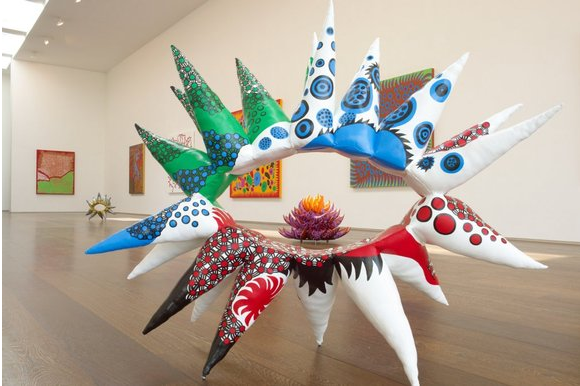 Two “older” women ­artists have shows in ­London. One was born in 1929, so she actually falls into the “ancient” category. The other was born in 1962, so she is merely “middle- aged”. The first one, the ancient one, is universally loved, feted, admired and collected. Last year she had a retrospective at Tate Modern, and although I’m not certain of the current auction record for her work, I do know that, in 2008, one of her 1950s abstracts sold for $5.1m. So we are talking here about one of art’s biggest players.

The other one has never had any obvious success that I can recall. Instead, she gets grumbled about. Ever since she ­clambered onto the art stage in the 1990s with her contro­versial and prickly paintings of busty nudes acting out obscure cartoon sex sagas, she has ­separated opinion as conclusively as Moses separated the Red Sea. Lots of people detest her work. A few admire it ­without really knowing what the hell it is about.

I fall into this second cat­e­gory. Or rather, I used to fall into it. Having looked hard and thought hard about her new show at Greengrassi, I am now certain that Lisa Yuskavage is a genuinely interesting and ­pioneering artist. Meanwhile, having looked hard and thought hard about Yayoi Kusama’s new show at Victoria Miro, I am just as certain that she is overfeted, overrated, repetitive and dull.

Kusama’s career began in the 1950s, when she moved from Japan, where she felt repressed, to America, where she felt free. From early childhood she had suffered from hallucinations, and her art has always had a manic quality to it. In New York, she moved swiftly through the gears of modernism and was, at various points, an abstract expressionist, a pop ­artist, a body artist, an organiser of happenings and a minimalist. Her trademark was the polka dot, which she applied furiously to all sorts of surfaces, most notoriously to the bodies of the writhing hippies taking part in her happenings of the 1960s. ­During one such naked orgy she wrote a letter to ­Richard Nixon, offering to have vigorous sex with him if he stopped the Vietnam War. Nixon never replied.

All this, crazy though it sounds, was quintessentially of its time. Kusama was a genuine 1960s pioneer. However, the furious pace of avant-garde Manhattan was too much for her. In 1973 she fled back to Japan, and later checked herself into a psychiatric hospital, where she has resided, voluntarily, ever since. Forgotten throughout the 1970s and 1980s, she was rediscovered in the 1990s, and is now widely appreciated as one of the world’s leading artists. Hence the big Tate retrospective.

That Tate show was also the event that unveiled the bright and jazzy style of painting that dominates her new exhibition at Victoria Miro. Originally, Kusama planned to make 100 such pictures. She has now churned out more than 350. Painted in bright acrylic splashes that still qualify for the fab 1960s tag of “psychedelic”, these pulsing, jumpy, kiddie-coloured pictures were inspired by Aboriginal art and African textiles. On the wall, they look pulsatingly abstract: crazily patterned and manically cheerful. As you step closer, the shapes grow more recognisable and begin falling into familiar Kusama clusters. Profiles. Eyes. Insects. Blobby polka dots. Swimming sperm. All throbbing and shimmering, as if someone is passing an electric current through them.

Scattered about the floor there are also brightly coloured sculptures, lapdog-sized and bristling with protrusions. In the past, Kusama has identified these protrusions as “penises”. She used to sew them out of grubby white cotton and attach them in their hundreds to everyday objects such as chairs. Those sculptures had plenty of sexual spookiness about them, as well as something of the small intestine. The current multicoloured crop feels as cheerful as swaying coral on a barrier reef.

Nowhere in this show is there much sign of Kusama’s trademark madness. Since she started designing handbags for Louis Vuitton, her art seems to have swapped insistent anxiety for catchy patterns. As soon as I walked in, four terrible words skipped into my head: Niki de Saint Phalle. Seasoned art lovers will know exactly what I mean. The French sculptor Niki de Saint Phalle, who littered the entire Mediterranean basin with her brightly coloured mythic outpourings in the 1960s and 1970s, has become a byword for gaudy acrylic art so crashingly cheerful, it makes you want to slit your wrists. Acrylic paints are popular in nurseries because the colours are so instantly bright. They also dry instantly, so you don’t have to pause for thought. Which is why Kusama has managed to churn out so many of these one-dimensional splashings. No more, please.

Kusama may have spent the past 40 years in a psychiatric institution, but when it comes to painting crazy and un­settling pictures, she is no longer a patch on Lisa Yuskavage. I first encountered Yuskavage’s art in the 1990s, and have spent the intervening years trying to decide if it is horrible or brilliant. Only now, after an eerie green encounter at the aptly named Greengrassi gallery, am I finally confident of the latter.

Yuskavage’s pictures usually feature busty Penthouse pin-ups who have lost some clothing, trapped in puzzling predicaments. At Greengrassi — a ­marvellous little gallery tucked in between two south London council estates — the first image you see features a buxom girl in a nightie tied up on a funeral pyre. Behind her, a set of ­shadowy females in headscarves seems to be approaching the fire with gifts. Are we watching a warped Shaker community sacrificing its virgins to the gods? That is what it feels like.

Yuskavage’s odd mix of nudity and landscape seems shocking, but is actually rather traditional. I remember an ­interview in which she cited that bewitching painting by Giorgione, The Tempest, as a powerful influence on her art. The Tempest shows a naked mother and her baby sitting anxiously in a ruined landscape while a storm rages above them and a soldier looks on. Ever since it was painted, 500 years ago in Venice, people have been trying to decipher it — without success. What’s happening? Nobody knows. This is art that has deliberately set out to puzzle the bejesus out of us.

Which is also what Yus­kavage seems to be doing. All the paintings at Greengrassi are set in the same weird rural ­community, where the young girls are tied up and taunted while older women in headscarves circle them menacingly. The resulting moods are ­unmistakably American: Salem whispers; songs of Mormon. Meanwhile, the insistent emerald green of these landscapes and the matching skies above them create an eerie sci-fi effect that seems to set the action simul­taneously in the future and the past. The result is a set of pictures blessed with a toxic beauty. Or is that cursed?