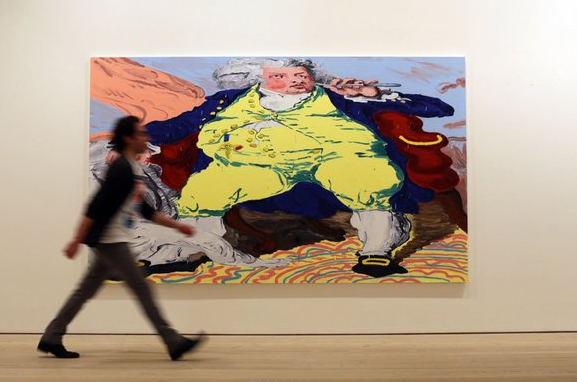 I would like to suggest a new title for Greta Alfaro’s scary video, currently playing at the Saatchi Gallery. It shows a huge flock of squawking ­vultures descending on a richly laden dining table in the ­Spanish mountains and picking it dry with an avalanche of ­savage burps and flaps. Then off they fly again.

The video’s title, In Ictu Oculi, translates as “In the blink of an eye” and alludes to the shortness of human existence. It’s an idea that was particularly popular in the 17th century, the heyday of the vanitas still life: one minute you’re there, the next you’re not. To me, however, the film seems to foreground the behaviour of the vultures, rather than their iconographic meaning. When it comes to gobbling, gorging, gauging and regurgitating, ­nothing compares to a flock of hungry vultures. Which is why my new title for Alfaro’s video would be: The Artworld.

It reminded me of the opening morning at the Frieze Art Fair, although that may be a mite too specific. We are dealing here with a bigger horror. The other day, at the ICA, they held a debate whose title was The End of the Artworld? For some time now, various Cassandras, including me, have been lamenting the artworld’s growing squalor: the commercialisation, the art fairs, the mega-dealers, the grubby nouveau-riche collectors. Amazingly, even Charles Saatchi himself has a pop at them all in his book Be the Worst You Can Be: “Being an art buyer these days is comprehensively and indisputably vulgar. It is the sport of the Eurotrashy, Hedgefundy, Hamptonites; of trendy Oligarchs and Oiligarchs; and of art dealers with masturbatory levels of self-regard,” he sizzles. He’s right. But since he started it all, it’s disconcerting to read such angry oozing from the king boil himself.

That said, Saatchi remains a different class of boil. Where the others follow, he has always led. And it’s fair to say that he maintains a level of curiosity and involvement that shames all the others. The show in which Alfaro’s vulture work is playing is a selection of new work by young British artists, none of whom is familiar to me. These are not artists favoured by the taste Führers at the Tate. These are not reheated Goldsmiths doppelgängers. These are not the usual biennale types. These are genuinely unfamiliar talents, searched out and given a platform by the only significant independent force currently operating in the British artworld. Thank God for Charles Saatchi, squawk I.

Not that the new selection is particularly impressive. Not even Saatchi, with all his energetic digging and scouring, can find oil where there isn’t any. The best recent shows at his ­gallery have showcased the art of other cultures, not our own. Witness the compelling Russian exhibition, still showing downstairs at the Saatchi Gallery, which will have you walking about with your legs crossed, so disturbing are its sights. British art, by comparison, seems thoroughly becalmed. Although the show does make one interesting observation: foreign is the new British! Of the 17 artists included here, seven were born elsewhere.

Alfaro is from Pamplona, in Spain. Saatchi doesn’t usually collect videos — he’s mainly a paintings and sculptures man. But the vultures film is certainly grabby. My guess is that it was inspired by a dark, disturbing 17th-century still life by Valdes Leal, which hangs in the chapel of the Charity Hospital in Seville. It shows a scary human skeleton clambering over a table piled high with signs of earthly success — jewellery, maps, Rubens drawings. In the darkness above these luxuries, the Latin-speaking skeleton has written the warning In Ictu Oculi — in the blink of an eye. By swapping the skeleton for a mob of vultures, Alfaro makes the warning less cerebral, more urgent.

Tereza Zelenkova is from Ostrava, in the Czech Republic. She makes silver gelatine prints of spooky photographic images. One of her pictures shows a dozen crocodiles writhing together in a slithery knot. Another shows a woman with hair so long that it hides her completely and falls to her shoes. Crocodiles and hair? We are at the Marquis de Sade’s end of the art spectrum.

While darkness is the predominant quality displayed by the Johnny Foreigners in the show, the homegrown British contributors prefer drab humour and puerility. Dominic from Luton creates images that rub our noses in Britain’s armpits. I presume that his chosen art name — the most ridiculous I have encountered for some time — is a deliberately down-at-heel version of those posh names Italian artists of the Renaissance used to go by, such as Leonardo da Vinci or Michelangelo da Caravaggio. If Leonardo can be from Vinci, then Dominic can be from Luton. My Dad’s Pants shows a radiator hung with a scraggy selection of his father’s Y-fronts, while the accidentally timely Dominic from Luton as Margaret Thatcher features the artist in a Thatcher costume, going round what appears to be a deserted hospital in a wheelchair.

Bad taste and irreverence have always appealed to Saatchi. Throughout his collecting career he has displayed a special weakness for art with the presence of a stink bomb. It’s something ­British art is particularly good at. Amanda Doran paints the kind of slapdash expressionist imagery of which it is traditionally said: “My five-year-old could do better.” Her two tattooed blobs, who seem to be naval types, judging by the anchors and sailing ships tattooed on their bodies, have been given the hugely childish title The Semen.

Wendy Mayer is a sculptor descended visibly from the Chapman brothers. She makes spooky figurettes of andro-gynous children attacking their parents with crochet needles. Charlie Billingham, a bad painter who projects his badness back onto the 18th century, has reworked Gillray’s famous image of the gluttonous Prince of Wales picking his teeth with a dining fork. In Billingham’s ­version, not only has the ori­ginal Gillray figure been blown up enormously in size, it has been stretched sideways, as if reformatted for widescreen.

Thus, a moderately interesting show proves two things: British art is as vulgar as it ever was; and foreigners make the best Brits.