Gaudy, sexy and compelling, the British Museum’s Pompeii show is a great success. 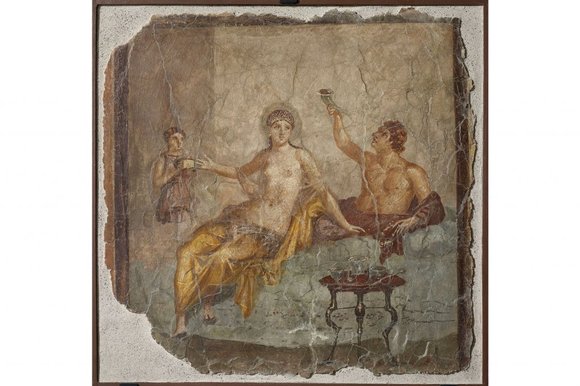 The digging up of Herculaneum and Pompeii in the middle of the 18th century was an event of remarkable significance: a history-changer. I’m not just talking about art. When the Fates chose to preserve Pompeii so fully and so instructively, they displayed that outrageous favouritism towards the classical world that has characterised so much of their civilisational input. Imagine if it had been the Huns or the Vandals about whom we now knew as much as we know about the Pompeiian Romans.

It’s probably a step too far to claim that the great rediscovery inspired the French Revolution, but, artistically speaking, there is no question that the creative style associated so intimately with Madame La Guillotine — neoclassicism — would never have happened if Pompeii hadn’t been dug up. David would never have painted his heroic Oath of the Horatii. Alluring French beauties in diaphanous robes would never have stretched out on austere Roman day beds, pretending to be the Empress Livia. And don’t even get me started on America, and the architecture of Washington DC.

The British Museum knows all this. But, in Neil MacGregor, it has a director whose first instinct is to speak to Mr and Mrs Smith. Unlike most museum directors, MacGregor turns down most gongs he’s offered. Not for him the world-view that places law courts, temples, forums and senates at the centre of a city. For MacGregor, the centre of a city will always be its people. Which is why Life and Death in Pompeii and Hercu­laneum may be the most representative exhibition he has ever mounted.

From commencement to conclusion, this is a display that privileges ordinary life. The show’s opening sight points us firmly in that direction. We see a pair of lovers, a coffee table and a dead dog. The lovers appear in one of those astonishingly well-preserved frescoes that were discovered in Pompeii. It features a ­couple on a sofa, enjoying a night in. He’s drinking wine. She’s been nibbling things from the array of pots arranged on a table. Both of them have their tops off, so we know where this is heading. Most readers of this article will have been there and done this. Indeed, most of us probably have a coffee table next to our sofa not unlike the one seen here, preserved mira­culously at Herculaneum, and positioned so handily for the peanut bowl.

Below the fresco, on the floor of the display, a ­preserved dog seems to be ­licking its privates in the frank and acrobatic manner that dogs have always favoured, Roman or not. In fact, we are watching its tragic last thrashings, frozen and immortalised by the great explosion. Life and death. Wine and sex. Sofas and coffee tables. Welcome not just to Herculaneum and Pompeii, but to everybody’s world.

The exhibition ahead is full of com­pelling storylines. I had always understood the volcanic moment that preserved Pompeii and Herculaneum in AD79 as a huge explosion that covered both cities in enormous quantities of ash. The reality was much more brutal. At Herculaneum, the burning hailstones of fire falling out of the sky were so hot they carbonised all the wood, which is why that unbelievable coffee table has survived. Later on, the same spooky process gives us a fully intact cradle in which a baby was rocking when Vesuvius erupted.

Pompeii was destroyed more gradually, by a process closer to blanching. The temperature of the gas and falling ash was ­sufficient to roast the people and the dogs, but not to dematerialise them. What we’re actually looking at in the embalmed hound, or the terrified family of five clutching each other for support in the show’s poignant final sight, is a ­plaster cast of the “voids” left behind in the encircling ash once the bodies inside had rotted away. 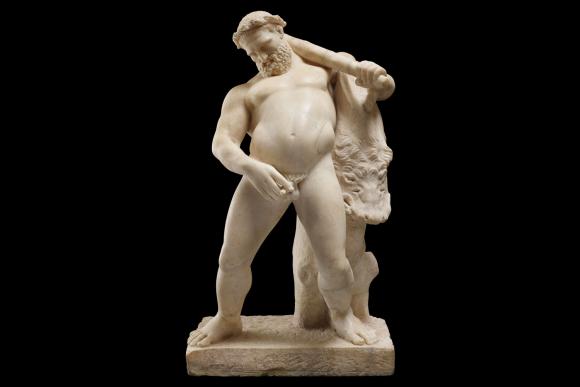 A statue of Hercules (Soprintendenza Speciale per i Beni Archeologici di Napoli e Pompei/British Museum)At the centre of the display is a re-creation of the famous House of the Tragic Poet in Pompeii, one of the few villas modern visitors are allowed to enter if they survive that hugely uncomfortable tramp round the ruins. Each of its ­different rooms prompts a ­different set of objects and explanations. Thus, the vestibule, the atrium, the ­gardens, the kitchen and, of course, the bedrooms get a section to themselves. ­Interestingly, the facade of the house was originally busy with shops and taverns, as were most of the facades in the street. In ancient Pompeii, there was no stigma attached to living above the shop. Trade was a sign of success, not of lowliness.

Running the shops and taverns were the slaves, who outnumbered the free citizens, and whose hard work and initiative seemed to have led surprisingly often to enrichment and freedom. The rich banker with the wart on his face who greets us from a herm in the atrium is a former slave. His monument was put up by another. And the grateful inscription was added by a third.

The show has clearly set out to challenge a clutch of perceptions about Roman life. Much is made of the role and power of women in Pompeii. The largest structure in the forum, the so-called Building of Eumachia, was probably a slave market erected by the lofty Eumachia, one of the richest people in the city, whose life-sized statue, carved in marble, is one of this show’s artistic highlights. As with all classical statuary, Eumachia’s elegant full-length figure would once have been brightly coloured, but most of the paint has fallen off, leaving only a ­glorious head of red hair. How different our image of classical art would be if all that paint in all those colours had not fallen off to reveal all that thoroughly misrepresentative white marble.

Pompeii was gaudy and sexy, if not in the modern way. Another of the show’s tasks is to “denaughtify” the throbbing phalluses and energetic sex scenes that pop up here with startling frequency. It wasn’t just the walls of Pompeii’s noto­rious brothels that displayed scenes of lovemaking. They were everywhere. See the hair-raising sculpture of a satyr pleasuring a reclining goat. That was a garden ornament. And the couple making a rear entrance while a slave looks on in the House of Lucius Caecilius Iucundus were also in a garden, not a bedroom.

In taverns, giant phalluses hung above the wine jars to bring their owners luck, and at night, impressively excited lingam lamps were lit to ward off evil spirits. Not only were the Romans comfortable with sex, they had no difficulty recognising its centrality in the cycle of life celebrated so happily in so much of their art. If only we were as enlightened.