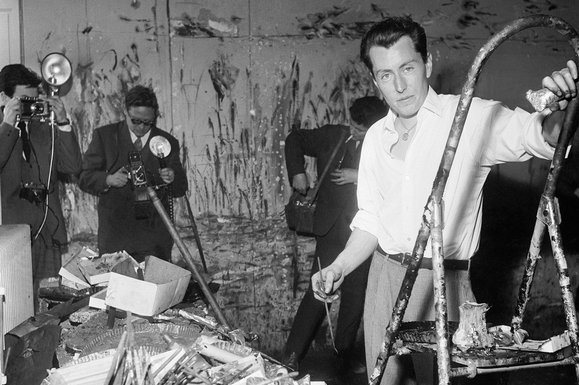 Nicholas Foulkes has written about James Bond, Bentleys, trench coats and the Battle of Waterloo. He is, therefore, excellently qualified to write about the French painter Bernard Buffet (1928-99). Only someone with as little evident experience of art as Foulkes would have wished to tackle an artist as widely condemned as Buffet.

Foulkes knows this, and admits it in his introduction. Once, long ago, while strolling among the cigar shops of St James’s he chanced upon a typically glum Buffet still life in a gallery window — an ashtray, a coffee pot, a gun — and wishes he’d bought it. Ever since, the artist’s name has flickered at the back of his imagination. Now, with commercial interest in Buffet seemingly reviving, it feels right to rebuild his reputation.

It is a heck of a challenge. Few presences in art have experienced as complete a fall from favour as Buffet. With its arachnid outlines and that giant “look-at-me” signature, his art is grimly unmistakable. He was the Jack Vettriano of his times, a briefly popular commercial picture-machine whose mass-produced bleaknesses created illusions of depth in those for whom depth and misery are synonymous. So celebrated was he that in 1956 The New York Times listed him alongside Brigitte Bardot, Roger Vadim, Françoise Sagan and Yves Saint Laurent as one of “France’s Fabulous Young Five”, the gang of sexy Gallic creatives leading a new French takeover of le monde de la culture.

He was also, it says here, the first “modern mega-artist”: the first presence in modern art whose fame breached the banks of culture. Before Koons, before Hirst, before Warhol, insists Foulkes, there was Buffet. “Mega-artist” is an ugly ranking. But were it to exist, scores of others could claim to have reached it before Buffet, Picasso being the most obvious example. Thus the book’s ambition to position him as a cultural pioneer fails comprehensively. But it matters not a jot, because the thing Foulkes is really good at, the thing with which this book is happily stuffed, is snappy storytelling.

The other BB was born into bleakness in 1928. His father ran a mirror factory and a mistress, while his mother brought up the boys. They lived in a second-floor apartment in Batignolles, the 17th arrondissement of Paris, just next to Montmartre. By nature, he was a spotty miserabilist: what these days we’d call an emo. Fortunately, his schooldays coincided with the occupation of Paris where his precocious misery could blend with the background. At school, he was bad at everything except, of course, drawing. So adept was he at this that in 1944, at the age of 16, he managed to gain a place at the Ecole des Beaux-Arts, the world’s most prestigious art school.

Surrounded by shortages and Germans, he settled on a wartime colour scheme of grey, black and brown, and spent the next 50 years repeating it. In 1948, he won the French Critics’ prize. In 1950, the newspapers began comparing him to Picasso. By 1956, aged 28, he’d bought a Rolls-Royce Silver Wraith to park outside his chateau, and was living in an expensive ménage à deux with Pierre Bergé, the soon-to-be lover of Yves Saint Laurent.

It was an extraordinary rise. The melodramatic misery of his art struck an immediate chord in post-war France, and for the next decade or so Buffet could do no wrong. In 1956, a typical painting by him would cost £5,000. The average price for a house at the time was £2,000.

These years of excess provide the book with its most entertaining stretches. The Hollywood director Jean Negulesco (How to Marry a Millionaire; Three Coins in the Fountain) was an early admirer. The rest of Hollywood quickly followed — Hitchcock, Kirk Douglas, Bogart and Bacall. Yul Brynner hired him to teach him drawing. Edward G Robinson blundered around Provence trying to find him.

Buffet’s elastic sexuality takes a lot of keeping up with, too. In 1948 he married his first wife, and displayed his affection for her by spitting orange pips in her face. By 1950 he had met and moved in with Bergé, who begins emerging as the book’s baddie. Foulkes blames him for the ostentation that so harmed Buffet’s reputation (how can a man who paints this much misery drive a car as expensive as that Rolls?), and the speed with which Buffet is replaced by Saint Laurent at the end of their 10-year relationship is ruthless.

Dumped by Bergé, Buffet switched inclinations. At his 30th birthday party, after the bullfighting, just before the mass gang bang, he jumped into the pool with a beautiful actress, Annabel Schwob, and they remained together for the rest of his life. At the end of his story, it was Annabel who found him with a plastic bag taped round his head as he gave himself a suitably melodramatic ending.

Foulkes delights in relating all this. Among the chateaux and the society hostesses he is in his element. Where the book moves onto less secure ground is in understanding the years of decline. Precisely because Buffet was a second-rate dauber, with no second or third act in him, he never turned into anything else. All the way through his career, his unmistakable manner did 90% of the work. And as the miseries of the war years faded from the memory so, too, did the appeal of this repetitive melodrama. Unfortunately, we’re only halfway through the book. For all Foulkes’s manly efforts to find a punchy story line in Buffet’s extended ending, the tune turns into a dirge. With entire chapters given over to the opening of a Buffet Museum in Japan, we know we are in the presence of a writer desperate for content.

It remains a heroic effort, packed with memorable cameos. I loved the fashionable wife of the French culture minister who styled herself Marilyn Malraux; and the brief artistic appearance from France’s leading stripper, Rita Renoir. All in all, better than Buffet deserves.