Tate Britain is using scents and salty chocolate to lure visitors. What about the art? 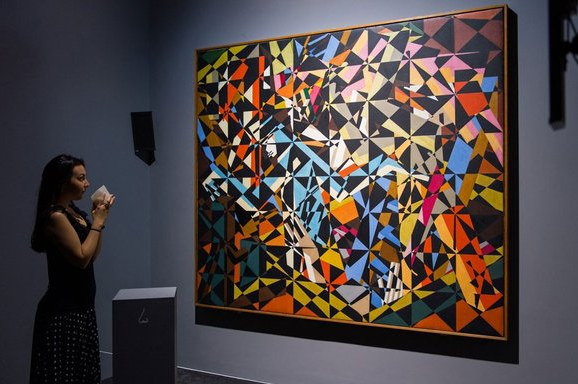 Looking back on the things I have had to do this summer to keep you abreast of what’s been happening in our galleries, I feel as if I haven’t actually seen much art. Here’s a short recap. At Carsten Höller’s interactive show at the Hayward, I slid down a big slide. At Soundscapes, in the National Gallery, I listened to bouncy music composed by a chap called Jamie xx. At Dismaland, in Weston-super-Mare, an alternative theme park created by the street artist Banksy, I threw table-tennis balls at an anvil. Now, at Tate Britain, I’ve been eating salty chocolate and smelling furniture polish in something called the Tate Sensorium. None of the above is what I signed up for when I became an art critic.

To understand what is going on here, reader, would you mind taking part in a questionnaire like the one they ask you to fill in at the end of the Tate Sensorium experience? Below, I have listed some of the things art used to do. I want you to read down the list and draw a line through all the roles that no longer apply:
1) It memorialised the dead by remembering what they looked like when they were alive.
2) It visualised things that would otherwise have been unimaginable, such as gods.
3) It celebrated the power and beauty of nature by showing it at its best or most memorable.
4) It did what porn does by showing beautiful people in various stages of undress pretending to be mythological beings.
5) It allowed artists to express their deepest feelings by finding a communicative visual form for them.
That’s the list. It’s by no means exhaustive, but it covers the main areas. How did you do?

By my reckoning, you should have put a line through all of them. There is not a task listed above that art today is still required to perform. If you want your face immortalised, you go to a photographer. If you love nature, you watch David Attenborough. If you want pornography, you switch on the internet. So what is it that art is called on to do?

Well, that’s where eating chocolates and sliding down slides comes in. Art’s main task today is to be popular. Whatever it takes, however it’s done, it needs to get punters through the door. And that’s it.

Like so many contemporary ills, it’s a situation that can be traced back to the Blair years, and specifically to the opening of Tate Modern in 2000: a new gallery for a new millennium. Before it opened, contemporary art was a rather rarefied taste. Yes, there was the annual fuss about the Turner prize, and Charles Saatchi’s antics were already front-page news, but none of that infamy had translated yet into proper, countable popularity. It wasn’t until Tate Modern arrived at Bankside and began turning art into an inventive new form of contemporary amusement that all those mums with prams began careering down the ramp in such impressive numbers.

There is, of course, nothing wrong with popularity. If lots of people want to see you, that’s a good thing. The problems start when the artistic experience is distorted and cheapened to keep up visitor numbers. Michelangelo didn’t paint the Sistine ceiling so people could eat chocolates in front of it. Van Gogh didn’t shoot himself at the age of 37 because he was disappointed at the progress of a slide ride. Rembrandt didn’t record his own remorseless ageing because selfies are fun. They were artists who made art for profound civilisational reasons. To memorialise, to imagine, to lament.

Of the summer shows listed at the top of this article, only Banksy’s fake amusement park is happening for serious artistic reasons. Say what you want about Banksy’s politics, but by creating Dismaland, he’s continuing an artistic tradition that goes back to Hogarth: using art to satirise the state of modern Britain. His work may not be to everyone’s taste, but it has a genuine artistic purpose.

Elsewhere this summer, that has not been the case. At events like Soundscapes, at the National Gallery, or the Tate Sensorium, we are not being addressed by the artists themselves, but by the new breed of inbetweenies created specifically to lure punters through the door — curators. You know when you go abroad and, as you pass a row of restaurants in the evening, you are buttonholed by pushy waiters determined to get you into their establishment? That’s the job of the contemporary curator.

At the Tate Sensorium, they’re trying to lure you in with chocolates. Created by a curatorial squadron called Flying Object — “a creative studio that helps brands, media companies and cultural organisations better engage their audience”— the show’s ambition is to trigger responses to a selection of artworks, not just from your eyes, but from all the senses. As it says in the press release: “Galleries are overwhelmingly visual. But people are not.” Or, as it says on the Flying Objects website: “Let’s make stuff people actually like.” A spoonful of sugar is helping the medicine go down.

Inside, you are treated as if you are taking part in a scientific experiment. A cutie in a Tate uniform explains the procedures and you are given a wristband that measures your heart rate as you experience the show. Each of the four chosen paintings — a pop interior by Richard Hamilton; a vorticist ship scene by David Bomberg; a cosmic splodge by John Latham; a figure in a landscape by Francis Bacon — is accompanied by a different selection of sensual stimuli.

For the Hamilton, you hear the stilettos of the woman in the picture pacing across the room and smell the Pledge with which the furniture has been polished. For the Bacon, aromas of “an animalistic horse-like scent” drift across the space to remind you of the picture’s setting in Hyde Park, and you eat the salty chocolate “to bring out the painting’s dark nature”.

It’s quite good fun. And even now, a couple of days later, I can still remember the taste of that salty chocolate. What I can’t remember is the Bacon painting. Weirdly, it’s become a blank. Instead of adding to the visual experience, the Tate Sensorium has managed somehow to obliterate it and replace it with all the other guff.