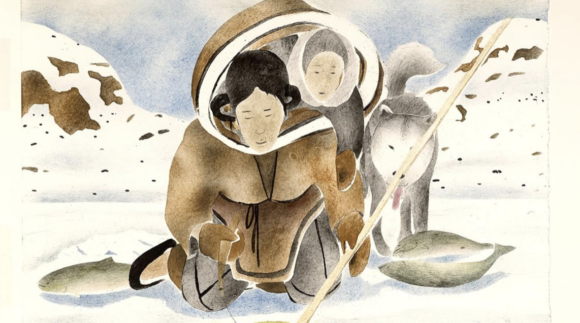 The Arctic has always been cold, but only recently has it become cool. I first noticed the arrival of the region on the international art stage in 2017, when the Inuit artist Kananginak Pootoogook popped up at the Venice Biennale with a set of charming self-portraits in which he remembered everyday life in the Arctic Circle. Watch the telly. Fix the snowmobile. Draw a wolf.

Last year at the Venice Biennale, Arctic creativity took its biggest step into the limelight when the Canadians handed over their entire pavilion to an Inuit collective called Isuma. The main work in their show was a film by Zacharias Kunuk, in which an Inuit elder meets a character called Boss, a Canadian government official sent north to organise the elder’s relocation. Boss was played by Kim Bodnia, whom you may remember from The Bridge or, more recently, as the flexible Russian baddie in Killing Eve. “Venice in Furs” was the headline in Apollo magazine. 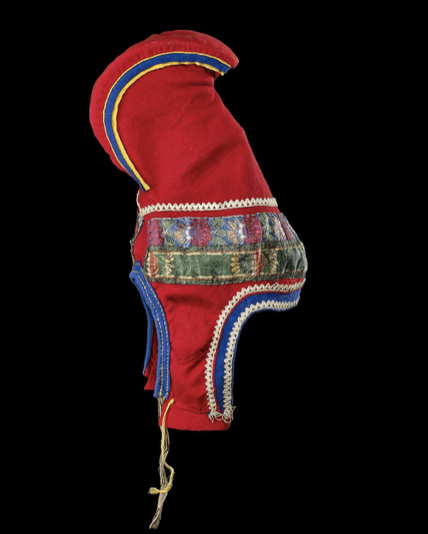 What is Arctic? Well, mostly, it’s a piece of anthropological propaganda, aimed at western society, whose aim is to chastise us for the global warming that is melting the polar ice caps. As soon as you enter, a towering map on the wall makes clear the extent of the damage. The Arctic is being warmed twice as quickly as anywhere else. At this rate, in 80 years’ time, there won’t be any ice left.

So what are we to do? Obviously we need urgently to tackle global warming. But, a mite less obviously, we need also to learn from the indigenous peoples who live in the Arctic Circle and who are more practised than us at managing scarce resources.

Arctic presents the Inuits of Canada, the Gwich’in of Alaska, the Sami of Lapland, and the Chukchi and the Evenki of Siberia as exemplars of a caring and efficient society that makes use of every available scrap of nature and can show the rest of us how to survive with less in the bleak future ahead.

Most of us, I suspect, are not aware of the rich array of ethnic groupings that inhabit the Arctic. Most of us stop with Inuits and Sami. So the show kicks off with a spectacular fashion display in which the various Arctic tribes are represented by their costumes of choice: their Sunday best.

The Nenets of the Yamal Peninsula rely mostly on reindeer herding. Their winter coats, mittens and boots are made from late autumn reindeer hide, when the fur is at its thickest and warmest. The abstracted decoration sewn beautifully into the fur represents antlers.

The Inuit parka, with all the tails hanging off it, is made from 100 ground squirrels, chosen for their lightness and durability. The boots are sealskin. And that delightfully cuddly kiddie’s onesie, a tear-jerker of an outfit straight out of Nanook of the North, combines muskrat with beaver and otter. Note also the fur trim on the hood. It’s fashioned out of wolverine fur, which does not absorb moisture, so it cannot freeze against the face.

The costumes are the best things here. They feature fabulous care and ingenuity in their construction, underpinned by a profound knowledge of every aspect of the Arctic fauna. Parkas are made of strips of seal gut because seal gut grows more flexible as it gets colder.

In a display studded with ghostly Arctic outfits, the most spectacular is a sealskin onesie from Greenland used for hunting whales. Swaddled inside one of these, 19th-century Greenlanders would jump from their boats on to the backs of sleeping whales and harpoon them! The all-enveloping onesies could be blown up with air to help with floatation and to keep the hunter warm as he wrestled with Moby-Dick.

Another important aspect of this focus on costume is that it locates Arctic creativity in a domestic realm that is chiefly the preserve of women. It’s a point stressed regularly in the captions.

It’s the women, with their seamstress skills, who turn the feet of eider ducks into dinky money pouches. It’s the women who create gorgeous travelling luggage out of salmon skins.

Popping our heads outside the show for a moment — like curious seals peeping out from an ice hole! — we can recognise a point being made recurrently in the contemporary art world: that the domestic nature of women’s art in the past has led to its unfairly being ignored. Feminine creativity may often express itself in a domestic situation, but that doesn’t lessen its heft or range.

With much of the display taken up with photographs and captions detailing this careful anthropology, there’s a shortage, perhaps, of obvious and stirring artworks. Scattered among the snow pics are delicate Siberian carvings made of mammoth tusk. And a selection of prints by contemporary Arctic artists that feel noticeably tourist-friendly. However, a “walrus head” by Lawrence James Beck, made from an old tyre and some metal hubcaps — called Punk Walrus Spirit — is suddenly ugly and aggressive, and seems to fight against the grain of the show.

Two other things stick in the craw. One is the presentation of Arctic societies on a saccharine level that feels as if it learnt much of its anthropology from watching Frozen. The show badly needs some Annie Pootoogook. The unpicturesque has been yanked out of it, like the heart of a bearded seal, butchered for supper.

The other annoyance is the transparent cheek displayed by the British Museum in seeking so obviously to come across as a defender of indigenous rights and a caring anthropology. The same museum that keeps a collection of shrunken Maori heads in its basement, that refuses to return the Benin Bronzes to Nigeria, that has plundered the globe for historic artefacts, is trying to rebrand itself.

The best way to do that is not by fully whitewashing Arctic living, but by handing things back to the societies from which they were plucked.