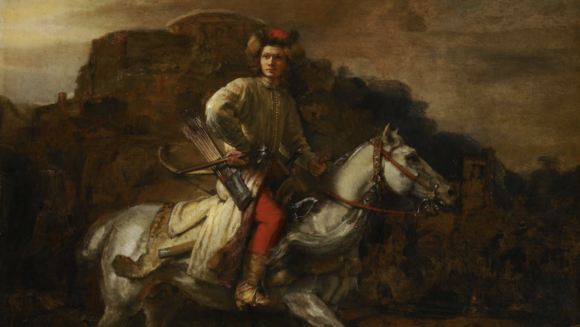 “And I looked, and behold a pale horse: and his name that sat on him was Death, and Hell followed with him” — Revelation 6:8

It was Clint Eastwood’s birthday last week. He was 90. Who would have thought it? He’s still making films, still embarrassing Hollywood with his politics, still sliding all over the road in his definition of an American hero, and still reminding me of Rembrandt. Particularly the latter.

To celebrate his big birthday there were various Clint seasons playing across the ether, and I caught up with some of his westerns. Boy, are they good. The Sergio Leone trilogy may take a large chunk of your life to watch — each film is spectacularly and unnecessarily long — but they feature a feast of close-ups of Clint looking mean, especially The Good, the Bad and the Ugly, where Clint looking mean is the nearest thing to a plotline. The Outlaw Josey Wales, with its fuzzy, biblical motivations, is a door thrown wide open on the American hunger for myth. But the best of them all in terms of its scriptural clout is Pale Rider.

Once again, Clint is a man with no name, though he gets called the Preacher when he rides into town and sets about shooting all the bad guys. To make its message clearer, and to give itself a really good beginning, the film repeats the great line from Revelation about the rider on the pale horse whose name is Death and whom Hell will follow.

Yup, that’s Clint. He’s the Fourth Horseman of the Apocalypse, as predicted by John the Evangelist, the rider who will appear when the Fourth Seal is broken and who will bring ruination into the world. In medieval times, he was thought to prefigure the coming of the plague. In cowboy terms, he’s unfussy about whom he shoots.

But let’s park Clint for a moment and turn to the real subject of this rumination, which is that mysterious painting by Rembrandt that hangs in the Frick Collection in New York and which is known as The Polish Rider. There are many excellent reasons to visit the Frick Collection. For me, this is chief among them. It dates from about 1650, so right in the middle of Rembrandt’s golden patch, when masterpiece after masterpiece poured out of him, each different from the one before.

Rembrandt was not a horse man. This is one of only two he painted. The other one, in the grand equestrian portrait of Frederick Rihel in our own National Gallery, is more of a set piece, a deliberate effort at pictorial aggrandisement, with ambitions to make Rihel appear more of a hero by placing him on a rearing stallion. In reality, he ran an import and export business in Amsterdam.

But The Polish Rider is different. It’s not a portrait, although plenty of scholars have tried to find a name for the handsome warrior riding a white horse through a bleak and parched landscape. Watching Rembrandt scholars try to find a Polish name for the horseman is always good fun — if like me you have come to enjoy the agonies that accompany any Anglo-Saxon search for Polish consonants. But this clearly is not a portrait. The horse and landscape are too important, the handsome face too small. This is a painting with mythic ambitions.

We need to mention that doubts have been cast in the past about Rembrandt’s authorship of the picture. In the 1960s an art historical bulldozer called the Rembrandt Research Project began investigating all of the master’s 900 or so paintings and treating them to a yay-or-nay analysis. It was harsh stuff, with lots of downgrading, followed by lots of teeth gnashing.

The Polish Rider found itself with question marks set against it. However, most serious Rembrandt scholars stayed firm, and in terms of conception, vision, originality, this can be no one else’s creation. There is no other painting like it in the whole of art, let alone in the Dutch 17th century.

Whether it represents a Polish rider is also disputed. Like so many of the costumes in Rembrandt’s oeuvre, the one sported by the lonely horseman is thoroughly ambiguous and can best be described as authentic fantasy from the Rembrandt costume department. It’s sort of Polish. But also sort of Hungarian. With some Cossack thrown in. When the 17th-century European imagination needed to imagine invading horsemen, it turned its thoughts to the direction from which the Huns had arrived. And the Mongols. And, Heaven forbid, the Tartars.

Henry Frick bought the painting in 1910 from Zdzislaw Tarnowski, a fierce Polish politician and nationalist who liked to dress up in a traditional costume that bears a decent resemblance to the one sported here by the lonely rider. Fur hat. Fur coat. Gold chains.

The picture was in Poland by the 18th century, and there it was widely understood to be a representation of — we are about to tiptoe into the dark world of Polish consonants: brace yourselves — a Lisowczycy soldier. The Lisowczycy, otherwise known as the Stracency, which translates as “the lost men”, or perhaps “those without hope”, were light-cavalry irregulars in the Polish-Lithuanian army who terrorised the eastern regions of Central Europe in the first half of the 17th century, the early years of Rembrandt’s career.

The Lisowczycy were skilled horsemen. If you wanted a guy who could shoot a fatal arrow from a galloping horse while dangling from the stirrups, you called in a Lisowczycy. But what made them especially dangerous, and especially infamous, was their method of gathering their rewards. Like the civil war irregulars in The Outlaw Josey Wales, the unpaid Lisowczycy made up their wages with pillage, plunder, sackings and rape. So fiercely did they pursue these grim reckonings in their years of European infamy — “killing even children and dogs” —that they earned themselves the nickname of the Riders of the Apocalypse.

I reckon — my Polish blood tells me — that Rembrandt’s Man Without a Name is a pretend Lisowczycy, cast in a biblical role. Just like Clint in Pale Rider, he’s a Horseman of the Apocalypse, a symbolic presence riding across a barren land on which nothing grows. So it’s a religious picture, but only in that blurry, inventive, golden fashion in which Rembrandt’s religious art was so often painted.

And there’s something else to puzzle about. St John’s Revelation lists four jockeys of doom appearing at the end. Number fouris Clint’s horseman, the Pale Rider. But the first horseman, the beginning of all the troubles, is said to ride a white horse, and he represents conquest, war, pestilence: the whole caboodle. If you’re looking for someone you don’t want to see galloping into your world, it’s the White Rider.