As I queued outside Tesco last week, dutifully maintaining my 6ft distance, mask on, gloves pulled, it occurred to me that I could be doing the same thing outside the National Gallery in London while waiting to see the marvellous Titian exhibition that opened there last month. It was open for a couple of days. […]

As I queued outside Tesco last week, dutifully maintaining my 6ft distance, mask on, gloves pulled, it occurred to me that I could be doing the same thing outside the National Gallery in London while waiting to see the marvellous Titian exhibition that opened there last month. It was open for a couple of days. Took away the breath of the lucky few who saw it. Then it closed.

The description “once-in-a-lifetime opportunity” is bandied about by the press departments of museums, but in the case of this Titian event it was a bald statement of the facts.

In the 1550s, Philip II of Spain commissioned Titian to produce a set of paintings for the royal palaces in Madrid. At the time, Titian was the most famous painter of the Renaissance, the undisputed giant of European art. Philip was his vigorous and determined admirer. And over the next 25 or so years, Titian fulfilled the commission with a spectacular suite of seven paintings that rank among the greatest achievements of the Renaissance.

He called them his poesies, and their principal subject was the love between gods and mortals. In most cases the mortals come off worse, as we invariably do. Nothing like the poesies had been painted before. But no sooner were they delivered than they were dispersed. For five centuries they remained apart. Until this show.

Today, Titian’s masterpieces are scattered across London, Edinburgh, Madrid, Boston, in some of the world’s most prestigious museums. The diplomatic effort involved in organising their arrival at the National Gallery must have taken the needle off the top of the Kissinger scale. They came. They went briefly on show. They closed. But — and this is what counts here — they are still there.

Hanging in an empty room at the National Gallery, right now, are some of the greatest paintings of the Renaissance, brought together for the first time in half a millennium, in an unparalleled treasure trove of art. And they’re just sitting there. With no one looking at them.

Now, you will find no stricter adherer than me to the profound government advice about staying indoors and protecting the NHS. I go for my daily walk at six in the morning. Otherwise, I stay in. I shop only when I must. I glove up. I mask up. I clap on Thursdays. And I cannot turn on the television without crying at the bravery of our lockdown heroes. 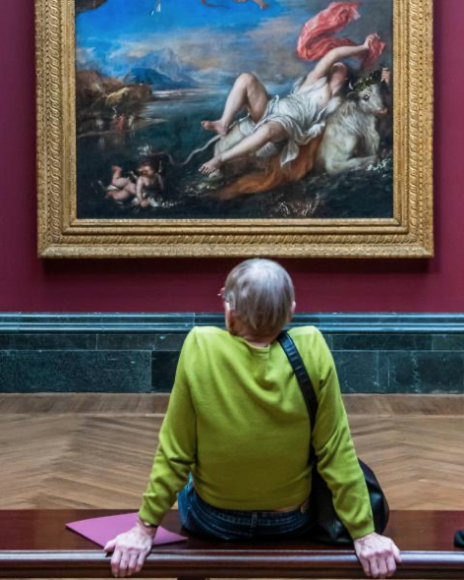 In the case of the Titian show at the National Gallery, we have the whole of an empty Trafalgar Square to wind around. Not that the queues should be long. A carefully maintained internet ticketing system would control the queuing numbers.

Inside, maintaining safe viewer distances would be easier than in a supermarket. You don’t need to touch anything. You don’t carry anything out. You stand in front of a picture. You look at it. You move on. If the numbers are regulated, you can easily keep your distance. And the experience itself will be heightened and improved by the quietude. Art was never made to be looked at in heaving crowds.

True, you have to get there, but the British public has shown itself to be admirably responsible in matters of public access. The travel procedures in place for shoppers and workers could just as easily serve the desperate art-lover.

In the end, the point here is that art is not a frippery, or just a luxury. The entire history of art attests to the fact that it has always been a human necessity. If the grotesque circumstances we are living through have proved anything, it is that we are an inventive, agile, curious species, full of ingenuity and aesthetics. The daily internet feed on which I rely is a veritable cornucopia of quizzes, choirs, draw-ins, dance-ins, mass picture-makings, athletics for the home and suchlike. Inside all of us there’s a Captain Tom — the fundraising 99-year-old war veteran — desperate for creativity.

And it was always thus. If you wind back the human clock to our first efforts at making art, you will see our ancestors mounting incredibly dangerous journeys underground, down many miles of dark tunnel, armed only with flickering torches, dodging bears, snakes and sabre-toothed tigers, to draw something on a cave wall. That is not a luxury. That is a social urgency.

So. Let’s pick out the most important of the art exhibitions that have had to close. Let’s organise a careful ticketing system that controls the numbers queuing for shows and visiting them. Let’s start with the NHS workers, dustmen, bus drivers and delivery people who are keeping us going. Let’s get museum guards back into work with all the protective gear they need. And let art work its historic and life-giving magic on us, again.