One of the good things about Tate Britain’s decision to tour the Turner prize around the country has been the interesting confrontations it has engineered between the location and the art. The first such effort, taking it to Londonderry in 2013, was an inspired piece of cultural diplomacy. Contemporary art and contemporary Derry may not […] 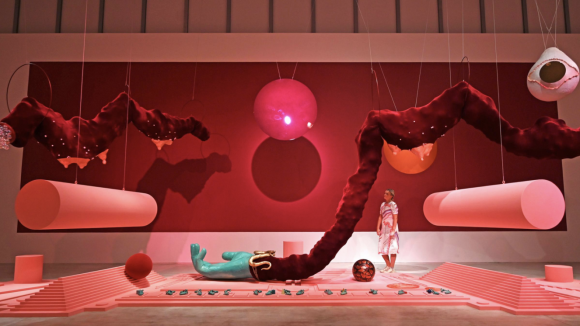 One of the good things about Tate Britain’s decision to tour the Turner prize around the country has been the interesting confrontations it has engineered between the location and the art. The first such effort, taking it to Londonderry in 2013, was an inspired piece of cultural diplomacy. Contemporary art and contemporary Derry may not have been natural bedfellows, but boy did they get along, each welcoming the other with a hug. The Turner prize has never felt more effective than when it went gooey on us in Derry.

Subsequent travels have been more routine. I am pleased to announce, therefore, that the 2019 voyage to Margate feels once again as if the fresh location has brought something tangible to the occasion. Unfortunately, what it has brought is a sharper sense of what has gone wrong with the Turner.

Margate was where JMW Turner himself loved to paint. They named the museum here after him. So the show coming to Margate ought to feel like a homecoming. But, of course, it doesn’t. Indeed, nowhere has this increasingly problematic event appeared quite as flagrantly imported as it does here.

The problem, once again, is politics. The use of the Turner as a propaganda vehicle for ultra-Londony evening-class lectures has become seriously off-putting. The Tate doesn’t even bother to pretend any more that it isn’t using art to turn us into better people. Art is “an agent of change”, megaphones the catalogue introduction by the Tate curator Amy Concannon.

Thus, Tai Shani has created a multimedia experience that “imagines a space beyond patriarchal limits… a world decoupled from gender”. Oscar Murillo gives us an installation that “explores globalisation and capitalism: exchange and movement”. Lawrence Abu Hamdan’s contribution is based on work he “undertook with Amnesty International into the Syrian regime prison of Saydnaya”, while Helen Cammock has made a film “that examines the overlooked role of women in the civil-rights movement in Derry”.

These are all causes to which I am happy to subscribe. I may be part of the patriarchy, but I certainly believe it needs bashing. I support the idea of a united Ireland. And don’t get me started on the terrible effects of global capitalism. Kill the corporations, say I; tax them till their teeth hurt. But I don’t go to art to be lectured in jargonised evening-class-speak on the bad ways of the world. More seriously, I know enough art history to understand what happens in systems where art is tasked with the deliberate delivery of political propaganda.

In Paris in the 1850s, the Salon became a Tate-like national organ that sought to turn the French into better people by bombarding them with heroic imagery of Roman soldiers standing firm on besieged bridges. This so-called art of les pompiers, named after local firemen’s helmets, which looked like ancient warrior wear, ended up having its raison d’être ripped from beneath its feet by a bunch of landscape painters who put on a ramshackle show in a makeshift photography studio in Paris, et voilà. The whole pompous national effort to improve the morals of the nation came crashing down because of the impressionists.

People don’t go to art to be turned into better citizens. They go to art to have their eyes pleasured and their hearts touched. That is what the Tate and its babbling prize have largely forgotten as they lecture Thanet locals on events in Syria and the decoupling of gender from its evil binary imprisonment. Turner is dragged into it with the ludicrous claim that he would have loved this year’s show because he, too, was “a radical artist”. Trust me, he would have loathed it.

Anyway, on with the charade. Cammock’s Northern Ireland film is 100 minutes long, and, as you sit there on your hard gallery box, wondering what kind of a mind ever believed showing an over-length episode of Dispatches in a back-hurtingly inappropriate gallery situation could ever be mistaken for an art experience, you can listen to the women involved in the early years of the Irish conflict sharing their sad memories. Or you could if anyone involved had learnt the rudiments of cutting a film. 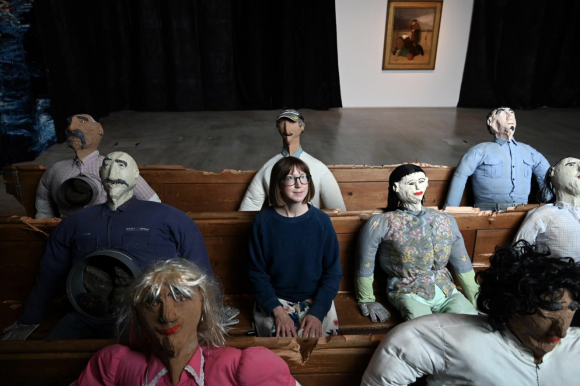 Murillo, born in Colombia in 1986, at least has a go at a genuine gallery experience with a roomful of stuffed mannequins who sit in front of one of Turner Contemporary’s huge picture windows, staring at a black curtain drawn across their view of the sea. The mannequins, worker-type lumpies in boiler suits, were transported to Margate by train, and their journey, recalled in a nearby video, is deemed part of the work’s message. They clearly stand for migrant workers, exploited and shabby, whose blocked-off view of the ocean attempts to prompt some poetic rumination upon their displacement. It’s a well-meaning contribution. Artistically, it could hardly be more clunky.

Shani, who tells us in her interview that she grew up in a commune in Goa, surrounded by an artistic family, is largely self-taught, which is perhaps why she feels free to babble on so absurdly about a future world she predicts in which male and female identities are seamlessly blended into a new being, with a handy sex organ that can pleasure and fertilise itself. A hologrammed head, hovering above Shani’s pink and deliberately vulvic collection of suggestive blobs and squirts, represents Semiramis, the all-knowing divinity of the future, whose portentous narration had me giggling crazily in an unforgivable display of cultural insensitivity. “In this feverish bed, his cock protrudes from his pussy,” Semiramis intones doomily to the startled citizens of Margate. “It is a thing of true wonder, alive, an unborn brute.”

Science fiction can be silly enough already without mixing in huge dollops of bio-porn. It’s a bit like those people you get on buses who inflict unpleasant details of their private life on other passengers by shouting into their mobile phones. They’re welcome to their privacy. Why impose it on us? Laughably, Shani complains in her interview that artists don’t get paid enough for being artists. The truth is, she should be paying us for listening to this fey and privileged narcissism.

By far the best contribution, and surely the nailed-on winner this year, is by the sound artist Abu Hamdan. Having been employed by Amnesty International to interview victims from an infamous prison in Syria, he was prompted into examining memories of noises and sounds. In Saydnaya, prisoners were kept in complete isolation, so the only sense they could employ to measure distances and textures was their hearing. But, as Abu Hamdan makes slowly explicit with his careful presentation of texts and sounds, stories and interviews, noises can be faked as easily as sights. For example, the noise of decapitation that studs the progress of Game of Thrones was actually achieved by beheading green coconuts. Thus, unexpectedly, Abu Hamdan’s compelling text art is actually a piece about fake news.

At last, something adult, insightful and profound.

Meanwhile, back at the Tate mothership of Tate Modern, the redoubtable Kara Walker has been let loose on the Turbine Hall, the largest installation space in art. Most artists are beaten by it. But not Walker.

As an African-American, she has made slavery her chief artistic concern, and with Fons Americana, the American Fountain, she gives us a sly “memorial” to the shipment of slaves across the Atlantic. 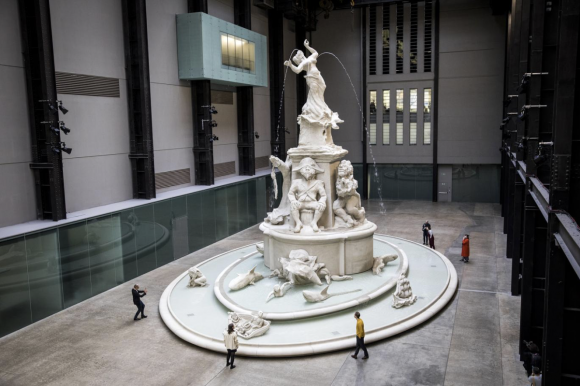 Inspired by the Victoria Memorial outside Buckingham Palace, Walker’s pretend monument presents water as an innocent conduit of evil, then, in its many wicked details, takes symbolic pops at those responsible for the crime. Keep an eye out for mentions of Kanye West!