Koons at the Ashmolean: like Popeye giving the Reith Lectures 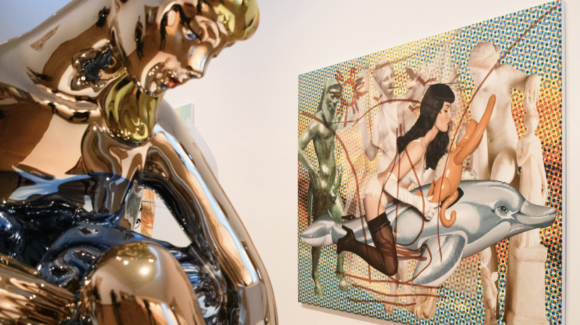 There are many annoying things about Jeff Koons. He’s slick, ingratiating, overly fond of kitsch, too notorious, too rich, too dumb. These are shiny faults that no one can miss. But the most annoying thing about him is that he sometimes makes things that are genuinely beguiling: that delight the eye and test the definitions. Unfortunately, his new show at the Ashmolean, in Oxford, is devoted mostly to the poor stuff.

Koons at the Ashmolean. It’s like having Popeye deliver the Reith Lectures. He’s here because he was invited by students to an art-history event and liked it so much, he felt a show would be appropriate. At his end of the deal, he gets an intellectual promotion. The Ashmolean gets to be down with the kids. Plus a show that makes evident the shallowness of Koons’s knowledge and the clunkiness of his art. 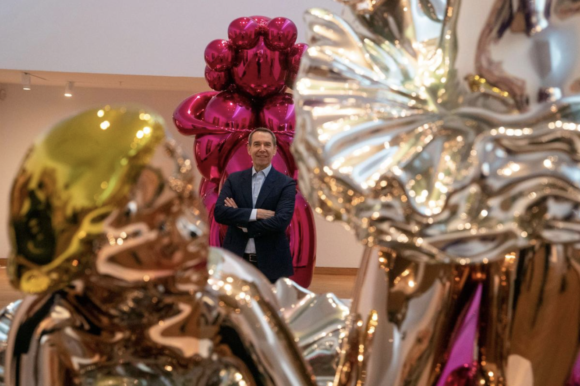 Curated by the artist, this mini retrospective features tasters from all his epochs. It begins well. The opening exhibit is one of his Equilibrium Tanks from the 1980s, in which a floating basketball is suspended spookily in a tank of water. For psychological reasons embedded somewhere deep in the basement of the human cerebrum, the suspended basketball makes you gulp for air while simultaneously insisting there is none to be had: Koons at his best.

Sadly, this is followed by a cluster of contributions from Mr Hyde: a kitsch Black Forest carving of some kids with a pig, and a fake-marble birdbath with a “gazing ball” attached to it, like the one Lady Gaga straddles on the cover of Artpop.

Gazing balls are an American thing. Made of highly reflective metal, these brightly coloured orbs bring a note of cosmic profundity and galactic infinity to the suburban American garden. But we don’t use them here. Which is one reason why Koons’s repeated resorting to them at the Ashmolean is such an epic fail. One he attaches to a Rubens painting; another to the Belvedere Torso. Never does the plonking down of gazing balls in a museum situation achieve anything resonant.

Worse still is the set of paintings known collectively as the Antiquity series. All of them feature classical statues attempting to indulge in some ancient hanky-panky: a soft-porn remake of the Parthenon Frieze. They’re a response of sorts, I suppose, to the fine selection of classical statuary found downstairs at the Ashmolean. But Koons’s homage to the Greeks is so tacky and misjudged, it makes your toes curl.

Fortunately, bad Koons stops there and some good Koons returns. A trio of shiny metal statues — two ballerinas and a giant Willendorf Venus — have set out to mimic and enlarge the fairy-tale prettiness that you find in Christmas tree baubles.

The brightened-up Willendorf Venus is the best thing here. The original, in the Natural History Museum in Vienna, is a tiny fertility trinket, shaped like a pregnant woman. Koons has recreated it as a giant balloon sculpture that looms over the room and attempts a rare union of humour and monumentality. It sparkles. It lifts the spirits. And, for a brief moment, it allows us to forget how feeble the other offerings are at this unlikely event.