They could have called it The Odd Couple. Certainly, the notion of pairing Sebastiano del Piombo with Michelangelo in a single show at the National Gallery is an inventive one. “The first ever exhibition devoted to the creative partnership…”, the press release declaims. Damn right it’s the first such exhibition. The twisty interaction between two of the more complicated figures of the Italian High Renaissance is not a show idea for the faint-hearted.

Sebastiano is the most elusive of the grandmasters of his times, which were c1485-1547. These magnificent Renaissance dates place him in the thick of the action. In Venice, his home city, Sebastiano’s teacher Giorgione was revolutionising Venetian painting, while Titian, a few years younger than Sebastiano, was starting his momentous career. In Rome, where Sebastiano moved in 1511, the year after Giorgione’s death, Michelangelo was hard at work finishing the Sistine Ceiling, while Raphael, his great rival, had just arrived, perfectly on cue to irritate and stimulate Michelangelo. So this isn’t any old stretch of art history. These are the key years.

We don’t know for sure how the newly arrived Sebastiano managed to worm his way into the confidence of the notoriously grumpy Michelangelo. In his earlier days, he’d been a lute player, and lute players are famously winsome, right? There was also the added frisson of Michelangelo’s jealousy of Raphael. By promoting Sebastiano as a young rival to Raphael, the scheming Michelangelo was hoping to insert his own nominee among the papal favourites.

That, at least, is how these events have come down to us in the recollections of Giorgio Vasari, whose gossipy The Lives of the Artists remains the key record of the times. In the triangulation of Michelangelo, Raphael and Sebastiano, we can at least recognise a passable answer to the big mystery at the heart of this show: why was the famously unhelpful Michelangelo so evidently helpful to Sebastiano? He promoted him. He employed him. He gave him drawings to work from. How come? 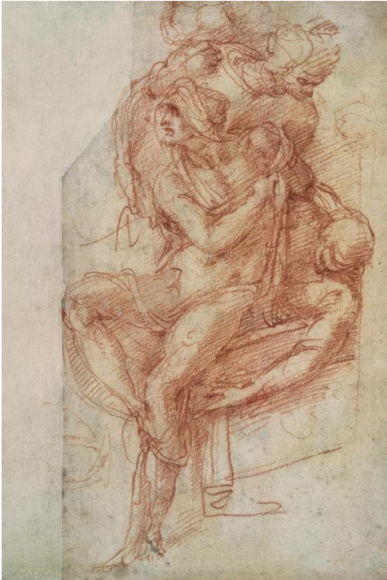 We begin with a fragile attempt to illuminate Sebastiano’s Venetian origins. The organ doors he painted for the church of San Bartolomeo, next to the Rialto market, feature two large brown saints, St Sebastian and St Bartholomew, both of whom seem surprisingly prosaic and un-Venetian, though a decent restoration of this unhappy picture may well reveal some poetic colour beneath the smoky bacon grime. The adjacent Judgment of Solomon, meanwhile, from the English stately home of Kingston Lacy, is so heavily restored and so unfinished that coming to any meaningful conclusions about Sebastiano’s touch is problematic.

Michelangelo, who is scattered here and there in what is essentially a precis of Sebastiano’s career, has no such obstacles. A tiny drawing of a Madonna and child produced for Sebastiano after his arrival in Rome is the size of a credit card, but what a wallop it packs. The pent-up fury that is Michelangelo’s calling sign makes even a subject as inherently gentle as a mother and child feel explosive. Sebastiano’s painted version, shown alongside, is 100 times bigger, but has none of the force.

It’s an exhibition-long truth: every time Michelangelo makes an appearance, he shows up Sebastiano. And with so many condition issues fogging the lens, Sebastiano’s USP remains hard to recognise. He is said to have married Venetian colour with Roman anatomy, but his best picture here, the epic Lamentation over the Dead Christ, from Viterbo, the first of his collaborations with Michelangelo, painted in about 1512, stands out for its sheer unusualness.

For a start, it’s set in the night: the first nocturnal altarpiece of the Italian Renaissance. Where most pietas show Christ slumped across his mother’s lap, this one has him stretched out on the ground in front of her, while a ghostly moon casts the scene in an eerie light. Michelangelo supplied the drawings that Sebastiano used for the Madonna’s pleading pose, and for once the collaboration works. How to twist a figure into a pose that intensifies the emotion? That is the lesson Sebastiano has learnt here from the master.

Having produced a picture as innovative as the Viterbo Lamentation, we might have expected him to kick on into great Roman achievements. But he doesn’t. Not on this evidence. According to Vasari, he was lazy and quickly seduced by luxury. So there simply isn’t enough to go on in deciding his final worth. 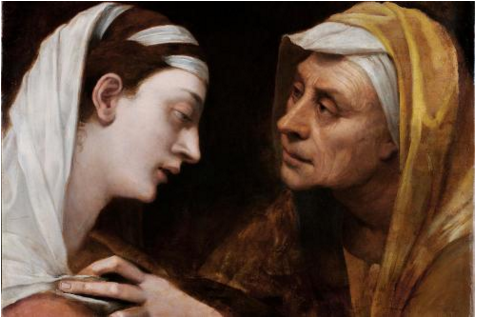 The National Gallery’s huge Raising of Lazarus is impressive in size, ambition, complexity; and the landscape at the back is delightful in a sunlit Venetian fashion. But it doesn’t light the fuse in the way the Viterbo Lamentation does. Again, Michelangelo supplied some drawings for the twisting figure of Lazarus, but this time his contribution feels lost in the melee. What is noticeable is that the Opal Fruit colours Sebastiano is now using in his robes and togas were borrowed from the Sistine Ceiling, and that their acidic tonality brings something tangy to Renaissance art.

All the way through the show, there’s a sense of a bit of material being stretched a long way. And this lack of proper evidence, in good condition, leads to a reliance on fall-backs and substitutions. Thus, Michelangelo’s Vatican Pieta is represented by a plaster cast, and the dark Flagellation from San Pietro in Montorio, in Rome — a chapel that cannot be moved — has been recreated on an exact scale with state-of-the- art digital technology. All of which prompts confusion over what is real and what is not.

Add the fragmentary condition of many of the exhibits, and you have an event that never manages to focus clearly on an artist who is already elusive. The final Sebastiano offering, a few pieces from a ruined Visitation painted in the 1530s, are so thick with overpainting, so grey and ghastly, that they add nothing trustworthy to his story. Surely he was never this bad?

So the show is a triumph of hope over reality. And I have probably painted a less appealing picture of it than it deserves. In tackling a fiercely difficult subject, it is brave, informative and inventive. And if you take out the patched-up Sebastianos, the pretend Sebastianos, the maybe Sebastianos, you are left with a couple of soaring masterpieces, a sequence of exquisite Michelangelo drawings and some superb sculptural moments as well.

How marvellous to see two versions of Michelangelo’s Risen Christ from Santa Maria sopra Minerva with their startling life-size nudity. They are here because Sebastiano, as Michelangelo’s confidant in Rome, played a role in the sculpture’s installation. The first version was aborted when a black inclusion appeared in the marble on Jesus’s face. But with the two versions together, we can see immediately how Michelangelo improved the work, in typical Michelangelesque fashion, by twisting more emotion out of the pose.

It’s a brilliant creative moment, and makes vivid what is generally lacking in Sebastiano’s exhibited oeuvre. Meeting Michelangelo may have transformed his career. But he might have been better off had it never happened.