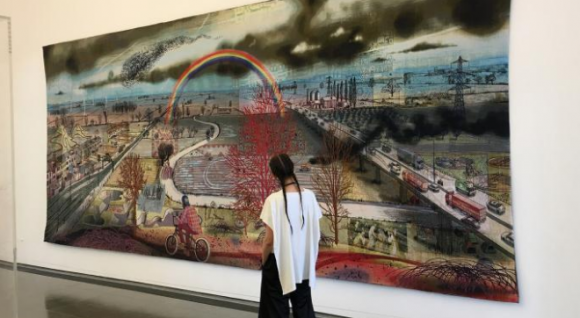 Grayson Perry was on telly the week before last. Again. Every time he wins another Bafta for his inventive films, or pops up again on Have I Got News for You, or delivers a Reith lecture, or brings out a new book, or appears on Question Time, this astonishingly fertile cross-dresser embeds himself and his madcap attitudes deeper still in our national consciousness. He’s the Danny La Rue of art, the Mrs Brown of contemporary aesthetics. If you want proof that artists can be articulate, knowledgeable, politically agile and clubbable, Perry is your man. And your part-time woman.

But this social adaptability is also problematic. Within the art world itself, his popularity is viewed with suspicion. I have had conversations with high-ranking Tate officials who roll their eyes skywards and suck in air at the mention of his name. Artists are supposed to sit in garrets and make art, not sit on panel shows and make jokes. In Tate’s collection, you will find installations by obscure Romanian octogenarians that few have heard of, but you won’t find much by Perry. What the real world applauds, the art world regrets.

This is the backcloth against which we need to view the selection of his work that has now arrived at the Serpentine Gallery, and that he has provocatively entitled The Most Popular Art Exhibition Ever! He knows it is no such thing. He knows that calling it that will annoy the nuns and monks of the art world. But he has done it anyway, because that is the kind of artistic provocateur he is, and because it points to issues he is seeking to address in the show itself. This is Perry employing the schoolyard defence. Call yourself “four-eyes” first and no one can hurt you by calling you “four-eyes”. 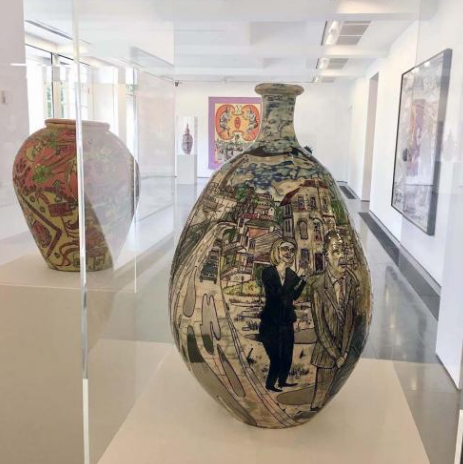 The opening vista is duly devoted to his popularity. The vase on the right lists the most popular exhibitions in the world last year. The vase on the left is splattered with imaginary praise directed at his work by notable art critics, including me. Looming up between the two agenda-setting pots is a huge new woodcut of the artist, naked and reclining on a settee, awaiting our inspection. His pose is a classic Venus — full-frontal, leaning on one arm, staring out seductively. But the nude has both a dong and bristols — my attempt at Grayson-speak — so he/she isn’t just reclining. He/she is also testing our sexual values and playing impish games with our desires. Typical Perry.

As always with his woodcuts, there is much fun to be had examining the details. Where most reclining Venuses recline in plush boudoirs, Perry’s is at home in front of the telly, surrounded by the messy accoutrements of everyday life: mugs, books, trainers, mobile phone. Visible in the next room is the macho motorbike he likes to ride when dressed as his transvestite alter ego, Claire. On the coffee table is a copy of the Zaha Hadid catalogue from a previous show at the Serpentine. Thus, every domestic detail slyly makes a wider connection.

Fortunately for Perry, and for us, he hasn’t fully succumbed to the dangerous condition — not yet — and the rest of this Serpentine show quickly forgets the popularity issue and turns instead to other pressing topics of the day, such as Brexit and the relationship between President Trump and Theresa May. These are examined in an inventive array of pots, prints, carpets, tapestries and sculptures, displayed brightly about the galleries with an elegance that reminds us how, before it became an exhibition space, the Serpentine was the tearoom of the Kensington set.

The big central cupola addresses Brexit. I say “addresses” — perhaps “wafts across” would be more accurate. Perry doesn’t preach or insist. He samples, observes and giggles.

You may already have seen the results in a recent television film on Channel 4. Having sampled the tastes of the two sides in the argument, Brexiteers and Remainers, Perry created two huge vases encapsulating their opposing positions. Except that they didn’t, really. After all the questionnaires had been filled in, the two sides ended up being significantly similar. Both chose blue as their favourite colour for a pot. Both gave us a wacky array of distinctive characters. Yes, the Remainers are generally better-looking than the Brexiteers, but that’s about it when it comes to difference. 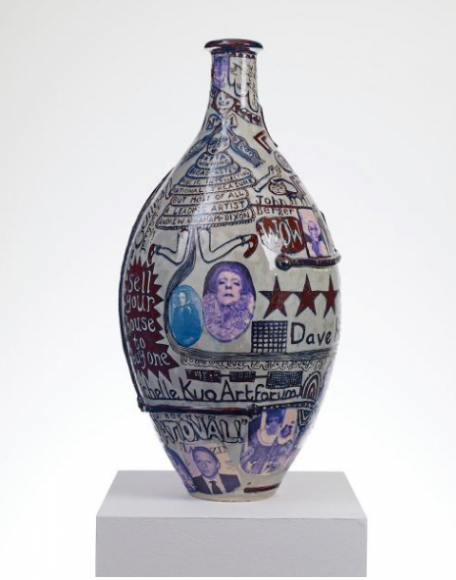 Best of all is a vast new tapestry, Battle of Britain, in which the two sides stare across at themselves from two ends of the Great British divide. On the left is a grim terraced skateboard park. On the right is a huge flyover carrying Waitrose trucks to London. In the grim housing estate, the kids scrawl graffiti on the walls and trace glum cycle tracks in the concrete. On the busy flyover, Polish lorries speed after the Waitrose trucks to ensure that we Londoners get our fresh European produce on time. Ouch.

All this works better in art than it did on TV. On TV, Perry’s final observation, that the two sides have more in common than they have dividing them, felt like One Show thinking. Easy. Soft. A cop-out. Here, especially in the stretching tapestry, the issue becomes charged and personal: a lament for the changing face of Britain, an attack on the social fabric. And unless I am very much mistaken, the big kid on a bike who looms up in the foreground and faces a choice about which hill to descend is another symbolic representation of Perry himself.

This, finally, is what he is best at: nimble social observation laced with sardonic knowingness. He’s a sarky collector of telling details who uses humour as his primary weapon. I guffawed happily at the mottos plastered across the pot called Luxury Brands for Social Justice: “Flat Whites Against Racism”; “Rich People Deserve Equal Rights Too”. The DNA of this quintessentially British cheekiness can be traced back to Hogarth. The pietists currently in charge of our national taste have no place in their agendas for it, but it is a traditional component of British art. Like Hogarth, Perry uses humour as both a weapon and a delivery system connecting him to the bigger audience he seeks to address.

It’s impressive and praiseworthy. So, too, is the sheer fertility of the man. Given how many openings he attends, how many TV programmes he pops up on, how many lectures he pumps out, how does he also manage to produce this much art? Arise, Sir Grayson. Patron saint of busyness.