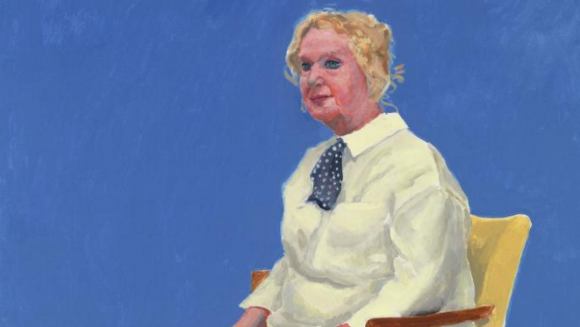 One of the most noticeable features of the new £260m Tate Modern is the instinctive trust placed by the building and its hang in what we might call the “deconstructivist” approach to art. It’s the approach where you lay down the pieces and the visitor is tasked with the effort of putting them together.

The building encourages this approach by consisting so prominently of foyers and staircases — a giant 3D board game across which the public can merrily scamper in a building-wide game of snakes and ladders. The hang encourages it by saying nothing specific about anything. Split into thematic groupings of exemplary vagueness — Artist and Society; Materials and Objects; In the Studio; Media Networks — the Tate’s collection of modern art has dispensed with isms and national schools, with intentional contexts and the aims of the artist, with notions of quality and a meaningful chronology, and replaced them all with a game of cultural snap that involves noticing how one thing looks next to another.

The artworks themselves are remarkably consistent in adopting the same approach. Whether it be Marina Abramovic’s laying out of “72 objects of pain or pleasure” on a trestle table or Rebecca Horn exhibiting the props she used in her 1970s performances or Meschac Gaba displaying scores of pretend exhibits for his “Museum of Contemporary African Art”, what all this art has in common is long-windedness. These are narratives without conclusions: beginnings without ends. Given the task of making sense of them, the viewer is forced to join up dots that have no connection.

The Tate calls this “interaction”. What it really is is “distraction” — keeping visitors busy by giving them claw cranes to play with. It’s a process so hit and miss that the misses are no longer relevant. If you never encapsulate, you can never be wrong. 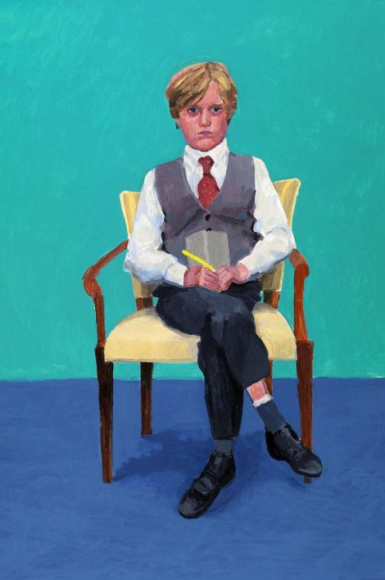 Apologies for so much of my own long-windedness in what is supposed to be a review of David Hockney’s new portraits at the Royal Academy, but I am trying to put into context the tone and depth of his achievement. If any genre of art is principally about encapsulation it is portraiture. If ever an artist exemplified tendencies that are the opposite of “deconstruction” it is Hockney. And if ever an exhibition showed us how art in the best hands is a dish with a taste, not a basket of ingredients, it is this one.

For two and half years Hockney has been painting portraits of his friends and visitors — 82 pictures in total. All were painted in California on identically sized canvases and with a range of acrylic paints that dry quickly in the sun, and which have an essential brightness to them that feels immediately unproblematic. If you want Rembrandtian moods or moments of foggy introspection, this is not the portraiture for you.

Limiting himself to three days’ work on each picture, Hockney paints his people sitting in the same chair in front of the same curtain on the same podium in the same studio. At first sight, the similarities are what strike you. Same scene. Same size. Same set-up. But the sense of repetition soon fades. Instead, what begins to emerge is how varied our markings are, how creatively we present ourselves, and how good Hockney is at noting the differences.

A few of the sitters are famous enough to be instantly recognisable — Barry Humphries with his 1940s brogues and his Humphrey Bogart fedora; Larry Gagosian with his Mormon air and his Manhattan hush puppies. But most are not. They are strangers who have passed through Hockney’s world and whom he encapsulates here with an eye for detail that is anthropologically delightful. 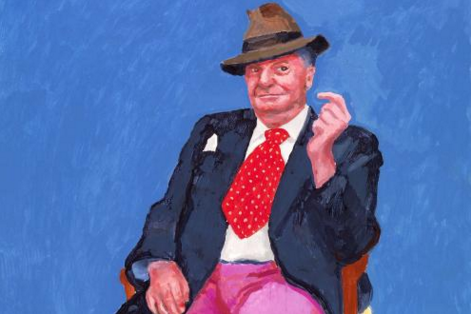 The grey and bearded artist John Baldessari sits with huge hands folded across his lap exuding a biblical air that is also American and lanky. The lower half of Rita Pynoos is encased in a spectacular dress of red silk whose atmosphere belongs in a painting by Veronese. Jonathan Mills, clad head to toe in yellow and sitting against a background of Provençal blue, reminded me instantly of Van Gogh’s painting of the Yellow House in Arles. The house has become a human, but its colour scheme survives.

The 82 portraits actually describe 79 people, as one has become a still-life — the sitter failed to turn up and Hockney was loath to waste the paint — and three are of the same handy guest, Bing McGilvray, in different clothes and at a different moment. Ultimately, what it adds up to is a mass examination of the dynamics of portraiture. By keeping the same chair, the same format, the same flat background, Hockney focuses our attention on the telling details: the details from which pictorial identities are formed. And because the situation is repeated so closely in every image, these differences seem to stand out more markedly.

If you go though the show looking only at the hands (Hockney has always been especially good at the difficult task of painting hands), you will see that some are clasped, some are folded, some are big. Caroline Cushing Graham dangles her emerald rings before us so we cannot miss them. Richard Sassin sits with his legs wide open, pointing accidentally at his genitals. When you are as playfully observant as Hockney, every gesture tells a story.

So too do the shoes we choose. Cushing Graham also wears a pair of riding boots that many a High Court judge would pay to have strutting across his naked back. Maurice Payne with his Dr Martens, Humphries with his brogues, Ivor Schreiber with his outsized baseball boots — Hockney’s shoes are as indicative of their owners’ identities as a pet dog.

The notorious shoe-lover Van Gogh is a constant mentor. Not just in the uncomplicated brightness of the colours favoured here, but in the exultant faith placed in portraiture as a genre, and the sense, too, of working inventively in series. Several specific poses have been borrowed from him, most obviously in the show’s opening work, in which one of Hockney’s assistants holds his head in his hands and covers his face. It’s a direct replica of the pose of the old man in Van Gogh’s sad rumination on mortality, At Eternity’s Gate. Apparently, Hockney sees this first picture as a self-portrait. It’s a rare display of angst in a show that is otherwise conspicuously free of it.

The task of producing 82 pictures for such a gigantic project would have floored a lesser artist, and perhaps a younger one, but, at 78, Hockney has entered the stage in his career where work has become a fight against time, and where busyness and energy are defences against the deadline. His extraordinary energy levels sag mildly here and there — especially in his efforts at portraiture’s most difficult subject: the unlined young man — but with dressy female sitters and characterful old-timers he remains impressively inventive.

As far as the actual likenesses go, I can only comment on the two or three sitters I know personally. All look largely like themselves, but not exactly. Norman Rosenthal, known in the art world as Roman Nosenthal, has squeezed himself into a yellow suit from a thinner decade, and sits there pumped up jauntily like a large party balloon. The art writer Martin Gayford is as crumpled as a geography teacher and as unexciting as the men’s range at British Home Stores.

The finest portraits are of the people Hockney knows best. With portraiture there is no final substitute for intimacy. His sister, Margaret, dressed in a lumpy two-piece of billowing blue trousers and a neat white shirt, is the show’s warmest female presence. Celia Birtwell, “the old, old friend” in the catalogue who has appeared in so much excellent Hockney portraiture already, has the exhibition’s best eyes, shining brightly in a beautiful Van Gogh green.

In likeness after likeness, relentlessly, almost endlessly, Hockney’s powers of encapsulation are subjected to a mother of a test. In almost every instance, they pass it with flying colours.