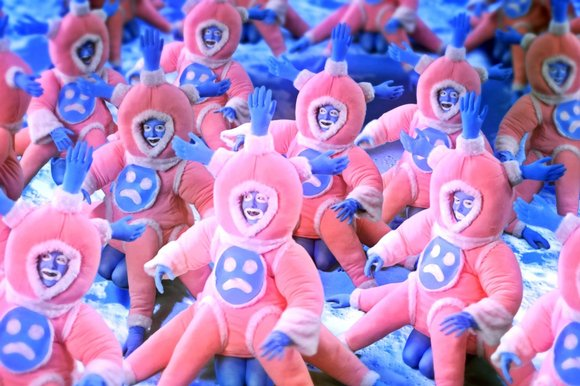 Imagine a wardrobe filled with so much stuff that you have to throw your body weight against the door to close it. Now imagine reaching forward, gingerly, and opening that door. And everything inside bursting out in a torrent. That’s what Electronic Superhighway, the new exhibition at the Whitechapel Art Gallery, feels like.

To be fair, most exhibitions at the WAG feel overloaded. It’s the house style. The last big show here, Adventures of the Black Square, a history of geometric abstraction, was just as chaotic. I admired Adventures because it felt as if it was hanging onto the coat tails of something exciting and delightful. The same cannot be said of Electronic Superhighway. This migraine-inducing survey of the impact of throbbing computer technology on art had me looking round desperately for a window to open.

I say “survey”, but the WAG doesn’t really do anything as legible as a survey. Rather, it prefers the Sturm und Drang of a gallery experience in which the visitor is tasked with joining up the dots. We begin with a giant female arse that looms over the entrance door and welcomes you to the action with a texted conversation emerging from its sphincter. Is that Kim Kardashian, I found myself wondering instinctively. But no. It’s a recent work by Olaf Breuning called Text Butt.

“Did you had fun last night?” asks one cheek.

“Whaterver you think,” replies the other.

Breuning’s talking arse, complete with Instagram-style misspellings, is saying nothing coherent. But (butt!) that seems to be the point. In the cut-and-paste world of texted chatroom dialogue, a conversation between two voices becomes a ping-pong match of random thoughts. In the old days, conversation was a way of communicating meanings. In the internet age, it’s an opportunity for yapping identities to bark.

The show takes its name from a phrase used in 1974 by the master of TV monitors, Nam June Paik, inventor of video art and an artist who spent his entire career extolling the artistic virtues of technology. Paik predicted a world in which physical distance would no longer be an obstacle to human dialogue. Instead, we would all be able to communicate along the Electronic Superhighway — satellites, coaxial cables, laser beams, wave guides and fibreoptics. In some ways, he was spectacularly right. In other ways, he was catastrophically wrong.

Though this is billed as a look back at 50 years of electronic influence on art, the curators have employed the confusing wheeze of presenting everything in reverse — starting with Bruening in 2015 and ending up, two floors later, in 1966, with the first electronic happenings organised by EAT. No, that’s not the dull sandwich shop you find today at airports, but Experiments in Art and Technology, an ambitious artistic collective, led by the artist Robert Rauschenberg and the engineer Billy Klüver, that sought to bring together the seemingly disparate worlds of art and science in a series of nightly happenings in New York in the 1960s.

A flickering black-and-white film that records these events proves, as all such flickering 1960s films invariably prove, that you had to be there at the time. Peering into the nostalgic blur of wobbly jump-cuts and adventurous focus leaps, I could just about make out lots of wires, lots of early television monitors, some insistent electronic throbbing and a bunch of scientists pushing buttons, dressed in trademark white shirts and thin ties. From this distance — from 50 years into the future — all you really get from the film record of EAT in action is a sense of simultaneous electronic chaos.

But the show ahead — or rather the show behind — argues that EAT’s wacky experiments with science mark the beginning — or end — of an especially fruitful creative relationship. What did art take from technology? Back in the early days of the affair, the answers are tangible enough. At first, it was a set of new looks. Ulla Wiggen, from Sweden, spent the 1960s painting circuit boards and the insides of computers, in pictures that marry the geometric abstraction of Mondrian with Dada’s fascination with machines. Peter Sedgley, the pioneering 1960s op artist, gives us glowing circles that change colour when you shine different lights on them. This is technology persuading art to enjoy the simple pleasures of new shapes and new colours.

But this beautiful technology soon gives way to more problematic concerns. In 1969, with the internet still a couple of decades away, Allan Kaprow, the conceptual artist and inventor of the happening, mounted an event called Hello, in which different groups of artists and scientists in different locations could communicate on banks of television screens and yell “I see you” at each other across the ether.

There’s a particularly touching moment when a dad in the studio manages to talk, live, to his son at school. The excitement generated by this new interactive technology puts happy smiles on the faces of everyone involved in the project and reminds us how miraculous all this pioneering communication must initially have seemed. What a shame it didn’t last.

The show wants us to believe that the invention of the internet and the growth of interactive culture that followed led to ever more exciting developments in art and communication. But the artworks that seek to make this point actually grow glummer and glummer. How quickly the happy smiles of Kaprow are replaced by ceaseless narcissism and endless brooding. Instead of encouraging better communication between distant peoples, the age of the internet appears to have spawned a race of Ancient Mariners, obsessed with telling you their story.

Lynn Hershman Leeson sets out the autobiographical choices facing Lorna, an agoraphobic fortysomething who lives alone in a room with a television. Keith Obadike goes on eBay and puts his “blackness” up for sale, with a starting bid of $10. Jayson Musson, who appears to believe he is an art philosopher, presents a vlog called Art Thoughtz, in which he stumbles dumbly through the art issuez of his timez.

Evan Roth gives us a packed spreadsheet of everything he has watched online in a day. Amalia Ulman invents an Instagram character who presses desire buttons in her audience without actually existing. Celia Hempton spends her days talking to strangers on Chatroulette, then dashing off paintings that record their meetings. Jacolby Satterwhite, the biggest narcissist in a show sloshing with narcissism, takes his clothes off and prances acrobatically about a sci-fi netherworld in which he is both creator and star.

Finally, then, this is a depressing display. The closer we get to our own times, the fiercer becomes the babble of creative voices seeking mostly to talk about themselves. What starts out as a search for new ways of communicating ends up as the loud roar of electronic soliloquies screaming me, me, me.