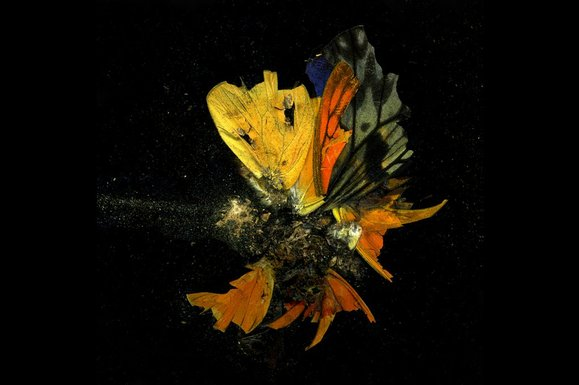 Among the myriad mysteries of art, a particularly puzzling one is: why do we make so little of Mat Collishaw? Why hasn’t he had big shows at the Serpentine or the Hayward? Why do we never put him on Turner prize shortlists? Why does a whiff of failure rise up from his career — the elusive scent of never quite making it? Why, above all, has Tate Modern filled its Turbine Hall with the huge non-event that is Abraham Cruzvillegas’s Empty Lot, a portable allotment of planks and scaffolding that might, if we’re lucky, look mildly interesting in a couple of months, when it could have devoted some space to Collishaw? Answers on a postcard, please. First, though, hear me out on the subject.

On paper, Collishaw has always had everything going for him. As a leading member of the so-called YBAs, he exhibited in all the right shows. Charles Saatchi collected him. When people hurled around all those accusations about “shock artists”, as they liked to do with the YBAs, they were often thinking of Collishaw. The notorious Sensation show at the Royal Academy in 1997, which did so much to cement the reputation of the YBAs, was notorious for many reasons, but a leading one was that it had Collishaw’s Bullet Hole in it, a creepy blow-up of a wet entry point in a human head, which many felt went beyond the pale.

From the start, he has been a transgressor, one of those rare artists whose work makes you feel uncomfortable. Tate Modern wouldn’t show him for the same reason that the Queen doesn’t invite down-and-outs to her tea parties. Some human truths are best kept outside the walls. 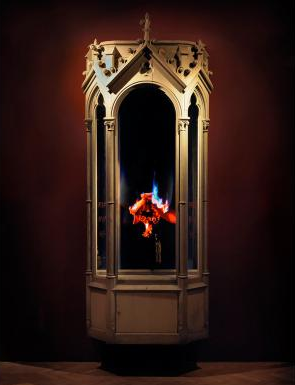 So it has fallen to the New Art Gallery, in Walsall, a marvellous but lonely outpost on the cultural map of Britain, to put together a survey of his work. It’s not nearly a big enough show to call itself a retrospective, but it does have early things in it, and its intense mix of beauty and twilight does a fine job of nailing down what Collishaw brings to the tea party. Which, reader, is not cucumber sandwiches.

Indeed, the first room I walked into was especially dark for an art gallery, and there, spotlit on the black walls, was a set of eerie food pictures of unexpected things on pewter plates. One showed a lobster surrounded by shrimps. Another featured some kind of triple-decker BLT, with pastrami instead of bacon. All had been photographed nocturnally in the manner of a 17th-century Spanish still life. All glowed with a spiritual austerity that seemed at odds with the food they depicted. Pastrami isn’t spiritual.

It turned out that the entire sequence, called Last Meal on Death Row, showed the final meals ordered by condemned prisoners in the US. The sandwich was the final wish of Bernard Amos, sentenced to death in Texas for shooting a man in a robbery. The shrimps were for Allen Lee Davis, who murdered a woman and her children in Florida in 1982. These terrible deaths have inspired a darkly beautiful art. Something important is being said, as well, not about murder, not about guilt, not even about the American court system, but about the transportative sanctity of food.

The reference to 17th-century Spanish still lifes is typical. There is much to admire about Collishaw’s work, but one of the things I admire most is his magpie erudition. In this show he quotes from Zurbaran, Dürer, Rubens, Caravaggio, de La Tour; and in every instance he does so with clever slippages and sly transformations. Collishaw doesn’t just steal from the past, he steals so well. 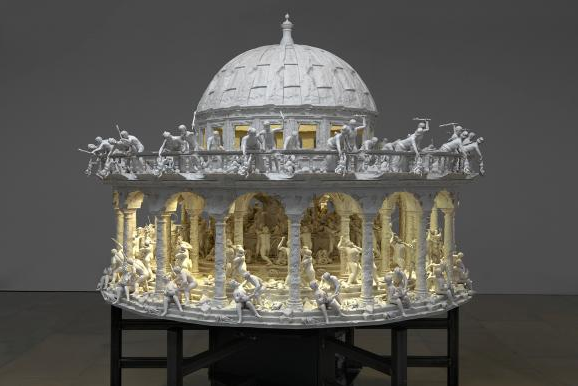 For Your Eyes Only is a mysterious three-part video work set in a wooden reredos that looks, from a distance, as if it must feature something holy — a crucifixion scene, perhaps. A closer inspection, however, reveals that Jesus and the two thieves have been replaced by three scantily clad pole dancers. And what’s really being noticed is a naughty vertical connection between poles and crosses; and an even naughtier sartorial rhyme between loincloths and skimpy pole-dancing gear. So, yes: you can take a YBA out of Soho, but you can’t take Soho out of a YBA.

If you’re looking for a show that lightens up, this isn’t it. Set in a permanent chapel murk, the entire exhibition keeps plunging us into edgy, neurotic, gothic moods. And it does so with outstanding invention. One of the best things about Collishaw is the variety of methods and techniques he employs in his ghostly explorations. Deliverance, a spooky, throbbing, spectral installation that surrounds you with the ghosts of desperate children lost in wars, has actually been created with phosphorescent photographs lit by a strobe.

Sometimes the darkness is laid on too thickly, and the atmosphere grows a mite too close to the London Dungeon’s. Insecticide is a suite of huge butterfly pictures in which the unfortunate lepidoptera, fated in art forever to symbolise the fragility of life, are pinned against black backgrounds, smashed and frazzled. On a similar theme, The Venal Muse is a set of flower sculptures in which the orchids and irises grow on toxic soil covered with rusty cans and discarded tyres. It’s the cliché about finding orchids on a rubbish tip given an obvious visual form.

The Nurofen moods can get too much. But it’s never a problem for long, because by the next room, Collishaw’s inventive impulses have led him somewhere different again. One of the best works in the show is a simple and lyrical tribute to Dürer’s famous watercolour of a seemingly nondescript clump of grass. Collishaw has gently animated the Dürer and turned it into a light box in which the grass is lightly swaying. As with the original, it’s a work whose message is: you don’t have to be a rose or an orchid to be special in nature. Everything in nature is special. Good ecology. Great art.

The show saves the biggest surprise for its final sight — a huge installation on the top floor called All Things Fall. You walk in, and before you is a model of a classical temple, circular, domed, becolumned, around which hundreds of nude figures have been arranged in cryptic poses. What they are doing is unclear. But it seems to be something nasty. Suddenly the lights dip and the temple begins to spin. Faster and faster it goes, until the figures crowded around it jump into action, like drawings in a flipbook, and you have before you a remarkable re-creation of the Massacre of the Innocents, the biblical murder of every newborn boy ordered, at Christmas, by Herod. The sudden burst of unexpected violence is brilliantly paced, brilliantly achieved, in an artwork that is nothing less than a contemporary masterpiece.

Come on, Tate Modern. Boot out the tedious garden scaffolds of Abraham Cruzvillegas. This is what you should be supporting and buying.
Mat Collishaw, New Art Gallery, Walsall, until Jan 10