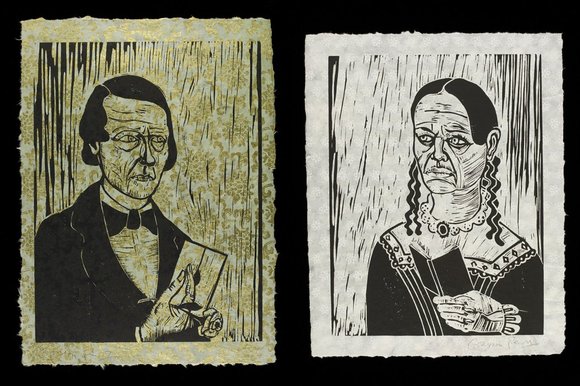 When you are living through an artistic era, and important developments are taking place around you, those developments are easy to miss. Your nose is pressed against the glass, and you need to step back to regain some perspective. Even a development as huge as the untrammelled growth of identity narcissism that is currently overwhelming the visual arts can remain out of focus.

Identities. We all have them. Human beings have never lived without them. They are a given of human existence. Two a penny. Yet never before in art has there been such a mad scramble to declare them, describe them, shove them in our faces, and nominate them for special attention. Watching the spectacular numbers of artists currently screaming “Look at me, me, me” in their artworks is like watching a cliff face of herring-gull chicks clamouring to be fed. It’s the art equivalent, I suppose, of reality television. Nobody wants to be a nobody any more.

To see these issues being aired — unwittingly, but legibly — I suggest a visit to a small display at the Victoria and Albert Museum called Facing History. The show’s stated ambition is to survey the ways in which contemporary portraitists have borrowed things from the art of the past: a format, a style, an example. Evidencing the spread of identity narcissism is something the resulting selection does by accident.

Ransacking the past is certainly a popular creative strategy. Everyone seems to be at it. Julian Opie, for instance, who was once a snippy YBA, has transformed himself into a sleek, designer portraitist who reduces people to their essential comic-book outlines. For this show, he borrows the look of 18th-century “silhouette portraits” and combines it with formats developed in Renaissance portraiture: matching his-and-hers profiles set in roundels. In Piero della Francesca’s world, it was a format reserved for the marriage portraits of the dukes of Urbino. In our world, any Tom and Dick can be made to look like Tintin by Julian Opie, and have their reduced likenesses mass-produced as Renaissance roundels. In Piero’s world, fame was rare and expensive. In our world, it’s common and cheap.

Opposite Opie, Tom Hunter raids another corner of the art-historical goody shop with a series of moody portrait photographs inspired by the paintings of Vermeer. In the Vermeer, a young woman stands by a window and reads a letter from a distant lover who may have been lost at sea. In Hunter’s version, a single mum with a baby stands by a window and reads the eviction notice served on her by the council. Thus Vermeer’s delicate rumination upon time, love, loss and hope has been replaced by a clunky storyline straight out of EastEnders.

Another former YBA, Gavin Turk, has never been slow to foreground his own identity and the issues it raises. Turk it was, remember, whose graduation show at the Royal College consisted of a blue heritage plaque that read: Gavin Turk Sculptor worked here, 1989-1991. Joe Bloggs was pushing himself forward for the Heathcliff role.

In the current display, Turk is represented by a portrait of himself — naturally — in which he seems to be dead. His eyes are closed. His face is ashen. We appear to be looking at his death mask. In the past, only kings and giants of culture had death masks made. Now, even the vassals are at it. A childish modern mind is playing bumper cars with the historical solemnity of death.

The buoyancy of Turk’s moods separates his art from most other forms of identity narcissism. True, Cindy Sherman, narcissist supreme, who is also included here with a striking costume piece in which she pretends to be an 18th-century American farmer’s wife, is a more humorous presence than is usually recognised. And Grayson Perry’s double marriage portrait, in which he and his wife burgle some respectability from the past by posing as a pair of Victorian shopkeepers, is typically cheeky. But, in general, identity narcissists are unsmiling and pious.

A particularly telling example of the genre is Bettina von Zwehl’s Made Up Love Song, a 34-part artwork that ought to be a one-part artwork. Von Zwehl is a former artist in residence at the V&A. During her six-month sojourn — two or three times a week, same place, same pose — she photographed a black assistant who worked at the V&A called Sophia. The photographs were taken in profile, like those Renaissance portraits again, and presented in a circular format, like Elizabethan miniatures. The 34 photographs have now been arranged around three gallery walls.

The results are initially pleasing. Sophia is very beautiful. The lighting is atmospheric. The miniature format has you leaning in for a better look. Unfortunately, over the next 33 repetitions, nothing much happens. In one picture Sophia wears a hat. In another her hairline changes minutely. But that’s it. Like everyone else at the show, I looked attentively at the first portrait, and speed-viewed the rest. Here are 33 portraits that expect your attention, but don’t earn it.

I wish I could say the same of the big set of woodcuts shown here by Ellen Heck, called Forty Fridas. Each of the prints features one of Heck’s acquaintances — Hiltrud, Davina, Tomoko — dressed deliberately like Frida Kahlo, the Mexican surrealist and everybody’s favourite feminist icon. With their Frida-style turbans and shawls, big jewellery and flyover eyebrows, all these sitters are happy to fuse their own identities with the bigger, uber identity of Kahlo. Personally, I found it all rather spooky. When did fan-worship become a worthwhile subject for art? Heck’s entire effort struck me as cultish and silly.

That said, one thing this small but punchy display certainly proves is that identity narcissism has its moments, and that the current obsession of artists with themselves has given the entire genre of portraiture a new lease of life. Twenty years ago, portraiture appeared to be a spent genre. Not any more. The obsession with identity has refuelled it with passion, invention and purpose.

Which is not to say that the whole thing is not also prone to hilarious reality-droppage. In the gardens of the V&A, the Mexican artist Frida Escobedo has created a set of geometric platforms that jut out above the V&A pond. Apparently inspired by the architecture of the Aztec city of Tenochtitlan, these platforms are said to “illustrate the conflict between how we see ourselves and how others perceive us”. Eh?

Not one of the happy paddlers I saw taking off their socks and using Escobedo’s handy platforms as a sun deck was considering the conflict between how they saw themselves and how others perceived them. Honest.