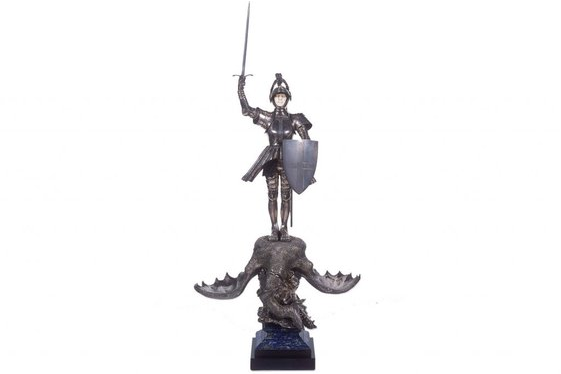 Over many years, in many articles, I have tried hard to admire the art of the Victorians. In other fields of achievement, in engineering, science, medicine, the Victorians are transparently among the civilisational greats. If someone came along and argued that their achievements deserve to be ranked alongside those of the Greeks or the Romans, I’m not sure I would disagree. Except in one field. Art. That’s where it all goes wrong.

It’s a point whispered at first, then hammered home, by a notably interesting selection of Victorian sculpture that has opened at Tate Britain. It’s a beautifully put-together show, excellently arranged and perfectly paced. Everything about it is impressive. Except the art, which is often silly, always arch and, above all, massively disconnected.

That’s clear from the first exhibit, a sculpture of Victoria herself, carved by Francis Chantrey in 1840. When I say carved, I’m being generous. Chantrey’s gleaming white bust of the young queen, just a few years into her reign, is a naughty thing. It shows her from the bust up, dressed in an off-the-shoulder blouse that I have to describe as sexy. Her shoulders are naked. Her neck is delightful. Her face is young and pert. And at the front of the skimpy blouse, there’s a large bow that demands — positively demands — to be untied. Phew.

In fact, Chantrey’s bust of the teenage queen was not carved by him in any meaningful sense of the word. What actually happened — it’s all explained in the show’s helpful labels — was that Victoria’s appearance was recorded first with a camera lucida, an optical gadget that uses mirrors to project an image onto paper, which you can trace. Having got his drawings, Chantrey then made an exact clay model based on them, and this was used to create a mould, then a plaster cast. After that, the precise dimensions of the plaster cast were transferred to a block of marble by assistants using a contraption called a “pointing machine”, which apparently reduced marble carving times by half. The chief assistant, James Heffernan, did the final carving. Chantrey barely touched it. Damien Hirst, eat your heart out.

I detail this here because it is extraordinary, ingenious and typical of the Victorian approach to art. Small wonder the resulting marble babe could, with a name change, pass for almost any classical nymph or heroine. The other Victoria, the one created at the far end of her reign, massive, unsmiling and Hanoverian, appears here as well in an avalanche of forms — busts, monuments, carvings, castings, coins, plaques and medals. There’s even a computer corner in which you can click and choose from all the interchangeable sculptures of her scattered about the squares of the empire, from Jamaica to Hong Kong. She was the most pictured queen there had ever been. And, just like Caesar before her, and Mao Tse-tung after her, she marked out her territory with mass-produced images of herself. 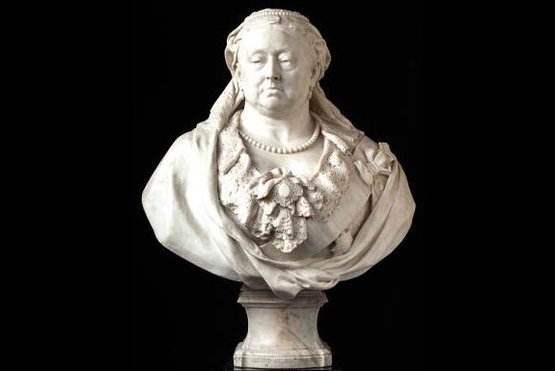 This, then, is a show about art not as a vehicle of individual expression, but as the collective expression of an age. The display ahead is usually fascinating when it describes the dazzling technical innovations involved in the production of Victorian art, and usually ridiculous when it shows us what they actually made.

For example, among the earliest exhibits is a figure of the Magna Carta knight the Earl of Winchester, fully life-size, in his best dragon-bashing gear — battle-axe, chain mail, cross of St George. He was actually produced in 1854 for the House of Lords, whence he has been lent here for the first time. And no, he isn’t made of heroic ancient bronze, as you’d imagine, but of “zinc coated with copper by the electro process, and chemically tinted as required”. What we have here are Magna Carta moods achieved with Sheffield cutlery methods. It’s the Victorian age in a nutshell.

The show ahead examines different aspects of this fundamental disconnect. In the section looking at the empire, we see a huge Minton elephant trundling by, 7ft tall, yet fired outrageously in one piece, in an experimental kiln with widened doorways. Although it looks as if it belongs in the palace of a 17th-century Mughal maharaja, it was actually made in 1889 for the Exposition Universelle in Paris, the same event that gave us the Eiffel Tower.

It’s all very confusing. Where does real history begin and ersatz history end? Just as unreliable as the pretend Mughal and the pretend gothic is the pretend classicism. Although it generally looks as fey and delicate as a Wedgwood biscuit box, Victorian neoclassicism turns out to be brutally unsubtle and un-nuanced.

Look, if you must, at Lord Leighton’s famous bronze of a naked athlete wrestling with a python. It was inspired by that ancient masterpiece in the Vatican Museum, the Laocoön, in which a family of struggling Trojans is attacked by a giant serpent. The present show allows you to compare the two. In the Greek original, doubt, despair, confusion are evidenced brilliantly on the faces of the struggling Laocoön and his sons. In the Leighton, it’s more like a scene from Tarzan, as an absurdly overmuscled bodybuilder grasps the huge python by the neck and stares it angrily in the eye, like an overendowed porn star spanking his monkey. Talk about unsubtle Freudian slips.

So what’s going on here? To me, it looks like the kind of thing you get with toothpaste tubes when you squeeze at one end and everything shoots out the other. The constant references to the past, the relentless fake medievalism, the recurrent imagining of big moments of heroism and, in particular, the endless picturing of pretty young girls in various states of fantasy undress, pretending to be Venuses and Vestal Virgins, is a spectacularly obvious example of the repressed id having its say.

Victoria came to the throne in 1837 and died in 1901, which ought normally to have been enough time for at least three big shifts in style. In fact, there were none. James Sherwood Westmacott’s electroplated Magna Carta knight from 1854 sits at exactly the same round table as Edward Onslow Ford’s particularly absurd St George from 1901, a silver salt cellar in which — get this — you put the salt in one of the dragon’s wings and the pepper in the other.

Thus, all the brilliant engineering and scientific research that prompts so much technical variety in the exhibited sculpture achieves no variety whatsoever in depth and mood. The art of Pompeii has more emotional range than the sculpture of the Victorians.

Artistically, the best moments come right at the death, when we finally notice the arrival of the Arts and Crafts movement. Yes, in 1911, William Reynolds-Stephens has no cultural right to be imagining Elizabeth I of England and Philip II of Spain replaying the invasion of the Armada on a chess set, but there’s something cheeky about the notion, and something playful about the technique, that’s very welcome.