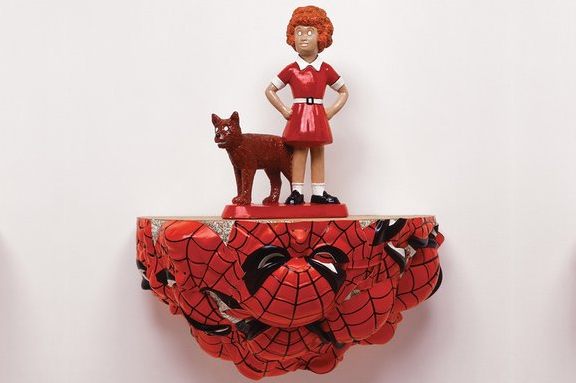 Have you ever had profound artistic thoughts about shelves? Me neither. In my life, shelves have only ever featured in a humble weight-bearing capacity. But now, at the Serpentine Galleries, two separate artists, from two separate continents, have come together for an ambitious exploration of the aesthetic potential of the shelf.

Haim Steinbach is a shelf artist with a notable past. In 1987, he popped up at the Saatchi Gallery — alongside Jeff Koons, Peter Halley, Ashley Bickerton — in a pioneering show called New York Art Now. So exciting and fresh was this show that it inspired a generation of British students to seek to emulate their American cousins by mounting their own cocky confrontation with the textures and rhythms of urban modernity. Their leader was a noisy lad from Leeds named Damien Hirst. The show they mounted was a history-changing event called Freeze.

But that was then. Between then and now, Steinbach’s career has ducked behind a bus. This Serpentine retrospective is the first proper airing of his work in Britain since the Saatchi unveiling. Anyone who expects his work to have changed radically, however, will be disappointed. In New York Art Now, Steinbach showed shelves with things on them. In this Serpentine rewarming, he shows shelves with things on them.

There is, at least, a prequel. Before he discovered the shelf, Steinbach, it turns out, was a minimalist who painted black canvases with coloured stripes around their edges. The Serpentine’s journey through his career begins with a row of them. They’re rather pretty — too pretty. Real minimalism is Trappist and hardcore: you could never knit a Carl Andre sculpture into a lovely jumper. You could, alas, do exactly that to a Haim Steinbach pattern from 1975.

That Steinbach himself was aware of these minimalist shortcomings is made clear by the career arc that follows. The Serpentine display gets busier and busier and busier. At some point in the decade before the big Saatchi unveiling, Steinbach claimed his own little niche in the post-pop cosmos by discovering the display potential of the shelf. The first example here, from 1975, features three green toys — Snoopy, a baseball player, a train — arranged on a plain wooden one. Because all the toys are green, and the shelf itself is so spartan, there’s a pleasing air of unity to the ensemble. If Shakers made pop art, it would come out like this. 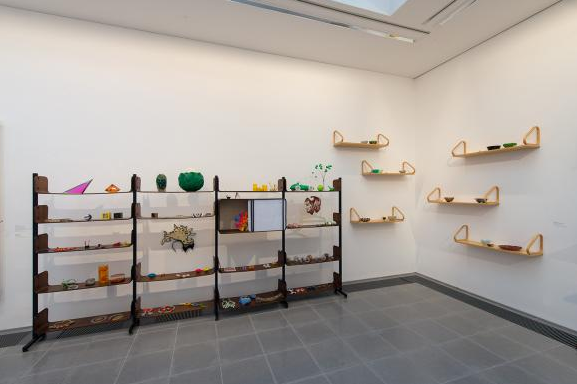 Unfortunately, having sneaked modestly into Steinbach’s output, the shelf spends the rest of this event dominating it. A typical mid-career Haim Steinbach will consist of a shelf unit nailed together from pieces of blotchy driftwood, on which is displayed a childish piece of Americana: a row of teddy bears in GI uniforms; a packet of Ajax cleaning powder; a figurine of Little Orphan Annie and her dog. (I looked her up: she was a popular cartoon character from the 1920s whose catchphrase was “leapin’ lizards”!)

Now, teddy bears in GI uniforms have to have satirical ambitions, no? And putting cartoon characters on a shelf has to be a sly way of mocking the American dream, right? Wrong. The show ahead proves otherwise. What Steinbach is celebrating here is the shelf’s ability to endow anything you put on it with a special air. Throw an Annie figurine into a box and it’s just a toy. Give it a shelf to stand on, put it up on the wall and — leapin’ lizards! — it becomes a personal statement charged with meaning.

This guiding principle leads quickly to an outpouring of artistic drivel that lasts the rest of the display. Winding between two galleries is an extra-long shelf on which are arranged pairs of salt and pepper shakers donated by persons associated with the show: curators and the like. One pair is shaped like a cactus. Another like two pandas. One has a nautical theme. Another is inspired by vegetables.

The plan here is to make you focus anew on these humble objects and notice their underappreciated individuality. Bah, humbug, say I. I turn to art for lots of things, but the admiration of someone else’s pepper pots is definitely not one of them.

More alarming still is the selection of artworks by other artists scattered about a monstrous scaffold that dominates the central gallery. Ugo Rondinone has sent four illusionistic tangerines. Liam Gillick, Britain’s most boring artist, is represented by a multicoloured grid of aluminium rods. There’s a small bronze by Henry Moore. And a painting by Daniel Maclise of some children being told a ghost story. By lumping them all together on a chaotic scaffold, Steinbach has successfully killed all their artistic force and personality. I felt sorry for every single artist press-ganged into this jumble sale — even Gillick. 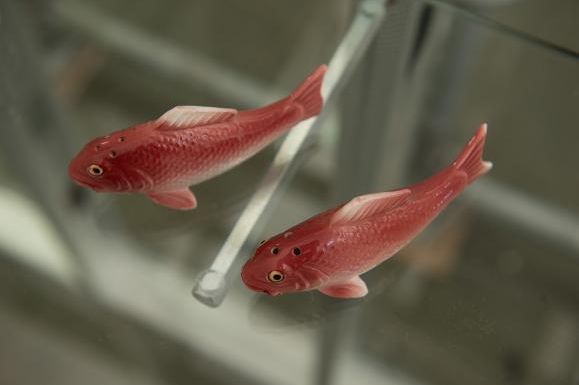 What we’re actually witnessing here is an abnegation of artistic responsibility. The big curatorial idea of the moment, much favoured by the Serpentine, is that curators and visitors are artists, too, and that a trip to an exhibition is an opportunity for gallery-goers to shape the event in their own creative likeness. It’s what they call “audience participation”. What it really is is the peddling of cultural snake oil. Do you go to the ballet to watch yourself dancing? Do you go to the theatre to hear your own words? Steinbach is selling the audience its own creativity.

The second Serpentine event about shelves is the handiwork of Marco Gamper, an Italian designer based in London, who has filled the Serpentine Sackler Gallery, the one designed by Zaha Hadid, with an assortment of shelving systems produced by dozens of other modern designers: Gio Ponti, Ettore Sottsass, Franco Albini. The shelves come in all shapes and colours, and each of them is used here to display a different selection of collector’s items: old albums, wooden spoons, bits of taxidermy.

I cannot say I have ever hungered to be made this familiar with the design history of international shelving systems. What is useful, though, is the framing that takes place here of the shelf’s modern identity: not as a load-bearing storage mechanism, but as a small private museum on which shelf owners can express their own creativity.

That insight makes this a marginally more useful event. I would nevertheless like to launch a new pressure group forthwith, and to nominate myself as its president. I’m calling it CARSIE — the Campaign Against Repetitive Shelving in Exhibitions.