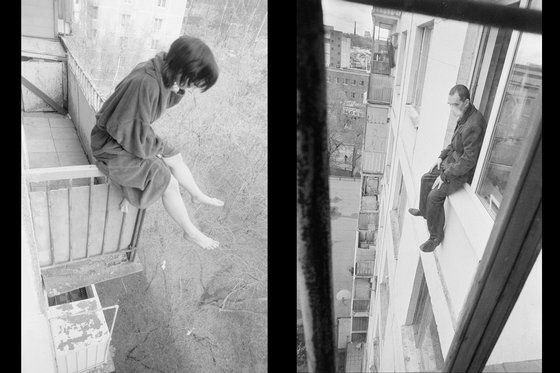 For some of the most shocking, moving, disquieting and powerful imagery you will ever see in an art exhibition, I recommend a visit to the new Russian show at the Saatchi Gallery. Some people will believe you should not take your children to this display, and I leave that up to you, but I would certainly take my children. The sights on offer here are as vivid a warning as they will ever receive of the terrible things that collapsing societies are capable of doing to their citizens; and the even worse things those citizens go on to do to themselves.

Was there ever a harsher place to live than the remnants of the old Soviet Union? I suppose there must have been, but, right now, after a roomful of Boris Mikhailov’s gripping ­photographs, I cannot imagine where or when. Taken in Kharkov, Ukraine, in 1997-8, his snapshots of street kids and tramps, prostitutes and drunks, drug addicts and rag-pickers, soaked in Chernobyl radiation and pickled in home-made vodka, slap you about the face and force you to pay ­attention in the manner popularised by East German border guards in the 1980s. (I speak from personal experience, but it’s a long story.)

The Saatchi Gallery has given Mikhailov two big rooms in which to scare us. Both are full of startling imagery. A beaten-up woman with a black eye gulps a beer with the cross-eyed partner who hit her. A pre­pubescent street kid, puffing on a fag, lifts up the shirt of his prepubescent sister and gives her boobies a squeeze for the lads. A naked 40-year-old prostitute and her naked 60-year-old mother jointly show off the most intimate scars of their profession. We are watching a society reversing out of the process we call civilisation: slithering underground, turning feral. To make it all even worse, most of the photographs are taken in the snow, so not only do you feel the extra-cold of the post-Soviet winter deep-freezing the bones of Mikhailov’s unfortunates, the snow itself seems to frame their predicament in white, making it even clearer.

As I stumbled past these unhappy sights, trying not to cry, the artist who kept popping into my mind was Goya. He, too, refused to avert his gaze from the deepest darkness of his times, trying instead to make that darkness so obvious that missing it required a deliberate act of avoidance. To my eyes, Mikhailov’s Kharkov photographs rank alongside the Chapman brothers’ masterpiece, Hell, as the most important political art of recent years.

Perversely, the Saatchi show they appear in takes its title from a notorious quote by Stalin, who said, in 1935, that “Gaiety is the most outstanding feature of the Soviet Union”. It was a ludicrous claim, and it’s been chosen for the title here precisely because it was so flagrantly untrue. On the catalogue, Stalin’s words are ­displayed beneath a Mikhailov close-up of a tramp’s mouth with one rotten tooth left in it, ringed by a rainforest of slimy beard. Thus, the photo says one thing, the quote says another, and together they set the show’s agenda, in a sneaky, sarky, occluded and typically Russian fashion.

Although Mikhailov is the outstanding artist here, the show actually includes work by 18 artists, and presents itself as a survey of new Russian art. The exhibitors come from Russia itself, or from the surrounding ring of post-Soviet states. All the usual Saatchi suspects are present, by which I mean all the ­different kinds of artist you invariably find in a Saatchi show. There’s a doomy painter who lets black do most of the work (Janis Avotins); a punkish, cartoon-loving slacker, obsessed with sex (Tamuna Sirbiladze); a minimalist, so modest you can easily miss her (Liudmila Konstantinova); and a sculptor whose work looks as if it has been pulled out of a fire, and who seeks, therefore, to pinch the instant depth that charring always brings (Nika Neelova).

All the above may perhaps have appeared more substantial in another display, but here they are made to look like makeweights by the urgency and power of Mikhailov and of two other outstanding exhibitors. All three are photographers working mainly in black and white. All three highlight the misery of the post-Soviet world. All three, including Mikhailov, throw something unexpected into their mix: humour.

If you look up from the rotten mouth of the tramp on the cover of the catalogue, you’ll see that his eyes are actually bursting with merriment. It’s partly due to drunkenness, for sure. And it’s certainly not gaiety. But it is hilarity, of a particularly fierce and nihilistic Russian variety. Mooning at the devil? Laughing in the face of death? The urge to guffaw does indeed seem to be chained up in the basement of these scary Russian psyches. It’s as if Russian mothers pass on to their offspring in their milk a psychic defence that no evil despot, no national tragedy, no wicked social legislation, will ever fully breach — the mocking laugh.

Thus, Vikenti Nilin photographs people sitting nonchal­antly on window ledges, high up on the edges of run-of-the-mill Soviet apartment blocks, legs dangling, eyes down. At first, you assume they are all suicides waiting for their moment, and that this, too, is a comment on the grimness of post-Soviet life. One slip and they’d all be dead. But something un-tragic about the mood of the pictures causes you to examine the victims more closely. And you begin to notice unexpected things about them. All the men appear to be wearing the same suit. And the same shoes. And the same shirt, rolled over their jacket sleeves in the same way. The ­fatter ones stretch the suit. The thinner ones are engulfed by it. These are supposed to be tragic situations, but it is the drolleries and the absurdities that are being enjoyed here.

There is also something weirdly comic about Sergei Vasiliev’s exciting portraits of tattooed criminals in Russian jails. If you want to see bad ­tattooing at its worst, peer at the overcrowded skins of these preening Soviet delinquents. Apparently, each tattoo has a secret meaning that only the criminal gangs understand, but there are enough swastikas and crosses and religious icons scattered among the messy nudes to make the final effect unmistakeably fascistic.

Like all sporters of tattoos, the Russian prisoners are trying desperately to look tough. But most are so skinny, they are little more than tattooed skeletons. On all their faces, I could sense a powerful unseriousness tugging at the corners of their lips.

As if Gaiety didn’t offer enough hardcore Russian experience for any viewer, the Saatchi Gallery has simultaneously opened a second show, devoted to the art made in Moscow in the years 1960-89. This is art made illegally, under the nose of the government. There’s a lot of it, the display is busy and ­rambling, and I advise you to think carefully about where you pause. Just because it’s dissident art, that doesn’t mean it’s any good. I remember being sent to Russia to write about this stuff when Brezhnev was alive, and discovering that most of it consisted of crucified nudes wearing Wrangler jeans. It was some of the worst art I have ever seen.

So I advise you to head straight for Komar and Melamid’s work, and particularly their hilarious send-ups of socialist-realist painting. See that dark and sumptuous ­religious image of a bare-footed old man praying in front of a mirror, based on Caravaggio’s gorgeous portrait of Mary Magdalene? That’s not any old man. That’s Stalin.