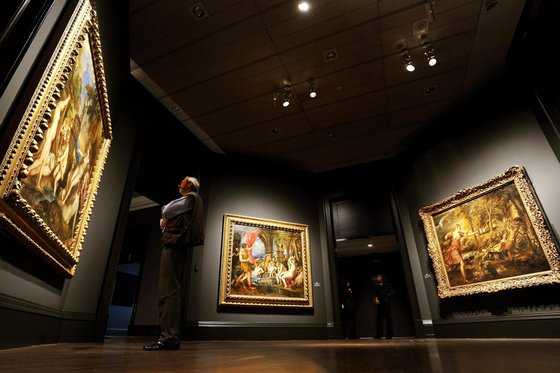 Metamorphosis, at the National Gallery, is such a complicated show that I am going to have to adopt a numbering system to plot my way though this review. I have gone for the simplest of all numbering systems: the list.

The fifth best thing about this show is its variety. You will surely never have seen an exhibition made of this many different components. There are costumes here, poems, paintings, a three-legged machine with a light on it, a real nude woman, a film about the Royal Ballet, a row of television screens, some models for stage sets and, at the centre, three gripping masterpieces by Titian. See what I mean about the complication?

The fourth best thing here is the way we are plunged into the sexy and delightful mythological world created for us by the Roman poet Ovid. As well as being a word that describes the state of passing between states, Metamorphosis, in its plural form, is the title of Ovid’s famous selection of stories about the love affairs of the gods. What a naughty book. Whenever in art you see a Roman god inveigling his or her way into the underwear of a mortal, you can be confident that Ovid’s Meta­morphoses is the source of the sex.

The king of the gods, Jupiter, was particularly guilty of adopting outrageous disguises to get his filthy way with beautiful nymphs. At the National Gallery, in the most poignant of Titian’s poetic evocations of Ovid, poor Callisto is being stripped by the handmaidens of Diana, the goddess of the hunt, to reveal a pregnant stomach. Jupiter, the divine cad, had seduced her while disguised as — wait for it — Diana herself! Callisto, who loved Diana wholeheartedly, allowed the lesbian seduction, not realising Diana was Jupiter. When the real Diana saw Callisto’s pregnancy, she was livid and expelled her from the hunt. Juno, Jupiter’s wife, later turned her favourite handmaiden into a bear.

Titian’s marvellous evocation of these crazy events hangs at the centre of the show, next to his equally complicated presentation of the fateful encounter between Diana and Actaeon, the handsome huntsman who comes across the goddess bathing naked in a forest glade. As punishment for glimpsing her nudity, Actaeon is turned into a stag by Diana. Finally and tragically, in the third Titian on display, Actaeon the stag is hunted down by his own dogs. Phew. When you tackle Ovid, you enter a spaghetti junction of knotted realities.

The third best thing about the show is its collegiate atmosphere: the sense you get here of many art forms working together. Radiating out from the three Titians are various responses in other media. The world of ballet has commissioned an evening of new dances that are showing at the Royal Opera House this week. I cannot comment on the success of these ballets — they have not premiered as I write — but an engrossing film playing in the show takes us backstage for the rehearsals and introduces us to the seven choreo­graphers. Watching Alastair Marriott leading a pair of young athletes through their totterings and climbings made me want to see his contribution fiercely. Getting ballet involved is a piece of inspired exhibition casting by the National Gallery, as well as a particularly suitable response to the bodily promptings of Ovid and Titian.

The world of music has responded by supplying scores for the new dances by Mark-Anthony Turnage, Nico Muhly and Jonathan Dove, while the world of poetry has issued a collection of writings by an assortment of well-known British poets. Alas, the standard of this poetic response is low. Modern poets are mostly minimalists, and few are comfortable with big classical ideas. I enjoyed Tony Harrison’s opinion of Titian’s full-bottomed Diana — “scorned by connoisseurs of scrawn”. But Seamus Heaney labours horribly to grasp the Mediterranean rhythms of Actaeon’s predicament and ends up with a clunky Irish farmyard scene: “And it was no human sweat/That steamed off him: he was like a beast in heat,/As if he’d prowled and stalked until he found.”

This hopping between art forms — I’m doing my bit by pretending to be a poetry critic — forces all the contributors out of their comfort zones and results in the second best thing about the show, which is its sense of adventure. Conrad Shawcross is a contemporary artist who has never impressed me much before. His shows always involve the creation of wacky machines that do strange, whirly things. It’s hardly natural Titian territory. Here he gives us an eerie steel tripod with a mechanical arm that moves up and down, in and out, inspecting a set of finely crafted wooden antlers by shining a light on them. The eerie metal machine comes from an entirely different aesthetic order to the one painted by Titian, but the sense of threat and danger, and the atmosphere of inspection, are valuable pointers to Titian’s easy-to-miss darkness. Shawcross’s costume designs for the ballet at the Royal Opera House are also the best of the costume designs.

I was less impressed with Mark Wallinger’s showy contribution. Inspired by the voyeurism that Ovid loved to describe, Wallinger has created a live peep show featuring a naked woman taking a shower. Locked away in a black wooden box, the showering woman can be spied on, in the round, through four openings: a key hole, a broken window, some upturned blinds and a two-way mirror. As you circle her black bathroom, you have no choice but to play the peeping tom.

As exhibition bait to draw the crowds, Wallinger’s peep show will certainly be successful. As art, it is inert, exploitative, knowing, manipulative and shallow. Its true parallels are not with Titian, but with those ads you see in lads’ mags that use naked girls to sell a car.

Chris Ofili tries hardest to mimic the spirit of Titian by painting an assortment of naked couples clawing at each other ecstatically in a jungle. He is brave to risk such direct parallels. Unfortunately, he ends up looking thoroughly out of his depth, shown up by the best things here, which are, of course, the three Titians.

I was interested to read, in Sheila Hale’s huge new biography of the artist, that Titian could not read Latin and would have known Ovid only through racy abridgements. Thus, his responses to Ovid are responses to life, not literature. The reason Titian is the greatest painter there has been of female flesh is because, you feel, he has poked and pinched a lot of it in his time. When Titian paints the naked Diana, he paints cellulite and padding, wobbly flesh you can clasp and pull. He was so good at water, too: the burble of a fountain, the sensuous bubbling of a hot spring. In Titian, the pack of entertaining lies that Ovid tells has metamorphosed into such a tangible set of truths.