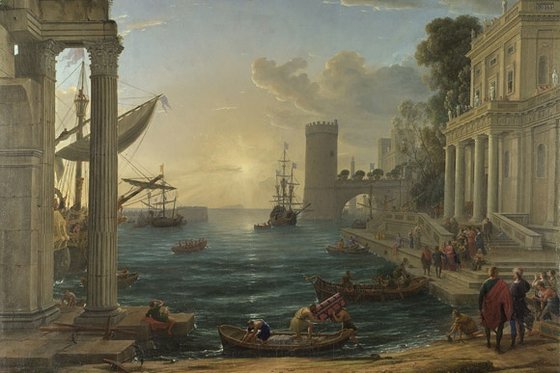 Clunky title, fascinating event. Turner Inspired: In the Light of Claude, at the National Gallery, is a study of the curious relationship between two painters from divergent corners of art history. In essence, they were very different artists, with a vastly different emotional range, but taste and ­circumstances brought Turner and Claude together, and their restless, one-sided, unusual relationship is now the subject of one of those detailed and intelligent National Gallery examinations that makes you want to buy an ox and sacrifice it on an altar in thanks for this great museum.

Two-handers are a cunning way to please two ­audiences. They can, however, appear forced: a roping together rather than a pas de deux. What makes this pairing so effective is the unforced sense of give and take that drives the display. Two very different artists have entered into an unusually intimate relationship. One, Claude Lorrain (1604/5-1682), is a sleeping partner who contributes nothing active to the interplay. The other, Turner (1775-1851), is a stalker from another century, an obsessive admirer who studies his prey from afar, then steps in to consume it.

This is supposed to be a show about light — the way these two great masters of landscape represented it and shared it — but just as interesting to my eyes is the dark psychology of their pairing. Turner may well have entered into the relationship as an impressionable acolyte, but he spends this entire display trying to better Claude. By the end, he appears actively determined to nuke him: ­nothing in art feels quite as atomic as a full-screen, full-on Turner sunset.

Claude was born near Nancy, in the province of Lorraine, and, according to an oft-repeated art legend, trained initially as a pastry cook. He wasn’t much good at pies, however, and in his early teens left France for Italy, where he remained for most of his unusually long career, ­churning out huge, light-filled views of the Italian countryside. So popular were they that by his forties he was the ­highest-earning painter in Europe. ­English collectors were particularly fond of him.

Turner would therefore have had no difficulty encountering and admiring Claude. We, on the other hand, have a tendency to hurry past him. While it is certainly not true that all Claudes look the same, it remains more than a little true that they often feel similar. A typical Claude will feature a big view of the Roman campagna at the end of the day, when the light is golden. There will probably be water and almost certainly some ruins. In the foreground, a cluster of tiny figures in togas will be acting out some familiar moment from a Greek or Roman myth: Apollo will be dancing with his muses, or Jupiter will be seducing Io. As a weak Italian sun climbs down from a huge sky, the pretty landscape below will be bathed in an amber glow and a comforting message will appear to echo through it: all is well in the land; the gods are at play; it’s time for bed.

At their best — and the selection here is very fine — Claude’s landscapes have a sophisticated sadness to them that enlarges their message and makes it feel like a worldview. Something beautiful has gone for ever — a day, an epoch, a state of innocence. But the emotional charge of these dreamy vistas can feel mass-produced and dull. If Turner is a burning furnace, Claude is the light from a low-energy bulb. Hanging side by side in the first room, and making the differences between the two immediately ­obvious, are two versions of a landscape with Echo and Narcissus — one painted by Claude in 1644, the other by Turner in 1804. The Claude has an insistent air of artifice about it. The landscape is a theatre set and the tiny figures emoting in its foreground are players. At the front, a tiny Echo stretches out naked on the grass, while the self-obsessed Narcissus studies his reflection in a pool of water behind her. Echo has fallen in love with Narcissus, who is too self-obsessed to notice. As Narcissus’s lack of interest grows, so Echo’s physical presence diminishes, until all that is left of her is her pleading voice repeating its ­hopeless lament: Narcissus, I love you.

One of the best things about Claude is the pleasing poetic linkage he establishes between his landscapes and his story lines. Here, the dreamy landscape through which Echo’s tragic plea seems to echo reaches the horizon in three clear steps, like the flaps of a stage set: dark trees in the foreground; a mid-toned middle-ground; and a pale backcloth at the top of the rake. It’s very picturesque, yes, but so carefully manufactured.

Turner, tackling the same scene, is supposed to be responding to Claude, but looks more like he’s tearing up the script. Gone is the sense of delicate poetry. Gone is the air of delightful artifice. Gone is the cool evening light. Gone, even, is the sexless atmosphere Claude prefers for his love scenes. It’s as if someone has set the campagna on fire. Big yellows and oranges elbow out the greens and greys. Instead of retreating towards the horizon in three legible stages, the landscape blazes excitedly from left to right. And where Claude’s Echo is a little pink statue, not a naked woman, Turner gives us a miniature Rokeby Venus: an enticing back view that you would love to see from the front. Immediately more exciting, immediately pitched on a higher emotional register, this is a master/pupil relationship in which the roles are immediately reversed.

The show ahead consists of ever clearer evidence that Turner was a great and tremendous artist, Claude a charming one. At the heart of the display is the famous face-off between their two views of ancient Carthage; a face-off Turner engineered when he left his work to the nation, on the condition that these two works always hang together. Which they usually do, in the National’s octagonal gallery.

In Claude’s Seaport with the Embarkation of the Queen of Sheba, the weak beam from a low sun on the horizon seems barely to reach the shore, and even the figures humping stuff onto boats in the foreground appear utterly exhausted. But when Turner adopts more or less the same viewpoint, he flicks a switch and the electricity surges on. The sun is rebooted to its nuclear setting. A volcano erupts in the bay and the waters boil.

The usual interpretation of Turner’s insistence that his work hangs next to Claude’s is that it was intended as a homage: a pupil’s thanks to his master. But I no longer believe that. On this evidence, Turner’s great burst of atomic sunshine constitutes an effort to flatten Claude in battle. This wasn’t an homage. This was a beating-up.